MTV Some "Jersey Shore" fans are not pleased with Angelina Pivarnick.

Some Jersey Shore fans are not pleased with Angelina Pivarnick. The star received backlash after she posted a pregnancy tease.

As first noted by Asbury Park Press, Angelina shared a photo of a sonogram on December 31 and wrote, “So excited to finally share our news!” and directed followers to a linked Champion Daily article. However, the article didn’t break the news of Angelina’s rumored pregnancy; instead, it was a story about recaps from season 4 of Jersey Shore Family Vacation. At the end of the story, it merely mentions that Angelina and her husband, Chris Larangiera, would like to have children in the future.

Heavy reached out to Angelina for comment but hasn’t heard back.

“She ain’t pregnant what a waste of time,” one person wrote.

“Seriously who the hell does something like that. Just Wow,” another said.

Some even found the post triggering. “As a woman who is currently going through infertility treatment and wondering if I’ll face a third miscarriage, that was a horrible thing to post just for click bait,” one follower told her. “Thanks for that stab in the heart girl.”

It’s not the first time Angelina has upset fans by posting misleading stories. At the beginning of season 4 of Jersey Shore Family Vacation, Lauren Sorrentino was open with Angelina about some of the things that the roommates didn’t like about Angelina, one of which was the way she conducts herself on social media.

Lauren was the first of the Jersey Shore girls to reunite with Angelina after her wedding, and she stood up for Nicole “Snooki” Polizzi, Jenni “JWoww” Farley and Deena Cortese after their mean-spirited wedding toast. 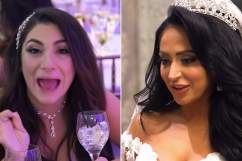 “If you had taken the high road and said you know what, that’s a low blow, I didn’t think those jokes were funny but I’m going to talk to them in private because I don’t want to make this any bigger than it is …” Lauren told the Staten Island native, as cited by the APP.

She then pointed out a moment when Angelina made an unkind statement, reminding her that she brought up Mike going to jail for tax evasion while Lauren was wedding dress shopping. Lauren said she decided to not pay attention to Angelina’s comments, because she didn’t want it to become a big deal, and she accused Angelina of making the wedding speech a huge issue by continuing to talk about it.

“I chose not to have a reaction because as an adult if you’re going to put attention on something, you’re going to make it get bigger,” she told her. “You’re making everything be, for lack of a better word, dramatic.”

While Angelina is not expecting a baby – -as far as social media users know — there are two Jersey Shore stars who will become mothers in 2021. Both Lauren and Deena announced at the end of 2020 that they are going to have baby boys. Deena is already a mother to her son, Christopher, and Lauren is pregnant with her first child.

Lauren and Mike have been providing weekly updates since she confirmed her pregnancy. They revealed the baby’s sex by lighting up their Christmas tree, which turned blue when they flipped the switch. The “Situations” have been cautious during the pregnancy because of the coronavirus pandemic, choosing to do their gender reveal virtually instead of in person.