Getty Nicole Polizzi arrives for the 2019 MTV Video Music Awards at the Prudential Center in Newark, New Jersey on August 26, 2019.

Nicole “Snooki” Polizzi is making a big return to “Jersey Shore.” The longtime MTV star quit the reality show in late 2019, but she has confirmed her return on her Instagram story—and she even appears in the new promo for the show.

Fans had a strong reason to believe she’d be back. The Snooki Shop owner was recently seen with co-star Angelina Pivarnick and a camera crew at Lucco Cucina + Bar in Florham Park, New Jersey, according to a photo posted by TMZ. But the new promo is the first official confirmation that Snooki is back as a “Jersey Shore” cast member.

A new promo for the second half of “Jersey Shore: Family Vacation’s” fourth season features the cast playing wintery games at a snowy resort in the Poconos.

“The entire family is back together, it is everything,” teases Deena Cortese.

The cast tease big moments, such as Jenni “JWoww” Farley’s recent engagement,  and some new additions — as in, Mike “The Situation” Sorrentino Sorrentino’s soon-to-be-born baby!

But the big surprise comes at the end when Snooki pops out of an oversized cake holding a couple of bottles of champagne.

“Ladies and gentleman, the party’s here,” says The Situation.

On her Instagram story, Snooki captioned the promo video with the message: “I’m back, B-tches! I’m bringing the party back when #JSFamily Vacation returns Jerzday, June 3rd on @MTV!”

In a second post, she captioned a pic of her cake entrance with, “Missed my besties.”

Snooki Stepped Away From ‘Jersey Shore’ to Be With Her Kids 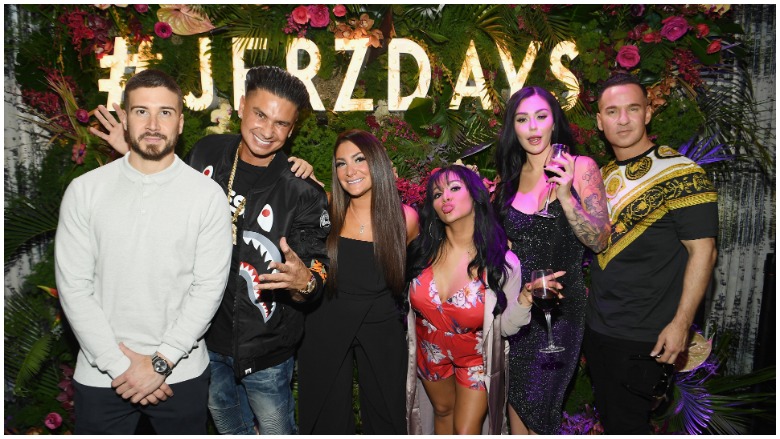 In an interview with the AV Club, the mom of three revealed that the once-fun show got “too heavy” and was “mentally draining” for her. She also denounced the mean girl drama that went on during her final season.

But several of her co-stars spoke out to predict Snooki would eventually come back to the “Jersey Shore’ family.  Pauly DelVecchio told Us Weekly that Snooki has a “super” fear of missing out.

“She’s in the loop on everything,” he said. “So, to me, it feels like she didn’t quit. She’s there. I just hope that she comes back, and I think she will. I don’t know. We’ll see. I think she will.”

Fans will see a lot more of Snooki on TV in the coming weeks. In addition to “Jersey Shore” return, she’ll appear on MTV’s Movie and TV Awards on Sunday, May 16. Snooki, JWoww, Vinny Guadagnino, and  Angelina Pivarnick are all slated to present at the annual awards show, according to People. In addition. “Jersey Shore: Family Vacation” is up for awards for Best Docu-Reality Show and Best Reality Cast.