Snooki has been a hard-working “mawma” since leaving Jersey Shore: Family Vacation – and now she may have scored a Super Bowl timeslot.

The Jersey Shore veteran, who is is set to host HGTV’s new design competition special, Beach Cabana Royale, later this month, is part of a Super Bowl ad campaign for Paramount +, where she is joined by more than a dozen other iconic TV personalities in a series of commercials for the new streaming platform.

The ads premiered during the AFC Championship game last month, and now all eyes are on Super Bowl Sunday to see how the story continues for the unlikely cast of characters.

In her first spot,  seen above, Snooki, whose real name is Nicole Polizzi,  was joined by some impressive TV figures as they trekked tpward Paramount Mountain in the snow.

The Jersey Shore fan-favorite wore a leopard-print fur coat as she shivered her way across the snowy terrain for the expedition along with TV host James Corden, CBS This Morning’s Gayle King, DJ Khaled, Mr. Spock, and animated figures Dora the Explorer and Beavis and Butthead and more.

“This sucks, “ Snooki said in the spot. “I’m too hungover for this!”

Snooki was also seen in another ad in which the adventure-seeking Dora suggested they use her magical talking map to find their way.

Snooki has appeared in two out of four Paramount + pre-Super Bowl ads, as seen on the site’s Instagram page.

The ad campaign will conclude on Super Bowl Sunday with additional 30-second commercials, according to Adweek.

While there has not been official confirmation from Paramount or Snooki that she will make another cameo in the new ads slated for Super Bowl Sunday on February 7, based on the trajectory of the trek-themed clips it would be very surprising if she didn’t.

The Paramount+ Ads Are Not Snooki’s First TV Commercials 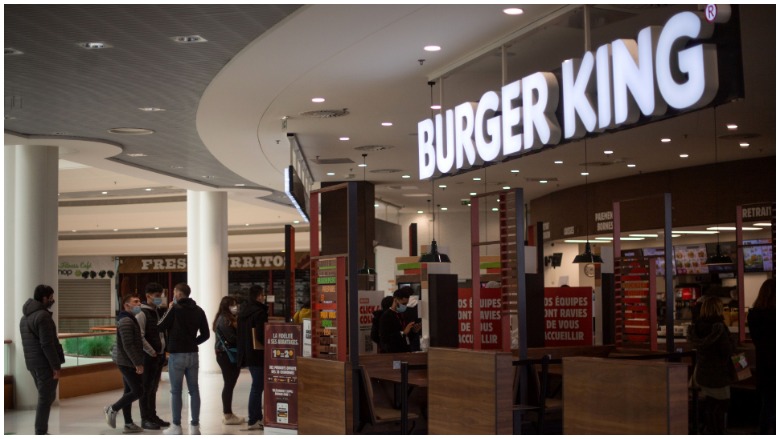 GettyCustomers at the fast food chain Burger King in a shopping mall, on January 13, 2020

Longtime fans know that this is not Snooki’s first time in a TV commercial. In 2017, five years after the original Jersey Shore ended,  she teamed up with costars Mike Sorrentino, Pauly D, Jenni “JWoww” Farley, Deena Cortese,  Vinny Guadagnino, and Sammi “Sweetheart” Giancola for a surprising commercial.

The roommates reunited for a Burger King ad as they sat down for a family dinner with the fast food chain’s Chicken Parmesan sandwiches.

Snooki referenced being hungover in that ad, too, as she talked about how she had two kids since the MTV reality show ended.

“Parenting is kind of like being hungover all the time,” she said in the extended spot set inside a Burger King restaurant. “I don’t want to wake up.  I’m tired,  I’m always screaming. I’m miserable.”

“But it’s the best misery ever,” her best friend, JWoww, chimed in.

The FW also posted a roundup of past commercials starring Jersey Shore stars, including Ronnie Ortiz-Magro‘s pitch for diet aid Xenadrine, The Situation’s spit for Vitamin Water, and Pauly D poking fun at himself in a Miracle Whip commercial. Snooki also once pitched pistachios in a nut ad.