The 66-year old actor teamed up with his 20-year-old daughter, Ella, for an ad for Scotts & Miracle-Gro.

The clip, which can be seen below,  also featured The Office star Leslie David Baker, NASCAR driver Kyle Busch, actor Carl Weathers,  Peloton instructor Emma Lovewell, and lifestyle guru  Martha Stewart as they showed how they were using their backyards for these days.

In the 45-second ad, Stewart was shown picking tomatoes from her perfect garden, while Weathers used his lush yard as a putting green. Baker helmed a backyard barbecue, while Busch drove his lawnmower. Lovewell used her yard for yoga.

Near the end of the clip, the Travoltas made the best use of their yard by turning it into a dance floor.

After Ella showed her dad how to work a selfie stick, the two broke into a TikTok dance, which looked very much like Travolta’s iconic “Born to Hand Jive” dance from his hit 1978 movie, Grease. But instead of a Sha Na Na soundtrack, this time Travolta did his moves to the Surfaces’ song “Sunday Best.”

An enamored next door neighbor Stewart noted of Travolta, “He’s still got it.”

Travolta Originally Performed the Dance Move With Olivia Newton-John in the Famous 1978 Film, But His Co-Star Had a Hard Time Learning The Steps 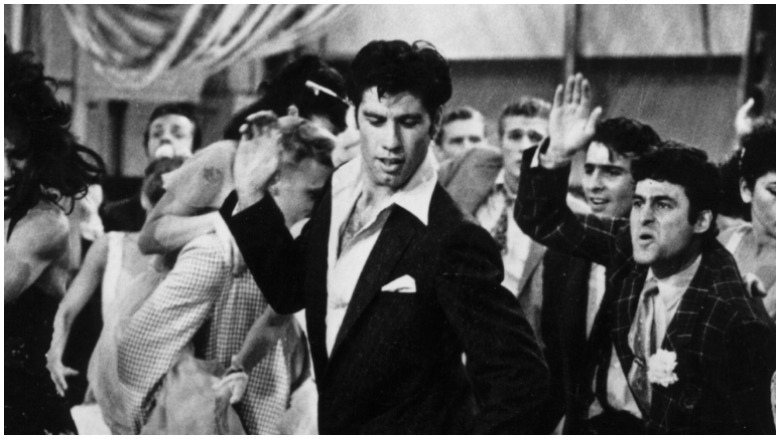 GettyJohn Travolta struts his stuff in the hit musical film ‘Grease’, a romantic comedy set in the 1950’s rock ‘n’ roll era, in which Travolta starred with Olivia Newton-John in 1978

Grease fans surely recall the original dance, which took place at the Rydell High prom in the 1978 movie. Travolta, who played Danny Zuko in the film, showed off his moves alongside partner Olivia Newton-John, who played his date, Sandy.

While Travolta was riding high on the success of the 1977 disco movie Saturday Night Fever at the time and had already shown the world he knew how to dance, Newton-John had a more difficult time with the steps.

In an interview with the Las Vega Sun, the Australian actress and singer credited the film’s choreographer, Pat Birch, for teaching her how to move, as she had no prior experience as a dancer.

“She was amazing,” Newton-John said of the choreographer. “She would watch how you moved naturally and choreographed you to use that movement. It took us a week to rehearse the ‘Hand Jive’ number, and we rehearsed the scene where John lifted me up over and over.”

She added that working on the film was  like “going to dance class every day with the whole cast.”

While seeing Travolta and his daughter show off their “hand jive” dance moves TikTok style was something new, it’s not the first time they’ve been filmed on the dance floor.  Last summer, Travolta shared a clip of him dancing with his daughter in memory of his late wife, Kelly Preston, who died of breast cancer the month before.

“One of Kelly’s favorite things, dancing with me,” he captioned the touching clip.