Stevie J and his wife, R&B singer Faith Evans, recently appeared on OWN’s series Behind Every Man. While discussing their love story, Evans explained why they broke up at one point before they got married. She explained that Stevie J was still involved with his ex-girlfriend Joseline Hernandez so she ended their relationship.

“I wasn’t quite sure whether or not he was still involved with his ex,” she said. “So you know when you kind of told me you guys weren’t together and then shortly thereafter, finding out you still kinda were, I think that’s probably when I stepped away because I’m not a man-stealer, a homewrecker. It was way too much for me. This was the main thing: if you not really serious, please don’t do this to our friendship.”

As seen on Love & Hip Hop: Atlanta, Stevie J, born Steven Jordan, was known for his cheating ways. During the first two seasons of the show, he was involved in a love triangle with Hernandez and Mimi Faust, the mother of his daughter Eva.

When a clip from the show was posted on Onsite’s Instagram page, Hernandez saw it and wasn’t happy with what Evans said and unleashed a slew of insults against the “Never Let You Go” singer, including claims that she had cheated on Jordan.

“I ain’t been with that man in 4 years,” she wrote in the comments section. “I’m happily with @balisticbeats. Every time my TV shows bout to drop this ol wore down melted b**** got something to say to stay relevant. B**** you a h** your own husband told me and my husband last week you cheated on him with young n***** and you do all the time.”

Besides alleging that the Love & Hip Hop star said Evans has been unfaithful, Hernandez claimed that Evans’ son hurt she and Stevie J’s daughter Bonnie Bella.

“I have your husband on recording begging for my forgiveness cause Bonnie could have gotten killed by that animal you call son. That’s why she’s never been under your care since,” she continued. “B**** go make a song. And FYI you been sucking stevie d*** for years before I dropped his sorry a**. Bye h**. And go Watch my 3 TV shows that’s are currently playing on national TV and streaming Networks.” 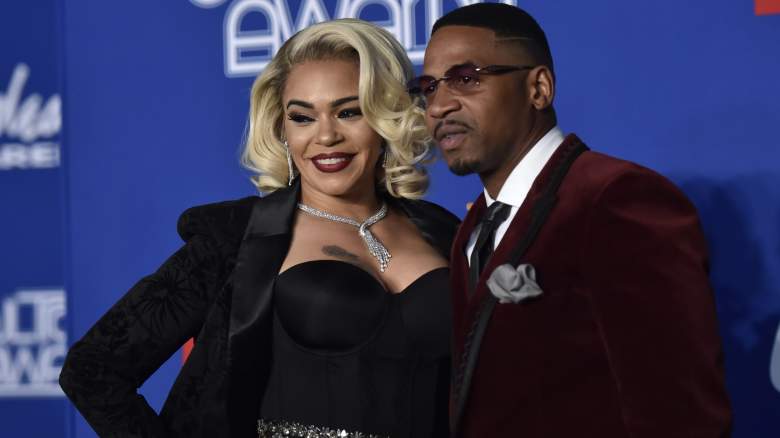 The following month, the 49-year-old producer said he and Evans were not headed for a breakup despite the domestic dispute.

In August 2020, Jordan professed his love for his wife by getting her face tattoo on his midsection. In an Instagram post, he revealed that the massive tattoo of Evans’ potrait that was used for her Keep the Faith album cover.