A former Love & Hip Hop star has dissed Tory Lanez on her new track. Masika Kalysha, known for starring on Love & Hip Hop: Hollywood, released a new track called “Masether” where she threw a shot at the “Jerry Sprunger” singer. She threw a jab because Lanez didn’t have many nice things to say about her on a track called “Sorry I Had To” on his latest album, Daystar.

On “Sorry I Had To” Lanez rapped:

Ayy, Masika, this your chance, you in every Twitter debate
And every Shade Room comment like common sense ain’t common sense
Like we be needin’ your two cents and all your vents
Fakin’ a kidnappin’ for your OnlyFans
And tryna front like missin’ kids was your intent
If that’s the type of sh*t you teachin’ Khari, then you should sit in a pen’
And watch people disagree in the end
You try to make it facts, but it’s a L-I-E in the end

After her followers began posting about her lyrics towards Lanez on social media, Tucker replied on Twitter saying: “I’m not a rapper I was just having fun,” with a laughing emoji.

Tucker is referring to Megan Thee Stallion accusing Lanez of shooting her in her feet back in July.

“Yes, this n**** Tory shot me,” she said on Instagram Live in August. “You shot me and you got your publicist and your people going to these blogs lying and s***. Stop lying. Why lie? I don’t understand. I tried to keep the situation off the internet, but you dragging it. You really f****** dragging it.” 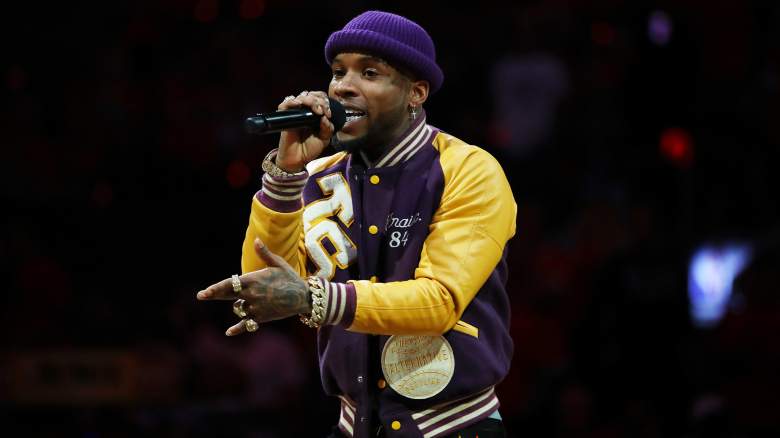 GettyTory Lanez performs during Game Five of the 2019 NBA Finals between the Golden State Warriors and the Toronto Raptors.

According to the Los Angeles County District Attorney’s Office, Lanez, born Daystar Peterson, has been charged with “one felony count each of assault with a semiautomatic firearm – personal use of a firearm – and carrying a loaded, unregistered firearm in a vehicle.” The news release added that:

On July 12, the defendant and the 25-year-old victim got into an argument while riding in an SUV in the Hollywood Hills. The victim exited the vehicle and Peterson is accused of shooting several times at her feet and wounding her.

If convicted as charged, the defendant faces a possible maximum sentence of 22 years and eight months in state prison.

Lanez said he was innocent in an Instagram Live in October.

“It’s crazy because the whole thing about it is — when this whole debacle, or whatever you call it, came about, the whole time was like … She knows what happened, I know what happened, and we know that what you’re saying and what the alleged things and the alleged accusations of my name is [sic] are not true,” he said.