Getty Fireworks during the Macy's Fourth of July celebration on July 4, 2021.

Happy Independence Day! Macy’s annual 4th of July Fireworks Spectacular is just hours away. The televised celebration kicks off at 8 p.m. ET on NBC and on the network’s streaming outlet, Peacock. Read on to find out who is performing and which celebrities are making special appearances.

The Musical Performances Before the Fireworks

What’s your Fourth of July tradition? Ours always includes finishing the night with the iconic #MacysFireworks show.

Don’t forget to tune in to this year’s #MacysFireworks on 7/4 at 8pm ET, live on NBC.https://t.co/xftlibgvis pic.twitter.com/Ye8vejWQLK

Macy’s set high expectations for this year’s pre-fireworks show, promising a musical lineup that will “build an electric atmosphere unlike any show we’ve done before,” according to the event website.

Audiences will see performances from country stars Brett Eldredge and Carly Pearce and can likely expect songs from their respective tours. Pearce has been traveling the country for her “Here and Now” tour. Eldredge recently released his new album “Songs About You” and is slated to start that tour later this month.

Rapper and singer Pitbull, who is gearing up for his “Can’t Stop Us Now” summer tour, will take the stage. According to People, he’ll be joined by singer Filmore. The two artists collaborated on a new single “USA.” Filmore celebrated the song’s July 1 release on his Instagram account.

Freestyle Love Supreme will also join the festivities. The cast includes Lin-Manuel Miranda, James Monroe Iglehart, Kaila Mullady, Dizzy Senze, and Anthony Veneziale. The group, which is described on its website as a “freestyle (hence the name), improvisational, hip-hop comedy show,” wrapped up an off-Broadway run earlier this year.

Jacqueline B. Arnold, Jessica Lee Goldyn, Tasia Jungbauer, and Jeigh Madjus of the Broadway show “Moulin Rouge! The Musical” will take the stage.

The Soundtrack to the Fireworks

As we remember the sacrifices our soldiers make this #memorialday I’m pleased to highlight those who serve as musicians, arrangers, engineers in our military. Honored to record w/ the Army Concert Band, Jazz Ambassadors & Army Chorus for Macy’s 4th of July fireworks show‼️💥🎇🎼 pic.twitter.com/wcChdSF0SX

Macy’s tapped director, producer and composer Ray Chew to lead the musical score for the 46th annual fireworks show. Chew has partnered with Macy’s before as the maestro for the Thanksgiving Day Parade.

Chew told the New York Daily News, “This is a wonderful opportunity to tell the story of an American journey as I saw it and I was able to really include many voices and genres that may not have previously been heard in the score and I wanted to make it an inclusive story. It was very important to me to tell the story of how jazz, which is really America’s classical music, influenced hip-hop… the soundtrack to popular culture. So this year the audience will hear hot music meets John Coltrane and Thelonious Monk.”

Chew will be directing musicians from The United States Army Field Band and Solders’ Chorus, the Young People’s Chorus of New York City, and the band 5 Seconds of Summer, according to Macy’s website.

Tony Award-winning Broadway star Joaquina Kalukango will sing a medley of “My Country ’Tis of Thee” and “America the Beautiful.” Macy’s says she will perform during the “signature Golden Mile moment, where thousands of golden-hued shells create a dramatic cascade effect stretching for more than a mile across the East River.” 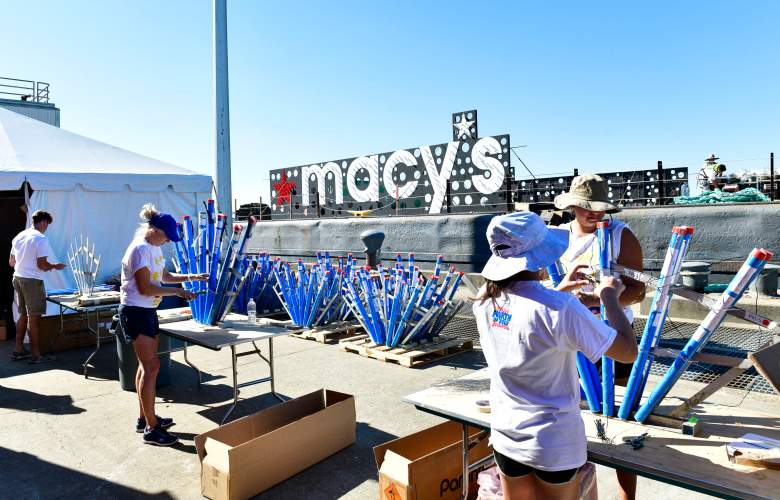 The 4th of July Fireworks Spectacular will also include special appearances from celebrities participating in the annual “American Spirit” segment. Comedian Craig Ferguson, author and TV host Padma Lakshmi, model and actress Paulina Porizkova, and chef Wolfgang Puck will share their personal stories “about what it means to live in the United States,” as NBC New York reported.

Hosting the show is “Today” anchors Craig Melvin and Dylan Dreyer. This is their second time hosting the July 4th event, per Deadline.

The celebration airs live from 8 p.m. – 10 p.m. ET on NBC and streams on Peacock. An encore presentation will begin immediately after at 10 p.m. ET/PT on NBC.