Maria Bakalova is the actress who plays Borat’s daughter in the new Borat Subsequent Moviefilm by Sacha Baron Cohen. In the film, she’s involved in a controversial scene with Rudy Giuliani, in which the two are alone in a hotel room and he puts his hand down his pants.

According to The Guardian, Giuliani agreed to meet with Bakalova, who told him she was a conservative news journalist. After the fake interview, they returned to a hotel suite that had concealed cameras, and Bakalova took off Giuliani’s microphone. At this point, Giuliani leaned back on the hotel bed and stuck his hand into his pants, The Guardian reported. But before anything else could happen, Cohen, dressed as Borat, ran into the hotel room and said, “She’s 15. She’s too old for you.” All of this is in the new mockumentary.

Cohen’s movie will be available on Friday, October 23, via Amazon Prime. On Wednesday afternoon, Giuliani tweeted a statement about the controversy.

“The Borat video is a complete fabrication,” he wrote. “I was tucking in my shirt after taking off the recording equipment. At no time before, during, or after the interview was I ever inappropriate. If Sacha Baron Cohen implies otherwise he is a stone-cold liar.”

Bakalova Is 24 Years Old, According to Her IMDb Profile

Bakalova is a young actress, but nowhere near as young as the character she portrays in the new Borat film. According to IMDb, she was born in June 1996, which would make her 24 years old today. 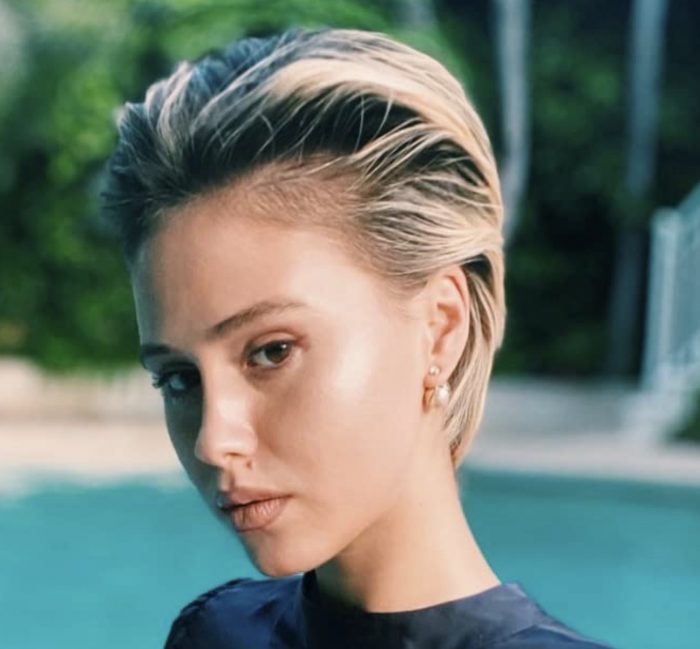 Bakalova has appeared in several television shows, as well as a few movies and shorts. She appears to be represented by AS ART Production House, a production agency.

The trailer for the Borat film doesn’t provide any credits, but Slate reported that Amazon’s press release indicates the film is “starring Sacha Baron Cohen & Irina Nowak.” However, after finding that “Irina Nowak, as far as the world wide web is concerned, basically doesn’t exist,” according to Slate, internet sleuths noted a resemblance between the actress in Cohen’s film and Bulgarian actress Bakalova. As of October 21, Bakalova’s IMDb profile confirms her role in the mockumentary.

Maria Bakalova is 24. Have you not heard of IMDb?https://t.co/4F2N2rrpsf https://t.co/MLOFzCslfm

In the wake of the announcement about Giuliani’s compromising scene in the new Borat film, many conservative accounts and journalists have taken pains to point out Bakalova’s real age.

Daniel Chaitin with the Washington Examiner tweeted, “Here’s an answer nobody seems to have bothered to track down before publishing headlines like this: The actress who plays Borat’s daughter, Maria Bakalova, is 24 according to an IMBD page with her name on it.” The tweet was in reference to The Guardian’s headline, which is “Rudy Giuliani Faces Questions After Compromising Scene in New Borat Film.”

This is the actress from Borat 2 Rudy was feeling himself up to https://t.co/rmDzYoYzzB

Over the summer, Giuliani acknowledged that he had experienced a run-in with Cohen’s Borat character, but he didn’t reference any specifics regarding the experience. In a July 8 interview with Page Six, Giuliani said he agreed to an interview and that Cohen ran into the room in the middle of questioning.

“This guy comes running in, wearing a crazy, what I would say was a pink transgender outfit,” Giuliani told Page Six. “It was a pink bikini, with lace, underneath a translucent mesh top, it looked absurd. He had the beard, bare legs, and wasn’t what I would call distractingly attractive.”

Giuliani continued, “I only later realized it must have been Sacha Baron Cohen. I thought about all the people he previously fooled and I felt good about myself because he didn’t get me.”

The former New York City mayor also acknowledged an appreciation for the original Borat film. He said, “I am a fan of some of his movies, ‘Borat’ in particular, because I’ve been to Kazakhstan. [Adopting a Borat accent, Guiliani repeats a famous line from the movie:] ‘She is my sister. She is number four prostitute in all of Kazakhstan.’ That was pretty funny.”

READ NEXT: 50 Cent Endorses Trump for President on Twitter