The unconventional couple kept separate residences and split up for good after the movie director began a relationship with Farrow’s adopted daughter Soon-Yi Previn, according to ABC News.

While Farrow is a mother of 14, most of her children were not conceived with or adopted by her with Allen.

Here’s how many children Mia Farrow shares with Woody Allen: 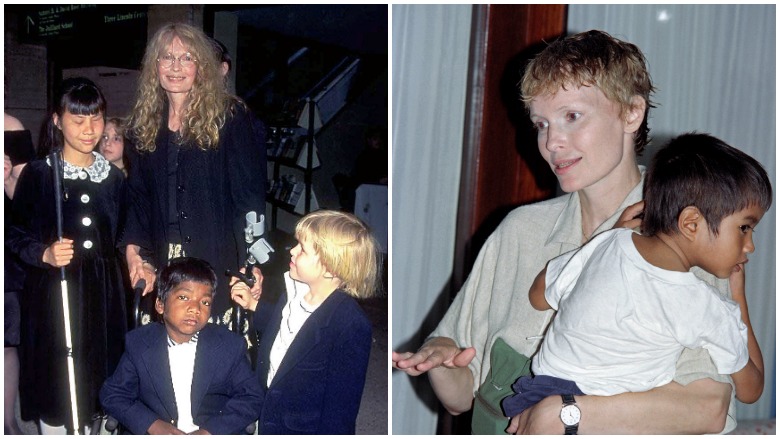 GettyMia Farrow with her kids.

Farrow already had several children by the time she began her relationship with Allen in 1980, including Soon-Yi, whom she adopted with her ex-husband Andre Previn, per The Nation.

In 1987, Farrow became pregnant with Satchel Ronan,  who was said to be the biological son of Allen. In 1991, Allen formally adopted Moses and Dylan Farrow, per Rolling Stone.

There Has Long Been Speculation That Ronan Is Not Actually Allen’s Biological Son, While Dylan Has Claimed That Allen Abused Her As a Child

In a surprising revelation several years ago, Mia Farrow hinted that her ex-husband Frank Sinatra could be Ronan’s father. While the celebrity couple divorced in 1968, Farrow later told  Vanity Fair that they “never really split up.”

When asked if Sinatra could be Ronan’s biological father instead of Allen, Farrow replied, “possibly.”

Ronan does not have a relationship with Allen today, nor does Dylan Farrow.

In a scathing 2014 open letter for The New York Times, Dylan accused her adoptive father of sexually molesting her when she was a little girl.

Allen has repeatedly denied the allegations by his estranged daughter, and only one of his children – Moses-  has stood by him.

In 2014, Moses Farrow told People magazine that Allen “did not” molest his sister. Instead, Moses blamed Farrow for drumming into him to “hate” his father for “tearing apart the family and sexually molesting” Dylan.

“I see now that this was a vengeful way to pay him back for falling in love with Soon-Yi,” Moses, a family therapist, added.

He also revealed that distancing himself from his mother “has led to a positive reunion” with his father, Allen. In 2020, Moses even told The Guardian, “I’d be happy to take my father’s surname.”

In addition to his three kids with Farrow, Allen adopted two daughters With Soon-Yi, Bechet and Manzie, according to Vulture.

Mia Farrow had 14 children in total, but three have died. Of her 11 living children, four are biological and seven are adopted, per People.

Farrow’s eldest children are her biological twin sons Matthew and Sascha Previn, whom she welcomed with her first husband Andre in 1970.

Farrow and Previn welcomed their third biological son, Fletcher, in 1974.  In 1976, the couple adopted Summer “Daisy” Previn, two years before adopting Soon-Yi. Isaiah Farrow was adopted by a single Farrow in 1992 and her daughter Quincy was adopted in 1994.

Farrow adopted her youngest child, daughter Frankie-Minh, from Vietnam, in 1995.

Sadly, Mia’s adopted children, Lark, Tam, and Thaddeus, have all passed away. the latter two by suicide, according to a post on Moses Farrow’s blog.