Chris “CT” Tamburello and his friendship with partner Tula “Big T” Fazakerley was a big storyline during last season’s “The Challenge: Double Agents” but it’s seemed to viewers as though CT has been less than supportive this season, telling Big T in the latest episode in no uncertain terms that he didn’t want her on his team.

Big T had spoken before about her feelings on CT’s confessionals this season but in a recent appearance on “MTV’s Official Challenge Podcast,” she actually revealed that CT told her going into “Spies, Lies and Allies” that he felt really bad about what happened on “Double Agents” and he wanted to do a big gesture during season 37 to support her.

She said watching the most recent episode, she felt as though her fears were confirmed. “I really feel like the whole ‘hawk and bunny’ friendship, from my side of things it was genuine but from CT’s side, I do think it was a storyline. Strategy,” she told Aneesa Ferreira and Tori Deal. Big T explained that she feels as though CT is a completely different person during the first half of the season compared to the mid-to-end of the season.

Aneesa said what was confusing in the past episode was everything CT had to say about his former partner Big T and not wanting her on his team. In the past, CT spoke about how Big T “really helped” him on “Double Agents.” Big T replied to Aneesa, “You know people say, don’t take things personally it’s a game, I absolutely understand that, I have the emotional intelligence to understand that.”

However, Big T explained that before filming started, when everyone was in quarantine, CT called her and told her, “Big T, I’m so sorry how our friendship played out last season in Iceland,” she quoted to Tori and Aneesa. She said he told her, “I feel really, really bad,” and continued:

You know I want to find an opportunity where I can make things up to you and I’ve been thinking about situations and scenarios in my head and I’ve just imagined this moment where you’re in trouble and you have to go down into elimination and I come in and I save you and I take your space anyway, you know I wanna fall on the sword for you.

“Those were direct quotes, CT’s words,” Big T told the co-hosts. “I said to him, this is very dramatic but I actually got quite teary hearing that cause it’s like wow this is somebody who really, really wants to make amends and wants to give me an opportunity and they truly believe in me.” 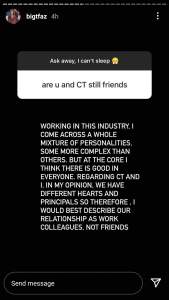 Before her appearance on the podcast, Big T addressed CT’s confessionals during an Instagram Q&A where she said, “I look for consistency in my friendships/interactions with people. Without consistency people can get upset because they don’t know where they stand. I don’t believe there is any need to act like someone’s biggest cheerleader when in actuality, [you’re] not.”

In another Q&A, Big T was asked if she and CT are “still friends” and her reply was very telling. She wrote, “Working in this industry, I come across a whole mixture of personalities, some more complex than others. But at the core I think there is good in everyone. Regarding CT and I, in my opinion, we have different hearts and principals so therefore, I would best describe our relationship as work colleagues, not friends.”

Loading more stories
wpDiscuz
0
0
Would love your thoughts, please comment.x
()
x
| Reply
One star of 'The Challenge' said CT Tamburello called her before the season and told her he wanted to 'fall on his sword' for her.