There was one less person living in the loft when the inaugural cast of MTV’s The Real World reunited for the upcoming Paramount+ revival, The Real World Homecoming: New York.

In a profile piece by The New York Times, it was revealed that cast member Eric Nies — the male model who went on to enjoy a long MTV career as the host of The Grind and an early season of The Challenge and was the winner of Real World/Road Rules Challenge: All-Stars and Battle of the Sexes 2 — didn’t make it into the original SoHo loft with fellow Real World cast members Becky Blasband, Andre Comeau, Heather B. Gardner, Julie Gentry, Norman Korpi, and Kevin Powell.

Instead, Nies communicated with his castmates via video from a New York hotel room – not by his choice.

“I’m not sure how much I can get into that right now,” Nies told the Times of his absence from The Real World loft. The 49-year-old added that his remote appearance on the show was “definitely not by my choice, but I accepted the outcome — more will be revealed in the future.”

On the premiere of the MTV revival, which was filmed in January, Nies didn’t show up at the SoHo loft as the group reunited for their first dinner together in nearly 30 years. The former The Grind host then appeared on a video screen to deliver bad news to his co-stars.

“Guess what I have?” he said to the group, per Us Weekly, before revealing he was diagnosed with COVID-19 after routine testing before the cast’s move-in date.

Nies assured his former roommates that he was feeling “okay.”

Nies then began to cry with his Real World, castmates as they found out he wouldn’t be able to film with him for a complete in-person reunion.

“I’m in a hotel somewhere downtown,” he said. “I love you guys! You all look so beautiful.”

On social media, fans were initially confused by news of the absence of Nies and wanted to know why he wasn’t in the loft with the rest of the cast. Many speculated that it could be due to coronavirus testing just ahead of filming for the reality TV reunion after it was teased that Nies made it to his first pitstop at a New York City hotel room but was stopped from moving into the Real World house at the last minute.

“I have no tea on this, but it’s likely it was a run-of-the-mill positive Covid test right before taping,” one Real World fan wrote on Twitter.

“The Real World Homecoming hasn’t premiered and there’s already drama!” tweeted blogger Perez Hilton. “Eric Nies said he was sequestered in a hotel room and could only participate via video chat. I’m guessing he had COVID? He didn’t elaborate. They couldn’t postpone by a month for him?”

But others weren’t so sure Nies’ remote reunion was COVID-related.

“I don’t think so based on the quotes in NYT article,” another fan speculated. “Sounds like some type of drama.“

Because Nies said his absence wasn’t by his “choice,” fans knew his separation from the cast had nothing to do with him not wanting to have roommates, which was the case for his co-star Heather B. Gardner. The rapper eventually did move into the loft, but only after some convincing.

“I was the last one to sign on,” Gardner told Us Weekly. “I needed the most convincing only because it’s, like, this thing where you feel like you put something really good together and you don’t want to mess it up . … We’re all grown! We all live in our own separate situations. I’m like, ‘I don’t want no roommates. But I’m glad. I’m so glad that I went back.” 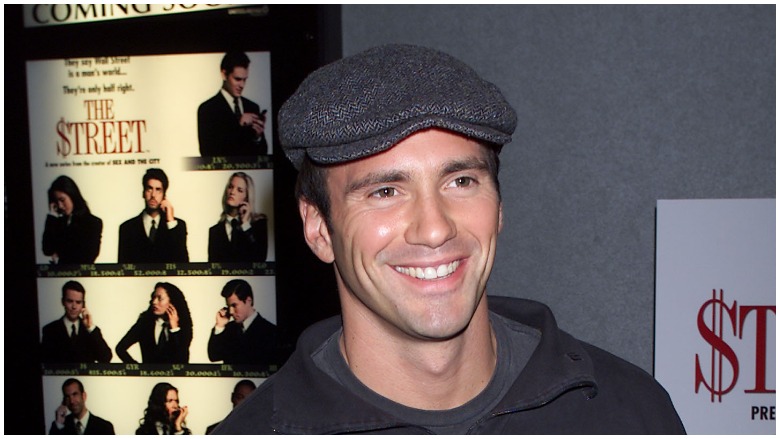 Nies did recently reunite in person with his castmates for a separate TV special for E! hosted by Andy Cohen. In an interview for For Real: The Story of Reality TV, Nies revealed that the original Real World saved his life when it debuted in 1992.

“If the Real World didn’t happen and my life didn’t go the way it did, I might have been dead,” he told Cohen.

Nies explained that he was on a “self-destructive path” when MTV came calling nearly 30 years ago.

“There were a lot of wounds that I was suppressing from my childhood,” he said. “I started using drugs at a young age.”

The former model said that after The Real World he was able to look at himself and see the things that he wanted to change.

Nies added that he never did drugs while living in the original Real World house.

Loading more stories
The original 'Real World' star was not allowed to film the revival in person with the other six cast members.