Nany Gonzalez appears to be planning the next big stage of her life and her future with her partner Kaycee Clark as she opened up on social media about their relationship and the longtime “Challenge” veteran hinted that she may be ready to start a family sometime soon.

The “Real World: Las Vegas” star, 32, first wrote on Instagram, “I’m so excited for our future together” alongside a picture of herself and Kaycee, 33, together.

She then asked her followers for recommendations or advice regarding in vitro fertilization (IVF) treatments, a method of assisted reproduction where eggs and sperm are combined in a laboratory glass, after which fertilized eggs can be transferred in a woman’s uterus. 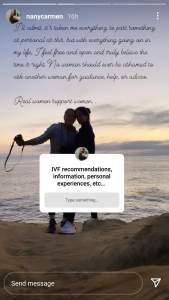 In her second message shared to Instagram, Nany said, “I’ll admit, it’s taken me everything to post something as personal as this, but with everything going on in my life, I feel free and open and truly believe the time is right. No woman should ever be ashamed to ask another woman for guidance, help or advice. Real women support women.”

Nany used as the background for that Story a photo of herself and Kaycee together and then asked her followers for “[IVF] recommendations, information, personal experiences, etc.” The next morning, Nany added, “Sooooo overwhelmed with the amount of responses to my post last night… I don’t even know where to begin, so much information, so much help, so much love!! Thank you all.”

Nany and Kaycee began dating sometime around when “Spies, Lies and Allies” filmed and began posting photos and videos together in the summer of 2021. In the first few episodes of the 37th season, fans saw the two already looking loved up together, including Kaycee planning an elaborate and romantic date with Nany.

On October 29, 2021, Nany revealed that her mother had just died, writing on Facebook, “Heaven has received an angel. May you Rest In Peace, Mom. I will continue to make you proud & not a day will go by where I don’t think of you and thank you for the life you gave me. The strongest woman I know, my mother. Carmen Guerra-Ferry.”

She did not share more about her mother’s cause of death but in the days that followed, Nany posted several videos and photos of herself going through photos of her mother and her family and telling her followers to hug their loved ones.

In response to Nany posting about her mother’s death, Kaycee commented, “I am so grateful that I was able to meet her such a kind, strong and beautiful soul she was sooo proud of you and loved you so much baby. You are literally your mothers daughter R.I.P OG Carmen.” Kaycee remained by Nany’s side during this difficult time, Instagram photos showed, and Tori Deal wrote, “I’m so Happy Kaycee is there to be with you right now and always.”

Discover more from Heavy on The Challenge↓

Unlock the latest Challenge news, rumors and exclusives — direct to your inbox. ↓

More Heavy on The Challenge News

Loading more stories
wpDiscuz
0
0
Would love your thoughts, please comment.x
()
x
| Reply
'The Challenge' star Nany Gonzalez has revealed some major plans for her future and commented on her relationship with Kaycee Clark.