Oprah Winfrey is one of the most successful women in the entertainment industry — and one of the wealthiest. According to Forbes, Winfrey has an estimated net worth of $2.7 billion.

Winfrey has often been called the richest African-American of the 20th century, according to her IMDb page, but she didn’t grow up in a wealthy home. In fact, Winfrey’s family struggled economically through her entire childhood. She lived a life that was filled with challenges, as she moved back and forth between Milwaukee with her mom and Nashville with her dad. She is a victim of sexual abuse and has spoken out about being raped. At age 13, Winfrey gave birth to a child — a baby boy who died just after he was born.

Winfrey received a scholarship to Tennessee State University. She majored in Speech Communications and Performing Arts, which helped prepare her for her career.

Like many, you first met Winfrey in 1986 when she landed her very own talkshow. From there, Winfrey has acted, produced, advertised, and authored, becoming a serious powerhouse in the media world. In 2003, Forbes announced that Winfrey was the first black woman to ever become a billionaire.

1. Her Production Company, Harpo, Earned Between $7 & $9 Million for Her Interview With Meghan Markle & Prince Harry

In 2021, Winfrey landed one of the biggest interviews of her career. She sat down with Meghan Markle and Prince Harry — both of whom she considers friends — for the couple’s first nationally televised interview since leaving the royal family and moving from the UK to the U.S. The highly anticipated interview will provide viewers with a look at life from Markle’s eyes after a highly criticized couple of years living under the monarchy.

According to the Wall Street Journal, CBS paid a licensing fee of between $7 and $9 million for the rights to air the interview. The report indicates that CBS beat out competing networks ABC and NBC for those rights. And while Harpo Productions cashed in on the interview, it was noted that Markle and her husband did not make any money off of it.

On CBS This Morning, Winfrey’s longtime friend Gayle King shared that Oprah said it was the “best interview” she’s ever done. Of course, Winfrey has done many interviews over the course of her career, but this is one of the most lucrative, at least in recent years.

Winfrey’s interview with Markle and Prince Harry will air on Sunday, March 7, 2021, at 8 p.m. Eastern on CBS.

2. She Has Worked as an Actress, Has Her ‘Own’ Network, & Has Made Millions as a Daytime Television Host

Before Winfrey became a household name, she started small. In fact, she had to be convinced to take a job at CBS in Nashville while she was still in college. A short while later, Winfrey took a job in Maryland, co-anchoring WJZ’s 6 p.m. weekday newscast with Jerry Turner, for a salary of $22,000. The job didn’t suit her talents, however, and she ended up being fired.

Her boss saw something in her that he thought would be perfect for a different kind of work — talkshow work. He set her up with a gig on People Are Talking. It was 1978 when Winfrey found her passion. She stayed with the program for seven years before taking a leap of faith. Winfrey sent recorded tapes to a talkshow in Chicago and was offered a job. In September 1985, A.M. Chicago became The Oprah Winfrey Show. The following year, the show made its national broadcast. The show received several Day Time Emmy Awards over the years, making Winfrey the queen of daytime talk. Her show continued for 25 seasons, ending in May 2011. In that final year, Winfrey earned $290 million.

Throughout that time, Winfrey didn’t just hold one job. She also landed several roles in film. In 1985, she starred in The Color Purple, played a role that earned her a nomination for Best Supporting Actress at the Academy Awards. Over the next three decades, Winfrey has well over a dozen credits to her name. Some of her most well-known work includes roles in Beloved (1998), Lee Daniels’ The Butler (2013), and Selma (2014). In 2018, Winfrey returns to the big screen once more with a role in the highly anticipated film, A Wrinkle in Time.

Winfrey hasn’t just acted, either. She has also produced over three dozen credits ranging from films (like Beloved and Selma) to television movies (like Amy and Isabelle in 2001) and television series (like The Big Give in 2007).

Certainly that’s enough work to keep one woman busy for a lifetime, but Winfrey didn’t stop there. After ending her daytime talkshow, she decided to have her very own network. Winfrey is the chairman of OWN (Oprah Winfrey Network). She became the chief executive officer and chief creative officer in 2011, according to Deadline. Things were very slow at first, the network losing millions of dollars in the first couple of years before turning an incredible profit. OWN is now valued at $280 million.

In December 2017, “Discovery Communications paid $70 million to Oprah Winfrey’s Harpo, Inc. to acquire an additional 24.5% stake in the companies’ joint venture, OWN: Oprah Winfrey Network,” according to Deadline. Winfrey had not been earning a salary from OWN prior to this transaction.

“With the deal, Winfrey is cashing in on her involvement in OWN. According to Discovery, this is the first time Winfrey has received a payment from her company’s ownership stake in OWN in the 10 years since forming the joint venture with Discovery. Harpo will retain a ‘significant minority interest’ in OWN and Winfrey will continue in her role as CEO. Her exclusivity contract with OWN, including as on-air personality, has been extended through 2025.”

Winfrey has a great stream of money flowing from all of her projects — and she even earns money for stakes she has in television shows like Dr. Phil, Rachael Ray and The Dr. Oz Show.

3. She Earns Money from Her Magazine & Has Also Penned Several Books

Not long after she started hosting The Oprah Winfrey Show, Winfrey decided to start up her very own magazine. O: The Oprah Magazine‘s first issue was released in 2000. It is available for a yearly subscription ($15 for the year) for which a subscriber will receive the magazine once a month for 12 months.

In 2011, Adweek called the magazine “hugely profitable” despite a dip in subscriptions.

“The magazine remains a circulation and newsstand juggernaut. But single-copy sales have fallen 32 percent since 2006, to 595,835. That decline has been replaced by subscriptions, which have risen to 1.9 million from 1.5 million, but those subs aren’t as lucrative as they once were. An annual sub runs an average of just over $16, down from nearly $22 in 2006.”

Winfrey has also penned several books including What I Know For Sure which was released in 2014. Last year, Winfrey released a cookbook called Food, Health and Happiness: 115 ‘On Point’ Recipes for Great Meals and a Better Life.

4. She Earned $70 Million in 1 Day from Weight Watchers After Buying Stake in the Company

In October 2015, Winfrey revealed that she paid $42 million for a 10 percent stake in Weight Watchers, according to USA Today.

“Weight Watchers has given me the tools to begin to make the lasting shift that I and so many of us who are struggling with weight have longed for. I believe in the program so much I decided to invest in the company and partner in its evolution,” Winfrey said in a statement at the time.

According to Forbes, Winfrey’s announcement launched the weight loss brand forward, and the stock doubled in one day of trading. On Monday, October 19, 2015, Weight Watchers stock closed at $13.92 a share. This earned Winfrey a whopping $71.6 million in one single day.

In 2017, Winfrey saw another huge boost in income thanks to a surge in Weight Watchers stock. According to CNN Money, the company climbed 14% in May, increasing Winfrey’s stake to a whopping $154 million.

5. She Owns a Stunning Estate in Montecito, California, Worth $165 Million & Several Other Properties That She Can Travel to on Her Private Jet

The home’s backyard is perfectly manicured. It features a garden filled with flourishing roses, lilies, daffodils, dahlias, and irises, to name a few. There are breathtaking views of the Pacific Ocean and the Santa Ynez Mountains, and a tea house that Winfrey uses as a quiet space to read and relax.

In December 2015, Winfrey dropped some serious cash on an impressive 23-acre property in Montecito, California. She spent over $28 million on the equestrian estate known as Seamair Farm. The property abuts 40 acres of land that Winfrey had already owned.

The legendary talkshow host also has property in Hawaii, according to Bisnow.

“Supposedly the former talk-show queen owns quite a bit of real estate in Hawaii; most evident is her farm in Maui. Here resides a farmhouse that Oprah stripped and renovated to include a high ceiling master bedroom, all French doors and a veranda wrapped around the entire house. Additional features include 16 acres of farmland, on which 100 variations of fruit, veggies and herbs are grown, and hens are supplying eggs,” the site reports.

She owns a place on Paradise Island in the Bahamas, where she can go for a quick getaway.

Winfrey can travel to her homes using her very own Bombadier Global Express XRS, a private jet that she purchased in 2016. 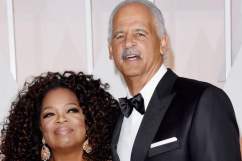