Candace Bushnell knows her away around New York City, but does she have what it takes to be a Big Apple-based Real Housewife?

The “Sex and the City” author, 63, has been the subject of rumors that she’s set to join “The Real Housewives of New York City.” The latest tea came from a Deumoix blind item (shared via Bravo Afterthoughts), which teased that there will be “2-3 newbies” on the upcoming season of the Bravo reality show, and one of them is Bushnell.

“Since ‘Sex and the City’ is so big right now the plan is to lean into that by finally bringing Candace Bushnell on board,” the tip read.

Fans may recall that Bushnell made a cameo on the 9th season of RHONY, when pal Dorinda Medley famously told her she was doing “not well, b****,”  according to BravoTV.com.  She is also neighbors with Luann de Lesseps, and has been known to hang out with Ramona Singer.

But is the writer up for a full-time role on the long-running reality show?

During a  January 2022 guest spot on the “Behind the Velvet Rope” podcast, Bushnell told host David Yontef she doesn’t see herself making the jump to a full-time Housewife—or even a  recurring “friend of.”

“I mean, it looks like such a fun thing to do, doesn’t it?” she said of the Bravo show. “You go on a trip, of course you have to ride around in those damn buses all the time. Like, OK, it’s a glamorous bus, but it’s still a frickin bus, but you know, you go on private planes and you go on vacations, you stay in places.”

She revealed that she was already scolded once by RHONY producers.

“First of all, when I went to Ramona [Singer’s] house, I got into trouble,” she explained. “I got yelled at by the producers because they said I was breaking the fourth wall. It’s like, OK, I didn’t know there was a fourth wall in TV, but OK, we’re good. But you, you know, there are tons and tons of producers.”

She also noted that on a reality show “you can’t do whatever you want to do.”

“Plus I really don’t like yelling at people or conflict,” she continued. “That I can’t do. And you know, I know Ramona. I’ve known Ramona since the eighties and I’ve known Sonja [Morgan] since the nineties. So you know, I don’t want to be getting into fights with Ramona. I’m just not going to do that.” 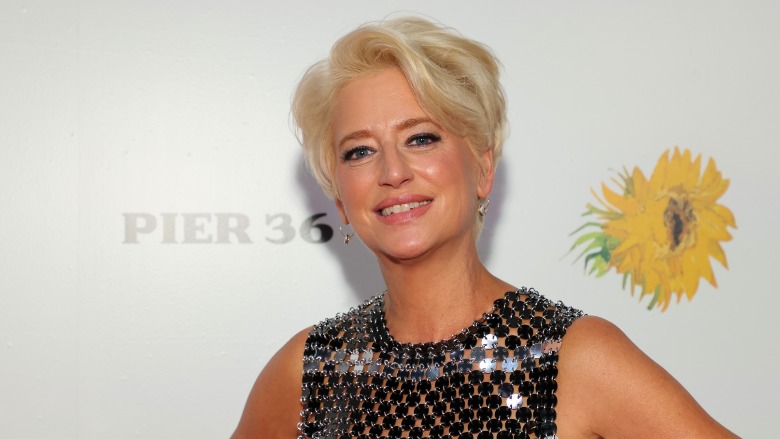 While she doesn’t want to be on the show with her friends, one of them may have inspired a character that was featured on the HBO series “Sex and the City” and its new spinoff, “And Just like That.”

According to Marie Claire, the character of Carrie Bradshaw’s snarky friend Susan Sharon (played by Molly Price) is thought to be based on RHONY star Dorinda Medley. The rumors were fueled after Medley and Bushnell’s dinner party was shown on RHONY, and by the fact that Susan Sharon’s husband and Medley’s late husband were both named Richard.