Jen Shah claims her co-stars are telling tales – and one of them in particular.

On the latest episode of  “The Real Housewives of Salt Lake City,” viewers watched what took place in the hours following  Shah’s arrest by federal agents in March 2021.

The “real time” episode was filmed as the Salt Lake City group was headed out on a cast trip to Vail, Colorado, but the missing Shah was the main topic of conversation.

Shah and her assistant, Stuart Smith, were charged with conspiracy to commit wire fraud and money laundering in a nationwide telemarketing scam, CNN reported. Shah, who pleaded not guilty, is scheduled for a trial in March 2022,  according to Us Weekly.

While some of Shah’s co-stars were shocked when federal agents and the NYPD swarmed their travel bus, one was not. Meredith Marks, who was already at the Vail vacation home when the drama went down in Salt Lake City, admitted she was “not surprised” to hear about Shah’s shady dealings.

During the episode, she later recounted a story to co-stars Heather Gay, Lisa Barlow, Mary Cosby, and Jennie Nguyen after they gathered for dinner in Vail. Marks alleged that Shah was once involved in a theft incident at the accessories boutique she owns in Park City, Utah.

Marks claimed that last fall, when she was in New York with her family, she noticed she had several missed calls from Shah. She later found out Shah and members of her team were trying to get into her store after hours.

“I was at dinner and I called her back and she’s like, ‘Oh, we’re good. I was trying to get into your store. It was closed. I was banging on the door, but your manager reopened for me,’” Marks said of Shah in the episode,  per Page Six.

Marks said she later asked her store’s manager what Shah bought and was told that her RHOSLC co-star paid for several hundred dollars in items, but that a snakeskin bag was missing from the shop after the group left.

“[My manager told me], ‘There is a green clutch that I know was here. Her friends were holding it and it is gone,” Marks told her co-stars. “So, I said to my manager, ‘Send her a text and just gently say, ‘Did you borrow it?’ And within 30 seconds, my manager’s phone is ringing.”

Marks said her manager was told the bag would be returned the next day. Security video from the store was also shown during the episode.

In a confessional, Marks reiterated that it was not Shah who stole the purse, but one of her associates.

“Jen did not walk out with a bag,” Marks said. “But what really didn’t sit well with me is she kept someone who she knew did take something out of my store in her employment. That’s not my friend.”

Marks also noted that she heard that Shah is “red-flagged” in Louis Vuitton’s system for paying in cash when she shops at the high-end retailer. She did admit that the retail red flagging was “gossip” and she had “no clue” if it’s true. 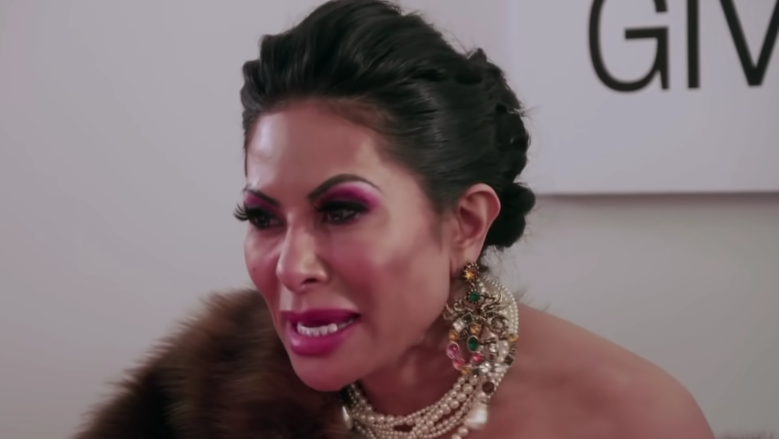 Shah hit social media as the episode aired to clap back at her co-stars who gossiped about her on camera. When one viewer wrote that the group was doing her dirty and telling all her “business,” Shah replied, “They not telling my business…only lies.”

When another viewer claimed “they” had Shah on tape “walking out” with the snakeskin clutch, she replied, “No they didn’t. That’s not accurate AT ALL WHATSOEVER.”

“What is on camera??” Shah also tweeted. “Is this like when my vagina was supposedly on camera (but it never was)? Asking for a friend.”

Shah was referring to the RHOSLC scene in which Marks’ son, Brooks, accused her of flashing him and saying that it made him uncomfortable.

In a video posted on Twitter, Shah claimed Marks lied about the story.

“Also…just to put this fake news story to bed. This happened Sept. 13. 2020, on our way to brunch….5 months later, we filmed the reunion. This NEVER came up at the reunion because it never happened! But she wants to bring it up 14 months later,” Shah added on Twitter.

Shah also had a final message for Marks after seeing her talk about her during the cast trip.

Loading more stories
wpDiscuz
0
0
Would love your thoughts, please comment.x
()
x
| Reply
The 'Real Housewives of Salt Lake City' star fired back as the episode about her arrest aired.