Things are not hunky dory between Kathy Hilton and “The Real Housewives of Beverly Hills.”

The “friend of” the Housewives became a fan favorite last season, but she is now refusing to film for the show unless she gets more money, TMZ reports. An insider told the outlet that production for the 12th season of the Beverly Hills-based reality show has been going on for weeks without Kathy and that she has yet to sign the contract she was given by Bravo – and that she won’t sign it unless she’s offered a higher salary.

TMZ noted that Kyle Richards claimed her big sister Kathy was missing from filming sessions because she was too busy getting ready for her daughter Paris Hilton’s recent wedding, but the show source maintained it’s all about the paycheck.

It’s unclear how much Kathy was paid for her debut season on RHOBH. According to Us Weekly, longtime full-time RHOBH star Erika Jayne earned $600,000 for season 11.

Kathy also didn’t show up for the group’s first official season 12  filming event at the Andaz Hotel in West Hollywood. In a series of photos shared by the Real Housewives Franchise and Queens of Bravo Instagram accounts,  Kyle Richards, Lisa Rinna, Garcelle Beauvais, and Erika Jayne, gathered for a dinner party that was filmed by Bravo. Even Dorit Kemsley turned up to film RHOBH scenes, just a day after she was robbed at gunpoint at her Encino mansion, according to the Daily Mail.

Kathy also did not attend her niece Portia Umansky’s bat mitzvah in October, according to Page Six, which prompted some to wonder if she was feuding with her sister Kyle. Bravo’s cameras were seen at the bat mitzvah even though Kathy wasn’t.

Just ahead of her daughter’s three-day wedding extravaganza, Kathy addressed questions about her RHOBH future.

“You know, I don’t know what I’m doing tomorrow,” she told Entertainment Tonight. “I could be skiing off Mount Everest. I don’t [know] right now.”

Kathy Previously Said She Would Like to Return to RHOBH 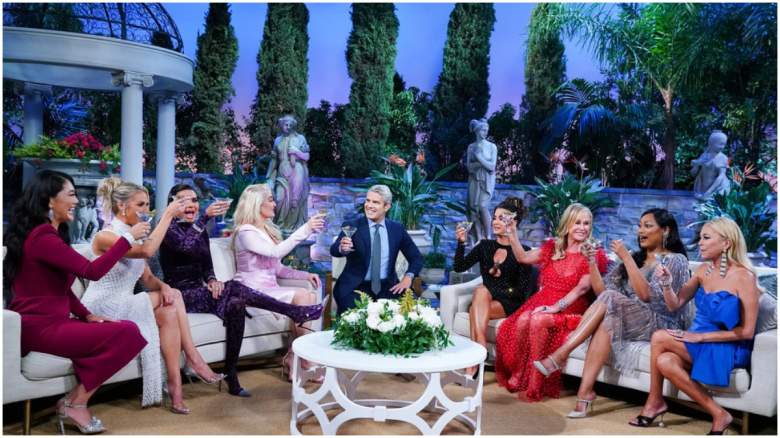 In the past, Kathy has said that she would like to return to “The Real Housewives of Beverly Hills.”  In October 2021 she told Extra she was waiting to be asked back to the show.

“I have had a great time,” she said. “First you have to see if you are invited back, but I’ve had a wonderful time… I love the girls.”

Kathy did admit that filming the intense, four-part  RHOBH reunion left her feeling “so wiped out.”

In June 2021, Kathy told Entertainment Tonight that being on the hit show felt like she was in a “girls’ club.”

“I feel like I’m a member of a very special group of dynamic women — that have their drama — and I love to be in the middle of it,” she told ET.

But Kathy also noted that she never wants to be a full-time cast member on the long-running reality show that her sister Kyle has starred in since 2010.

“I will never hold a diamond, ever, that I can tell you,” she said. “I have a lot on my plate right now and working on some interesting, exciting things. I wouldn’t have time.”

Keep Kathy. Get rid of Dorit. Give Kathy her money. She brings nothing to the show. All Dorit does is brag and talk over people. I love Kathy and her sense of humor. She made watching the show worth while.

Loading more stories
wpDiscuz
1
0
Would love your thoughts, please comment.x
()
x
| Reply
The RHOBH 'friend' has not filmed with the cast for season 12.