Kim Richards may not be telling all after all.  The former Real Housewives of Beverly Hills star hit a major snag with her book deal with publisher Harper Collins, a source told The Daily Mail. After a series of changed release dates, the long-awaited memoir, titled The Whole Truth: The Reality of It All, has now been scrapped by the publisher altogether.

“’They killed it,” the source told the outlet. “’And they’re letting Kim keep the $300,000 book advance. [Harper Collins] said they didn’t think they would ‘be able’ to recoup the money so they’re taking it as a loss.”

Richards’ tell-all book has been riddled with problems and controversy since the get-go. It was originally supposed to be published by Harper Collin’s Dey Street Books division in April 2020, but the release date got pushed out to August of that year and then to February of 2021. The latest update had it scheduled for an October 15 2021 release.

The insider said it’s not a  shock that the former child star’s book is now being scrapped altogether given the past drama with her manuscript.

“This book was cursed from the beginning, with a lawsuit and delay after delay,” the Daily Mail insider explained. “No one should be surprised it was finally given the ax.”

In 2019, Richards was sued by her ghostwriter, Allison Kinsgley Baker, for thousands of dollars in unpaid services and was ordered by a judge to pay up, per Radar Online. A source at the court hearing told the outlet that Richards “began unraveling” when called up to testify, giving “excuse after excuse as to why she hadn’t paid her ghostwriter” despite receiving a $300,000 advance from her publisher earlier that year. She settled with the writer for $5,000.

The Radar insider predicted Richards would be sued by the publisher if she “didn’t produce a book,” given she received a hefty advance for the project.

Richards started out as a 1970s child star and Disney darling, but her more recent stint as a Bravo Real Housewives star gave fans a look at her secret battle with alcoholism and prescription drugs. She also grew up with famous sisters Kathy Hilton and Kyle Richards, who are still part of the Bravo-verse.

The 56-year-old star, whose life has also included divorce, tragic deaths, and family drama, told Page Six it was not easy for her to relive her painful past while writing her book.

“Looking back at my life, every bit of it from the beginning, was very, wow,” Richards said. “Some of the … painful parts were tough. It’s been beautiful, too. I’ve grown a lot.”

According to People, the press release for The Whole Truth described Richards’ book as “the soul-baring confession of a woman revealing what it was like to be treated like a show pony as a child star, as a disposable object as a wife, a whipping post as a sister, and as a tabloid commodity as a celebrity.”

The book was supposed to feature around 30 photos from Richards’ life as she took her  “unvarnished, painful, and authentic” story. 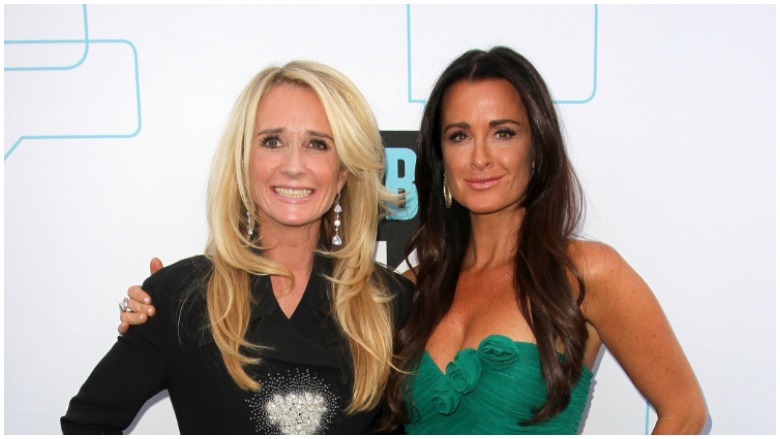 While the Richards sisters are now close, Kyle Richards admitted to People she was surprised to find out that Kim was writing a memoir after seeing the press release that described her as a ‘whipping post” when it came to her sisters.

“I didn’t really know about the book,” the RHOBH veteran said last year. “I mean, she started saying she was working on, you know, something and I didn’t really — I don’t really know a lot about it. All I know is we’re in a good place, so hopefully, we’re going to stay there. …Let’s hope we stay at that! Let’s hope it just stays there. That’s all I keep saying.”

She revealed that the description of the book took her and sister Kathy Hilton “aback” and that she would “have to read it.” Kyle also admitted she was “very curious” about Kim’s book.

Kyle Richards knows firsthand how a personal project can come between the famous sisters., After she produced American Woman, a TV series based loosely on the sisters’ childhood growing up with their single mom in the 1970s, Kyle was nearly uninvited to her niece’s wedding, a source told E! News.

“Kyle was initially uninvited to Nicky [Hilton’s] wedding because of Kathy,” a source said. “There was a lot of tension over the TV pilot Kyle has in development that’s based on her life growing up with her sisters.”