Kyle Richards got real about her marriage to Mauricio Umansky on “The Real Housewives Ultimate Girls Trip.”

In “Days of Our Wives,” the second episode of the Peacock spinoff. Kyle chatted with “Real Housewives of Atlanta” alum Cynthia Bailey about her long union.

As the Housewives spent the day on a catamaran, Cynthia pulled Kyle aside to quiz her on how to have a successful marriage. The RHOA star started off by saying she knows Kyle has been with Mauricio for 25 years and she asked her for advice on her marriage to Mike Hill, whom she had married just six months prior.

Cynthia noted that she wants her marriage to work, but that things are so different today with “hoes sliding in people’s DMs.”

Kyle revealed that she deals with similar DM drama with Mauricio.

“Trust me, the same thing,” the “Real Housewives of Beverly Hills” star said. “And it’s funny because my husband doesn’t know how to work Instagram.  So he didn’t even know that existed. He says, ‘Can you post this? I don’t know how to do it.’ And I look at the DMs and I’m like ‘Are you f***ng kidding me?’”

“And meanwhile I’m getting mad at him and he doesn’t even know they’re there,” she continued. “I get so protective because I love him so much and I never knew I could have a relationship like this. My parents were divorced. It’s the most important thing in the world to me.”

She added that while sometimes her husband annoys her and she and she wants to “strangle” him, she knows she would never want to be married to anyone else.

Kyle added that her biggest advice to Cynthia is to “surround yourself with other happily married couples” and not the friend who cheats on his wife.

“Our common goal is to grow old together,” she added of her and Mauricio.

Both Couples Have Dealt With Cheating Rumors 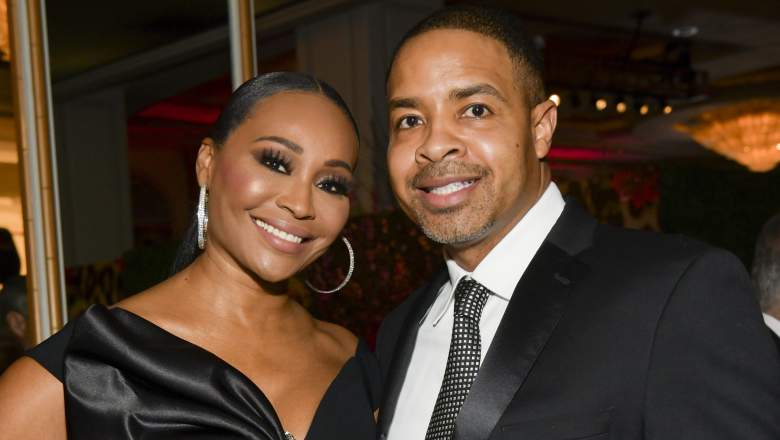 GettyCynthia Bailey and Mike Hill in 2020

In early November 2021, just one year after he married the RHOA star,  Hill told TMZ that allegations that he sent a nude picture of himself to another woman were “not true.” He also threatened legal action against the Snapchat accuser.

And longtime RHOBH fans may recall that Kyle and Mauricio weathered a similar storm in season 4 of the Bravo reality show after some of her co-stars spread rumors that the realtor was unfaithful. Then co-star Brandi Glanville also pulled out tabloid stories about Mauricio while the group was on a cast trip.

In a statement posted by Radar Online, Mauricio denied the allegations.

“I am faithfully and happily committed to my wife of 18 years, Kyle Richards, and our children, and am saddened to learn that someone would spread these ugly and vicious false rumors regarding me.” he said at the time.

Kyle & Mauricio’s Marriage Recently Made the Cover of  a Magazine

In honor of The Knot’s  25th anniversary, Kyle and Mauricio’s 25-year marriage was profiled. The Bravo couple posed for the cover of the magazine and reflected on their marriage.

“ I think it’s important to know that you are going to be challenged and you have to start out remembering that you are in this for better or for worse,” Kyle said when asked for marital advice. “There are going to be bad days, but hopefully the good outweighs the bad. We’ve, of course, had challenging times, but never ever a moment where we weren’t on the same page. We love each other more than anything, and we’re in this until the day we die.”

In a separate interview with E! News, Kyle maintained her stance on hanging out with other strong couples.

“Solid couples that are happy and a positive influence,” Kyle reiterated. “That energy is contagious, so I think that’s a really important thing. And to respect each other as individuals. And to allow each other to grow as people but also to not grow apart.”