“The Real Housewives of Beverly Hills” star revealed that she has launched a new business venture – and that it’s in a city that’s dear to her heart.

In a video shared with fans, Kyle was seen outdoors at a shopping center with a camera crew behind her. The Bravo star asked fans if they knew where she was, then she revealed that she was in Palm Desert, California. Kyle owns a home in Palm Desert, and her husband, Mauricio Umansky, also has an office for his real estate brokerage company, The Agency, in the city.

Kyle Shared News About Her New Store In an Instagram Live

In an Instagram Live, Kyle told fans that she is opening a new store in Palm Desert, and she hinted that some famous friends were with her for the grand opening.

“I’m really excited to share with you, and that may or may not be a camera crew behind me,“ Kyle said. “What’s happening tonight…I’m opening a  store. I  have a store again! We are doing an opening tonight with some friends of mine—some you may know.”

When one fan noted the camera crew and asked Kyle if she was filming her opening event for “The Housewives of Beverly Hills,” she coyly responded, “Hmmm… I don’t know.”

The “Real Housewives of Beverly Hills”  is currently filming its 12th season, so it’s no surprise that  Kyle’s store opening did appear to be a filming event. Footage of co-stars Lisa Rinna, Garcelle Beauvais, and Sutton Stracke at the store made the rounds on social media, as can be seen below. The cast previously reunited for their first season 12  filming event at the Andaz hotel in West Hollywood last week, according to the Daily Mail.

In her announcement video, Kyle revealed that her new shop will be located in a shopping center right between the high-end stores Louis Vuitton and Bottega Veneta and across the street from Saks and her husband’s firm,  The Agency, and that the new store will house the Kyle + Shahida fashion line that she created with designer Shahida Clayton.

The  Kyle + Shahida store is located in the Gardens on Paseo shopping center in Palm Desert. According to the Gardens on Paseo website, the store will feature Kyle’s “luxury resort and loungewear brand.” The description for the brand teased that the clothing is made with “one of a kind matchless, high-tech natural materials, with unique and precious touch and feel. “

In her video, Kyle revealed that while she will start out just selling the Kyle + Shahida line at her Palm Desert boutique, she plans to add other brands to her inventory in the future. 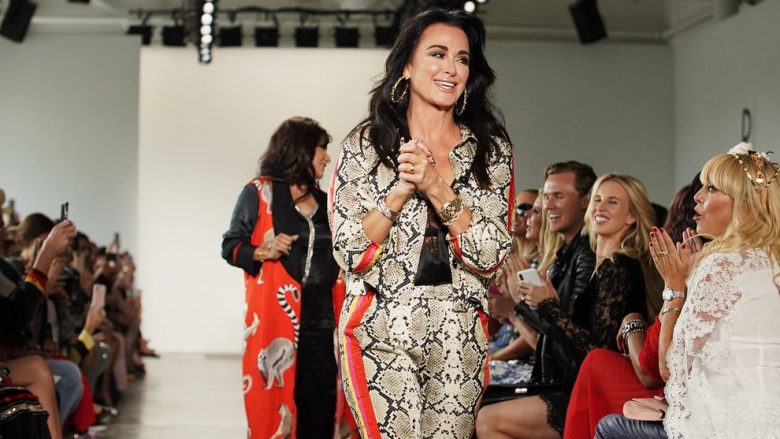 Fans may recall that Kyle used to have a store in Beverly Hills. In 2012, she partnered with  Alene Too to open the Kyle by Alene Too boutique,  according to Us Weekly. The store featured the “RHOBH” star’s favorite designs by luxury labels such as  Vintage Chanel, Parker, Camilla, and more.

The grand opening of Kyle’s flagship store was also featured on an early season of “The Real Housewives of Beverly Hills,” according to People. She later opened boutique branches in New York City and the Hamptons, but by 2018 Kyle parted ways with Alene Too, per Page Six.