“Real Housewives of New Jersey” star Teresa Giudice’s fiance, Luis Ruelas, and his ex-wife were involved in a tumultuous divorce and child custody battle that spanned several years and involved at least four domestic violence calls to her home, records from the Orangeburg Police Department obtained by Heavy show.

Louie Ruelas’ ex-wife, Marisa DiMartino, did not press charges in any of the incidents, according to the reports obtained under the New York Freedom of Information Law. The most recent incident was in 2016. In one incident, in 2012, DiMartino told police that Ruelas pushed her into a metal pole during an argument about the custody of their children.

Ruelas’ Ex-Wife Said He Has Threatened to Kill Her, Was ‘Violently & Constantly Jealous’ & the ‘Physical Violence Increased in Frequency or Severity Over the Past 6 Months’

Orangeburg PoliceThe report from the first time Luis Ruelas’ ex-wife called police on her then husband.

Orangeburg Police responded to a domestic incident call involving Ruelas and DiMartino on December 31, 2010, according to the documents obtained by Heavy. DiMartino, then known as Marisa Ruelas, told police she had a verbal dispute with her estranged husband.

According to the report, she said they were going through a divorce and he came to their Blauvelt home and got into an argument with her. Ruelas had left before police arrived and officers determined no offense was committed, records show. DiMartino refused to provide a written statement, according to the report.

In October 2012, police responded again to DiMartino’s Blauvelt home after she reported her estranged husband began arguing over finances after he dropped off their children, a report shows. “The dispute became heated and culminated” with Ruelas “pushing” DiMartino “into a metal support pole in the garage. This action took place in the presence of the couple’s son,” police wrote in the report.

DiMartino, then 38, refused medical treatment and declined to press charges against Ruelas, also 38 at the time, the report states. According to the report, police determined Ruelas could be charged with harassment. DiMartino also accused him of “unwanted contact,” the report states.

On June 7, 2016, DiMartino reported to police that Ruelas had come to her home the day before to pick up their son for visitation and wanted to talk to her, but she refused, according to the report. She said Ruelas then began banging on the door and yelling until she opened the it. The police told her future custody exchanges could be done at the police department and also advised her she could seek an order of protection from family court, the report states. DiMartino wrote in her statement that the incident scared her son.

On June 7, 2016, DiMartino again went to the police to report that Ruelas had picked up her son from school without telling her, which she said was a violation of their custody agreement. She said that he was not answering her calls. She told police she wanted to document the issue and would follow up with family court.

In that report, DiMartino checked yes to whether Ruelas had ever “threatened to kill you or your children.” She also checked yes to “is the suspect violently and constantly jealous of you,” and checked yes to “has the physical violence increased in frequency or severity over the past six months.”

On June 23, 2016, Ruelas called police to report that when he was picking up his son from school he saw DiMartino’s boyfriend’s car in the parking lot and said his son ran up to the car before it drove away. Ruelas told police that he had a temporary court order of custody of his son and that DiMartino was not allowed to pick him up at school. Ruelas told police he was not sure if DiMartino was at the school. Police did not take any action, the report states. 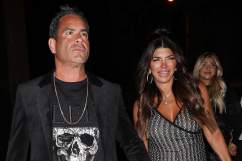 Despite their past issues and the domestic violence accusations, both Ruelas and DiMartino now say they have a good relationship as they co-parent their two kids. DiMartino talked about her ex-husband in an interview in 2021 with InTouch Weekly.

DiMartino said, “I’m really happy for Teresa and Luis. I’m happy for him. Luis is actually the father of my children, and he’s a really good person. In general, we got married, we were very young and had babies and then it fell apart. As normal things happen. We’re very good with each other, and that’s basically it. He takes care of me and my children, and that’s what it comes down to.”

A source told Page Six in May 2022, “Despite going through a divorce several years ago, Louie and Marisa are in a very good place and are both very actively involved with one another in co-parenting their two boys. Marisa has met Teresa, as Joe [Giudice] has met Louie. Everyone gets along. That’s the real story here.”

Ruelas addressed his past relationship during part three of the “RHONJ” season 12 reunion show in May 2022 on Bravo. He addressed rumors that Giudice said were being spread by Margaret Josephs. He said he had been in “toxic relationships” in the past.

“Two incidents have come up recently and those are arguments with my wife over my children when we were getting divorced,” Ruelas said after Andy Cohen asked him if he had a record of domestic violence. “If I am the only guy in America that basically had arguments with his wife and she walks into the house and calls the police, that’s the extent of it.” Cohen asked him if he hit her and Ruelas said, “No.”

Ruelas said his past being exposed in the media and on the show was “really painful. It’s not fair for people to leave relationships and do that to someone else because I’m on a platform with Teresa Giudice. Was I a perfect human being? Absolutely not.” 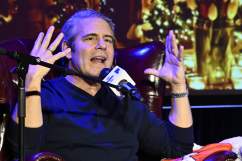