Kyle Richards said her husband Mauricio Umansky issued an apology to Erika Jayne after he laughed about her ex-husband and the former couple’s personal issues on camera.

The “Real Housewives of Beverly Hills” star told E! News that after Erika told her she was “hurt” by a RHOBH dinner scene featuring the Umanskys and Dorit and PK Kemsley, Mauricio apologized to the “Pretty Mess” singer.

“We did talk about it, it did hurt her feelings,” Kyle said. “And Mauricio also spoke to Erika as well as PK.”

Mauricio added that while he did apologize, he didn’t feel that he was mocking the former “Chicago” star.

“I apologized, PK and I both apologized to her,” Mauricio said. “And the reality is we weren’t making fun at her, of her, we were just in a conversation that was very funny.”

Kyle then warned her husband of 25 years to stop taking.

“Better to stop while you’re ahead,” she said. “They apologized, we apologized and moved on. It was confusing.”

In a dinner party scene that aired on “The Real Housewives of Beverly Hills” in September 2021, Kyle and Dorit talked to their husbands about some of Erika’s claims regarding her estranged husband, Tom Girardi. The foursome rehashed a story in which Erika claimed that her elderly ex confronted a robber at his Pasadena estate and was rushed to the hospital with an eye injury he sustained during the confrontation.

Erika also claimed that her police officer son went to check on his stepfather and ended up flipping his car multiple times on snowy roads in Pasadena. This, after Erika had recounted a tale about her ex-husband flipping his car outside of their home a few years earlier and being left unconscious for 12 hours. Erika said she refused to let a doctor operate on Tom’s brain due to his age and the length of time he had been unconscious. She previously claimed he suffered an ankle injury.

During the dinner party, PK Kemsley speculated that Erika’s outlandish stories were part of a coverup orchestrated by Tom Girardi, and he noted that the chances of two family members having car rolling accidents were nearly impossible.

“There’s lies all over the place,” Mauricio agreed, “If a doctor comes to you and says, ‘Your husband’s been hurt, he’s rolled over, he’s been unconscious, we need to operate, who says no?”

After Dorit noted that an ER doctor said the former power attorney may have brain trauma but suggested they operate on his ankle, the two couples burst into hysterics.

Mauricio was in tears from laughing at PK’s comments, and Kyle and Dorit also couldn’t contain their laughter.

Erika Called Out Kyle at the RHOBH Season 11 Reunion 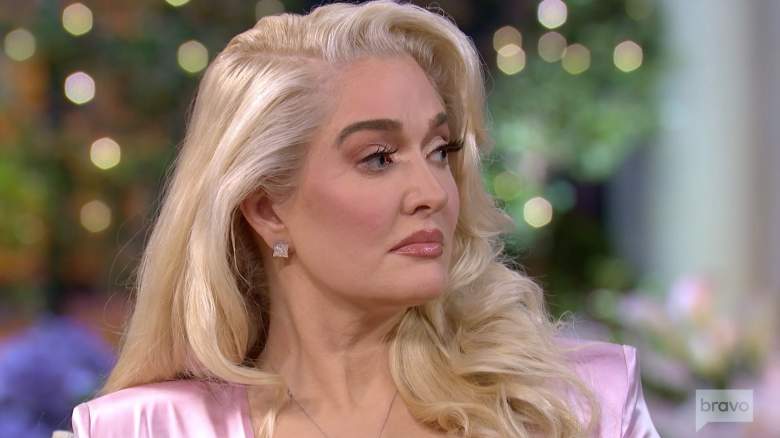 BravoErika Jayne at the RHOBH reunion

After the episode aired, Erika Jayne reacted on Twitter.  “Felt great watching this,” she tweeted in response to screenshots of her friends laughing at her.

An insider later told Page Six that Erika felt her only friend on the RHOBH cast was Lisa Rinna.

“Lisa is the only friend left because this week’s episode is hard for her to watch with some of the women making fun of her,” the source said at the time.

At the RHOBH reunion, Erika confronted her two co-stars.

“The thing that hurt me the most was to watch that dinner with you and Mauricio and PK,” Erika said, per Hollywood Life. “To watch the four of you mock my life and mock my family really hurt me. Especially after PK had been so kind, and we had worked so hard on our relationship. That sucked.”

Kyle admitted that she “felt so bad” after the dinner conversation.

“PK and Mo, they’re like brothers,” she explained. “They have their own opinions, and my husband has said all along he believes you, he does not think you knew anything. Don’t stress about that night because we do care about you.”

Dorit added, “We were trying to tell the story and it was getting jumbled and confused. And the more it got jumbled and confused, it became almost preposterous. It was not at all — I swear to you, hand on my heart, and I know Kyle [also] feels this way — ever to make a mockery of your situation.”