Melissa Gorga has let everyone know how she really feels about Jennifer Aydin. Ahead of the “Real Housewives of New Jersey” reunion special, Melissa took to Instagram to throw a healthy amount of shade at fellow “Housewife” and apparent foe, Jennifer.

Melissa shared a series of photos from the season, the first of her and Andy Cohen and the last one of her and her husband, Joe Gorga. The photos in between were of Melissa with the other “Housewives,” including her sister-in-law Teresa Giudice, Dolores Catania, Margaret Josephs, and her BFF, Jackie Goldschneider. The one person who was noticeably missing from the photos is Jennifer.

“Tonight! #RHONJ Reunion! I’ve been reading all your comments and I know how much you loved this season! Believe me we are on them for it being such a short one! We hear you,” Melissa captioned the pic.

“Notice I posted everyone except for one person who I feel is truly happy when family and friends are divided. Probably because she would throw her own mother under the bus for TV. Or if it would make Teresa happy,” she added, without mentioning Jennifer by name.

Jennifer has been known to stir the pot from time to time, and while some love her and think she’s spot on, others disagree. And it’s clear now that Melissa is amongst the latter.

Melissa Accused Jennifer of Being Jealous of Her & Jennifer Has Responded

Melissa did not hold back when sharing how she really feels about Jennifer. In fact, she accused the mother of five of being jealous of her. She also accused Jennifer of being “fake and conniving.”

“I’ve been on the show a long time and I know fake and conniving when I see it. When you don’t come for someone at all, and they are constantly trying to put you down and trying to cause riffs in your relationships, that’s a huge red flag,” she wrote.

“ENVY BABY! They might want to try to be the fun tipsy one like you, but they fail and just look sloppy. Lots of skeletons in the closet over there. I’m nice until I’m not. Pay attention everyone- you will see it. I love you all. Thank you for your support always,” Melissa concluded her post.

Melissa seems to be suggesting that something (or perhaps multiple things) went down at the reunion that made her completely over Jennifer. Based on the promo, it appears as though Jennifer ousts Margaret as being the person who started the rumors about Jackie’s husband being unfaithful. Given the fact that Melissa is so close to both Margaret and Jackie, this could be her way of sticking up for her friends. 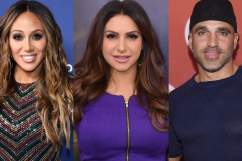 In a post of her own, Jennifer responded to Melissa’s digs. Jennifer shared a couple of photos of herself and one with her husband Bill Aydin from the “RHONJ” reunion, and added a caption that was clearly aimed at Melissa.

“Take a good look at what unbothered looks like. I’m on this show because of me – not because my sister-n-law or a more entertaining husband. My husband is a class act who respects women and would never stoop low for the cameras,” Jennifer’s Instagram response reads.

“I guess people envy what they don’t have – I share real and authentic stories, not fake, made up ones. And I see that some people are threatened by that. You can take your ‘sloppy’ comments and run with it all you want-hold on to it for dear life- ya got nothing else. Your group is infested with a snake that talks behind all your backs and you’re just salty… And Boring to Boot! So careful with all that reach, you’re gonna pull a muscle,” she added.

Melissa got some support from her besties, Margaret and Jackie, both of whom took to the comments section of the post to show their love for the Envy owner.

“Love you!! Omg the queen has spoken,” Margaret commented.

Unsurprisingly, “RHONJ” fans also lit up the comments section of Melissa’s post, sharing their own thoughts about her and Jennifer. While many fans seemed to agree with Melissa and show her support, others stood up for Jennifer.

“I love you, but that’s such a low f*cking blow,” one fan commented.

“YOU’RE A BOSS BABE,” wrote another.

“[You] are 100% right! The sad thing is to see how happy she looks when your family is divided,” added a third.

“No I think Jen is a great addition and you feel threatened. You have no story line jen does. I love you and Joe but Jen is gold for reality tv,” a fourth person wrote.

Melissa’s husband even got in on the commenting action, naturally siding with his wife.

“You tell them baby! Haters are going to hate,” Joe wrote.

READ NEXT: Jennifer Aydin Drops a Major Bombshell During the ‘RHONJ’ Reunion