The federal and state criminal cases against Thomas “Tommy” Manzo connected to the assault on his ex-wife, former “Real Housewives of New Jersey” star Dina Manzo, and her husband, Dave Cantin, appear to have stalled. Manzo was charged in New Jersey court in May 2021 and in federal court in June 2020. Neither case has gone to trial yet and there are no indications that will change anytime soon.

The 57-year-old Manzo, a Franklin Lakes resident who owns The Brownstone catering hall in Paterson, was freed on bail in 2021 after spending time in Monmouth County jail following his arrest there on state charges. He was arrested on May 11, 2021, and then freed on May 21, records show. His battle to make bond led to drama in the “RHONJ” world when it was revealed Caroline Manzo, who is both Dina Manzo’s sister and married to Tommy Manzo’s brother, Albert Manzo, wrote a letter supporting his release.

According to NJ.com, Caroline Manzo called Tommy “kind-hearted and caring” in a letter read out in court during a bond hearing. Manzo has denied any wrongdoing with his attorney, Michael Critchely, telling NJ.com, “A reality TV show is more believable than the baseless claims against Tom Manzo. The indictment is much ado about nothing and Tom Manzo looks forward to ending this nonsense once and for all at trial.”

In deciding to grant him release pending trial, a “judge cited Manzo’s high profile in the community, lack of criminal record and numerous letters of reference from members of the community, including members of the clergy and law enforcement,” NJ.com reported, adding that the judge didn’t think Manzo was a flight risk and was already on pre-trial release in the federal case, saying it would be “rather difficult for Mr. Manzo to flee.”

The Monmouth County Prosecutor’s Office Says No Trial Date Has Been Set in the State Case Against Thomas Manzo, Who Faces Up to 20 Years in Prison if Convicted

It’s unclear exactly where the case in Monmouth County stands, but a spokesperson for the prosecutor’s office told Heavy there is no trial date set. Heavy has filed a public records request for an update on what hearings have been held, but has not received any documents or information as of July 2022. It was not immediately clear when the next court appearance for Manzo is.

A Bayonne, New Jersey, man, James Mainello, was also indicted on the same charges, except stalking, in 2019. The prosecutor’s office accuses Manzo of getting Mainello and an unidentified man to carry out a home invasion at Cantin’s Holmdel home on May 13, 2017. Both Dina Manzo and her then-boyfriend Cantin were assaulted, police said.

“Holmdel Police were summoned about 10:54 p.m. on May 13, 2017, to a townhouse on Banyan Boulevard in the township as a result of a 911 call reporting a home invasion robbery. Police responded and arrived on scene to find two victims who had freed themselves from zip-ties after having been assaulted multiple times with a baseball bat and robbed of the couple’s new engagement ring and $500 in cash,” the prosecutor’s office said. “Initial investigation led to the arrest and charging of assailant James Mainello in May of 2019. The ongoing 4 year investigation ultimately uncovered Manzo’s role in stalking both victims and his motivations for the robbery and assault carried out by Mainello and another still unknown assailant.”

According to the affidavit, Cantin and Dina Manzo had returned from celebrating Teresa Giudice’s daughter’s first communion when they were assaulted and robbed. They told police one of the assailants said, “That’s what you get for f***** with a guy from Paterson.” 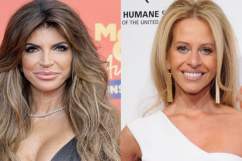 There Have Been Several Delays in Tommy Manzo’s Federal Case & No Trial Date Has Been Set, but His Co-Defendant Pleaded Guilty & Was Sentenced to 30 Months in Prison

“The ex-husband of one of the stars of the Bravo television show ‘The Real Housewives of New Jersey,’ and an organized crime soldier were arrested today on charges of planning and carrying out an assault of the Bravo star’s current husband in exchange for a lavish wedding reception,” federal prosecutors said in a press release.

His co-defendant, John Perna, a Cedar Grove, New Jersey, resident who prosecutors say has ties to the Lucchese Crime Family, pleaded guilty to aggravated assault and was sentenced in June 2021 to 30 months in federal prison, according to prosecutors. According to the press release:

In the spring of 2015, Manzo, one of the owners of the Brownstone Restaurant in Paterson, New Jersey, allegedly hired Perna to assault his ex-wife’s then-boyfriend in exchange for a deeply discounted wedding reception for Perna held at the upscale venue. Perna, who is a ‘made man’ in the Lucchese Crime Family with his own crew, worked with his associates to plan and carry out the assault, which took place in July of 2015. In exchange for committing the assault, Perna held a lavish wedding reception at Manzo’s restaurant for a fraction of the price, which was paid by another Lucchese associate and close friend of Manzo’s. The wedding and reception, held in August 2015, were attended by approximately 330 people, and included many members of the Lucchese Crime Family.

The charge against Manzo for allegedly falsifying and concealing records related to the federal investigation of the July 2015 assault relates to federal grand jury subpoenas that were sent to the Brownstone Restaurant seeking documents related to the August 2015 Perna wedding reception. Manzo failed to turn over relevant documents in response to those subpoenas and deliberately submitted a false document regarding the reception to the government, along with a false certification. In November 2019, agents with the FBI executed a search warrant at the Brownstone Restaurant and seized invoices for the August 2015 Perna wedding reception and other relevant documents that were not previously turned over.

In May 2022, prosecutors and Manzo’s attorneys jointly sought and received a continuance in the case until August 8, 2022, to “permit defense counsel the reasonable time necessary for effective preparation in this matter,” court records obtained by Heavy show. The case has been continued multiple times since Manzo’s arrest and a trial date of May 9, 2022, was delayed to a date that hasn’t been set yet, records show.

Also in May, Manzo’s bond conditions in the federal case were modified, court records show. The order from U.S. District Judge Kevin McNulty states, “the conditions of defendant Thomas Manzo’s pretrial release are hereby MODIFIED to remove the $100,000.00 unsecured appearance bond and permit defendant Thomas Manzo’s continued release upon the deposit of cash in the full amount of the $100,000.00 bail, via certified check made payable to Clerk, U.S. District Court.”

In September 2020, Manzo’s attorneys requested he be allowed to travel from New Jersey to New York for work without having to make a request from authorities:

We write to seek modification of Mr. Manzo’s conditions of bail such that he be permitted to travel to the State of New York without first seeking permission from Pre-Trial Services. Mr. Manzo, who is in the catering business, does a great deal of catering work in New York, including for clients such as Memorial Sloan Kettering and Staten Island University Hospital. In addition, Mr. Manzo has an ownership interest in several properties located in New York, and, prior to his arrest, Mr. Manzo sought medical treatment from his cardiologist in New York. Because Mr. Manzo does not pose a flight risk, nor a danger to others, we respectfully ask that the Court modify his bail conditions.

To date, Mr. Manzo has complied with all terms of his release, including providing PreTrial Services with further information regarding his finances to the satisfaction of Pre-Trial Services, as well as submitting to a home check. Accordingly, Andrew Dziopia, Mr. Manzo’s Pre-Trial Services Officer, has indicated that he does not have any objection the modification of bail conditions sought by Mr. Manzo. Unfortunately, the Government has advised that it objects.

A judge eventually sided with Manzo. He also had to surrender his passport and travel documents and cannot have contact with Dina Manzo and Dave Cantin, along with witnesses and his co-defendant, records show. 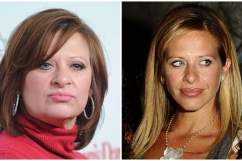