ABC The logo for 'Roots: The Gift'

No one could have known it at the time, but the made-for-television movie “Roots: The Gift” was pretty much a “Star Trek” convention… before most of its talent ever even worked on “Star Trek” or actually attended a convention. ABC premiered “Roots: The Gift” on December 11, 1988, according to the Internet Movie Database. The Christmas-themed movie followed the network’s landmark 1977 miniseries “Roots,” which was based on Alex Haley’s 1976 novel “Roots: The Saga of an American Family,” and won nine Emmy Awards. A detailed look at the Internet Movie Database entry reveals that more than a dozen “Trek” actors or crew were involved in “Roots: The Gift.”

The site AlexHaley.com features the following synopsis of “Roots: The Gift”: “In December 1775, Cletus Moyer (Avery Brooks), is a free black Northerner in colonial America, helping slaves escape captivity. In the days just prior to Christmas, a group of bounty hunters led by Hattie Carraway (Kate Mulgrew), captures Moyer. Because of his capture, dozens of slaves who have already left their plantations are in danger of being captured as well. Cletus Moyer implores two slaves from a nearby plantation to take his place: Kunta Kinte (LeVar Burton), a Mandinka in his mid-twenties who was captured in what is now called The Gambia, a country in West Africa, and Fiddler (Louis Gossett Jr.), an elderly man who was born into slavery. Kunta is eager to help (and to escape himself), but Fiddler is unwilling, fearful of the consequences if they are caught.”

Scenes from ‘Roots: The Gift’

According to the Internet Movie Database, in addition to Burton, Brooks, and Mulgrew, other “Star Trek” actors and behind-the-scenes talent who worked on “Roots: The Gift” included: Jerry Hardin, Fran Bennett, Tim Russ, Jimmie F. Skaggs, James McIntire, Gerald Fried, John A. Alonzo, Dodie Shepard, Julia Walker, and Greg Barbanell. Their contributions to ‘Star Trek,” in all cases according to Memory Alpha, StarTrek.com, or the Internet Movie Database, included:

LeVar Burton (actor): Burton reprised his groundbreaking role as Kunte Kinte in “Roots: The Gift.” The television movie aired in 1988, during the second season of “Star Trek: The Next Generation.” Burton played Geordi La Forge for all seven seasons of the show, as well as in the four “TNG” features, and is confirmed to reprise the character during the third and final season of “Star Trek: Picard.” Burton also directed episodes of “The Next Generation,” “Deep Space Nine,” “Voyager,” and “Enterprise.”

Kate Mulgrew (actor): The actress essayed the role of Hattie Carraway in “Roots: The Gift.” She played Captain Kathryn Janeway for the entire seven-year run of “Star Trek: Voyager,” voiced Janeway (or Mirror Janeway) for the games “Star Trek: Elite Force,” “Star Trek: Legacy,” and “Star Trek Online,” was Admiral Janeway in the “Borg Invasion 4D” ride at the Star Trek Experience, and has been providing the voice of Hologram Janeway on the new animated series, “Star Trek: Prodigy.”

Avery Brooks and Kate Mulgrew in ‘Roots: The Gift’ 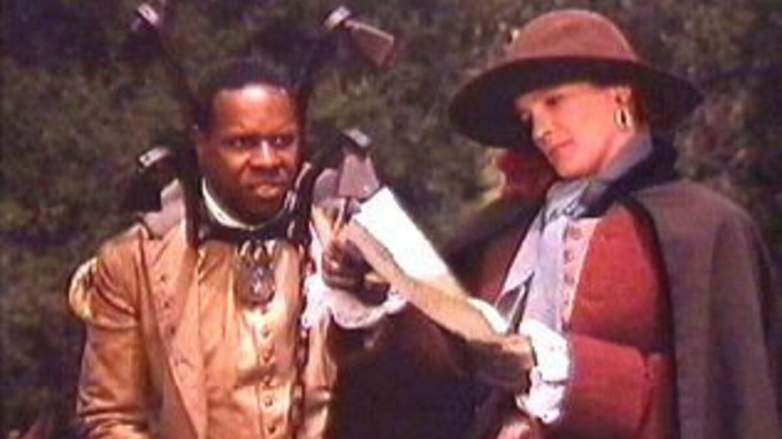 Fran Bennett (actor): A veteran performer whose career spanned from the 1950s to 2021, Bennett co-starred as Mammy May in “Roots: The Gift.” Her “Trek” work included the role of Fleet Admiral Shanthi in “The Next Generation” “Redemption II.” She also played a Vulcan midwife in a scene that was cut from “Star Trek (2009), but can be seen in the Special Edition DVD and Blu-ray versions of the film. According to Memory Alpha, she died in 2021.

Tim Russ (actor): The actor co-starred as Marcellus in “Roots: The Gift.” Russ went on to guest-star as Devor in the “TNG” episode “Starship Mine,” T’Kar in the “DS9” episode “Invasive Procedures,” and an unnamed Enterprise-B lieutenant in the film “Generations.”

Jimmie F. Skaggs (actor): Skaggs co-starred in “Roots: The Gift” as Scarvie. A few years later, he guest-starred as Glinn Boheeka in the “Deep Space Nine” episode “The Wire” and voiced several characters for the video game “Star Trek: Away Team.” According to Memory Alpha, he died on July 6, 2004, at the age of age 59.

James McIntire (actor): McIntire played the character Jubal in “Roots: The Gift.” A year later, he guest-starred as Hali in the “TNG” episode “Who Watches the Watchers.” Hali was a Mintakan hunter and a member of Nuria’s community on Mintaka III in 2366.

Gerald Fried (composer): He composed music for almost 200 films and television shows, winning an Emmy and earning an Oscar nomination, according to StarTrek.com. The official site reported that Fried composed the music for the “TOS” episodes “Shore Leave,” “Catspaw,” “Friday’s Child,” “Amok Time,” and “The Paradise Syndrome,” adding that snippets of music from those episodes was utilized by the production in 18 other episodes.

John A. Alonzo (cinematographer): Alonzo was an Emmy Award-winning and Oscar-nominated director of photography, according to IMDB, who served as the cinematographer on “Star Trek Generations.” He died on March 13, 2001, at the age of 66.

Greg Barbanell (foley artist): Barbanell, according to IMDB, is a veteran foley artist with 578 credits and counting. He worked on the video game “Star Trek: Starfleet Academy.”

“Roots: The Gift” is available to buy on Amazon Prime Video.