Getty Super Bowl Halftime performers. Who will be the surprise?

Judging from history, it was predictable. Many past Super Bowls have seen surprise guest performers – some of music’s biggest names – suddenly join the announced performers. This time, you can expect any surprise performers would come out of the worlds of hip hop or R&B. And so it was.

50 cent has Been spotted rehearsing for the #SuperBowl pic.twitter.com/h1m0bf8iXV

You can watch the full halftime show here.

On Twitter, people are already speculating on who the surprise performer will be, with guesses ranging from Ice Cube to Lil Kim.

Hope Pitbull is the surprise guest at the Super Bowl! pic.twitter.com/bsSlZQafyo

One Twitter user is wishing for a Tupac Shakur hologram.

1. An incredible half time show from @Eminem with surprise guests @50cent and hologram Tupac

3. Both teams have fun

A trailer video, which you can watch below, was released by “Straight Outta Compton” director F. Gary Gray. It is titled, “The Call.” It gives a hint of some of the songs you can expect during the halftime show.

The main performers have been announced. They are Eminem, Snoop Dogg, Mary J. Blige, Kedrick Lamar, and Dr. Dre.

These are the songs they are singing in the trailer: “Rap God” by Eminem. “The Next Episode” by Snoop Dogg. “Family Affair” by Mary J. Blige. “Humble” by Kendrick Lamar. “California Love” by Dr. Dre.

The Super Bowl will be held on February 13, 2022, at SoFi Stadium in Inglewood, California. The Los Angeles Rams will take on the Cincinnati Bengals.

Many Top Artists Have Surprised Audiences at Past Super Bowls 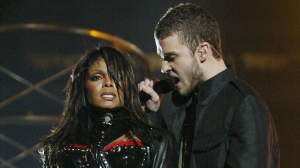 GettyJanet Jackson and Justin Timberlake are photographed at the halftime show at Super Bowl XXXVIII.

Who are some of the iconic surprise or guest performers at past Super Bowl halftime shows?

In 2001, according to MyNBC5.com, Aerosmith and ‘N Sync were singing when Nelly, Mary J. Blige, and Britney Spears surprised audiences and took the stage.

In 2003, Shania Twain and No Doubt were performing when Sting joined them as the surprise guest performer, the television station reported.

Who can forget Super Bowl 2004? Janet Jackson, P. Diddy, Nelly, and Kid Rock were performing when Justin Timberlake came out, and, of course, there was a famous wardrobe problem.

In 2011, according to the television station, The Black Eyed Peas were performing when Slash and then Usher showed up.

In 2013, Beyonce was performing when Destiny’s Child’s Kelly Rowland and Michelle Williams suddenly joined her.

Dr. Dre, Snoop Dogg, and Blige spoke about what people can expect at a press conference before the Super Bowl. You can watch that video above. Dre said the artists want to inspire kids and make it the “best Super Bowl halftime show ever.”

Snoop said the show will be “gangster.”

The artists explained why it’s important that hip hop is a focus in the 2022 Super Bowl.

“Keeping it all the way real, I’m not trying to be egotistical or anything like that, but who else could do this show in LA?” said Dre.

He said that it’s an LA Super Bowl featuring an LA team and LA hip hop and soul.

He said that Blige is the “Queen of R and B” and Dre is the “King of hip hop,” describing hip hop as “representing about change and moving forward. We know a lot of people didn’t want hip hop on stage, but we’re here now and ain’t nothing you can do about it.”

Dre called hip hop the “biggest genre of music on the planet right now.” He said it took too long for “us to be recognized…We’re going to do it so big that they can’t deny us in the future.”

Dre said they are going to be “dope” on stage.