MTV "Teen Mom 2" ratings took a hit after Jenelle Evans was fired and again after Chelsea Houska revealed she was quitting.

Teen Mom 2 ratings took a hit after Jenelle Evans was fired and again after Chelsea Houska revealed she was quitting. With the ratings being the lowest they’ve ever been for the series, some wondered if the show was being canceled.

The rumor circulated after social media influencers, including some of the Teen Mom stars, shared a Celebuzz story that asked if the show was going to be renewed again. Briana DeJesus and Jade Cline both posted the Celebuzz article on their Instagram story. The Hollywood Gossip also circulated a story about Teen Mom 2 potentially being canceled because of less than stellar ratings. 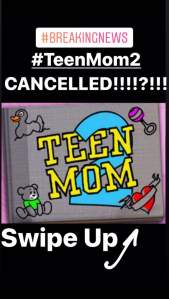 Heavy reached out to MTV to see if they could confirm or deny the rumor, but they didn’t immediately respond.

While it’s possible the show could be canceled, it’s also unlikely. Teen Mom 2 is the highest-rated franchise out of the Teen Mom series, and Briana has been sharing videos and photos that show cameras following her around. It could be for a different project, but she hasn’t mentioned anything about filming with anyone besides MTV.

‘Teen Mom 2’ Ratings Are the Lowest They’ve Ever Been

One reason fans might be more likely to believe the rumor about Teen Mom 2 being canceled is that the ratings dropped off when Chelsea revealed she was leaving the show. While the season premiere was a hit, three out of the last six episodes garnered fewer than 600,000 views, according to The Ashley’s Reality Roundup.

The most recent episode had the second-worst views of all-time, with 560,000 viewers, as noted by Showbuzz Daily.  Before that, the worst-ever episode of Teen Mom 2 aired this season on November 24, with 540,000 people tuning in.

For reference, Teen Mom 2 used to average ratings that were in the 900s. When Evans was fired, the ratings tapered off to the 800s but stayed in the high 700s or low 800s during Seasons 9 and 9A.

Not all the viewership this season has been poor. The September 1 premiere had a strong open with more than 800,000 viewers and hovered around that number until they plummeted into the 500s during the last week of October.

Why Did Chelsea Quit ‘Teen Mom 2’?

Chelsea revealed she was leaving the series in an Instagram post, confirming reports that she had quit the series. Fans were largely shocked by the decision, but Chelsea encouraged her fans to continue following her journey.

After much thought and discussion with my family and friends, Cole and I have decided that this season will be our last. We are forever thankful to MTV and our crew, who are like family to us. We’re parting on the best of terms and will stay in touch long after this. We’re proud to have been able to share our story and are so grateful to the fans who have followed our journey from the beginning.

Chelsea, who is pregnant with her fourth child, didn’t give a specific reason for her departure, but reports claimed Chelsea didn’t want her 11-year-old daughter Aubree to go through puberty in front of cameras.

“She wants Aubree to go into her teenage years with privacy, and not be on reality TV anymore,” an insider told The Ashley. “If Chelsea were to do any more television shows in the future, she would not do anything about her personal life.”

“She always knew she would leave the show once Aubree reached a certain age,” the person continued. “She didn’t want her to go through puberty on-camera and be subjected to hurtful and sometimes creepy comments from viewers.”

To find out what happens next, don’t miss Teen Mom 2 when it airs Tuesdays at 8 p.m. Eastern time on MTV.

READ NEXT: Jo Rivera on Fighting Kailyn Lowry For Custody of Isaac

Unlock the latest Teen Mom news, rumors and exclusives — direct to your inbox. ↓