Jenelle Evans revealed she was suffering a potential medical issue on her Instagram Story.

Jenelle Evans Says She Had Active ‘Heart Palpitations’ During an Ultrasound 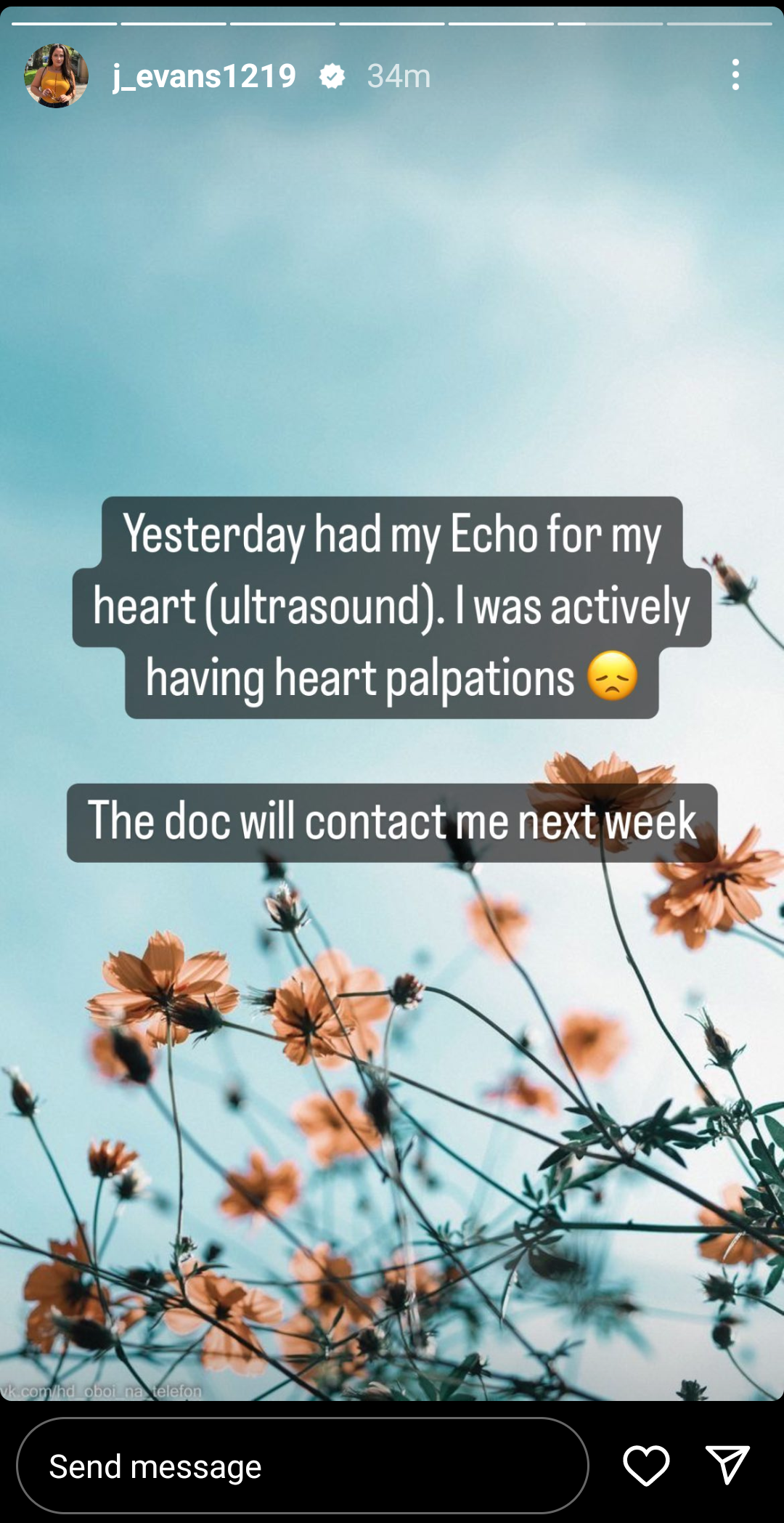 Evans took to her Instagram Stories to tell her fans about a potential health scare she is dealing with.

“Yesterday had my Echo for my heart (ultrasound). I was actively having heart palpations,” she wrote. “The doc will contact me next week.”

This is not the first time that Evans has suffered heart issues.

In March 2022 she was “rushed to the hospital” after experiencing chest pains, the Daily Mail reported at the time.

Evans made a post about the ordeal writing, “Was in the hospital all day yesterday for chest pain [crying emoji].”

A second post gave more details about her diagnosis.

“New blood test results are in for me…I have 2 of the anti-acetylcholine receptor antibodies: blocking and binding in my system. Usually found in myasthenia gravis,” Evans wrote, according to the outlet.

“My entire body gets in so much pain and sometimes I lay in bed and cry,’ she said.[For] a long time, no one believed my symptoms until I got a second opinion from a new neurologist recently,” Evans revealed according to the outlet.

Fans Think Jenelle Evans Is ‘Crying Wolf’ About Health Scare: ‘She Can’t Assume the Palpitations Are Caused by Anything Other Than Her Own Actions’

Fans didn’t have much sympathy for the “Teen Mom” star and ripped her apart on a Reddit thread titled, “if she didn’t do all that bad eating and bad only fans content.”

“$1000 says she’ll post another s***** tiktok dance video within 48 hours. And be riding another roller coaster by Sunday,” another fan commented.

“Musta been all the spicey,” someone said.

“Usually from experience of having tons of test cuz I have seizures they call u right away and tell u to come into the office. She’s stringing ppl along cuz she’s desperately for attention and drug money,” someone pointed out.

“Is she crying wolf? When it’s truly serious, will she realize it? Will we?” another fan asked.

“Palpitations are very common and often not a sign of anything more serious,” someone explained. “Caffeine, dehydration, and meth are huge contributors to palpitations. Until she eliminates these from her life (at the VERY LEAST), she can’t assume the palpitations are caused by anything other than her own actions.”

“So many people in this world with very serious conditions,unimaginable pain and discomfort,tolerating it in their best ways with bravery, stoicism and quiet dignity,then ‘yet again’ you have Jenelle,” another person wrote.

“If your doc is having you wait a week, then you’re probably fine,” someone said.