Kailyn Lowry is opening up about how “accurate” the reality show “Teen Mom” really is.

In her court deposition, Lowry was asked if the show “depicts reality.” She replied: “Sometimes.”

Asked if that implies that it sometimes doesn’t, Lowry said, “Yes.”

The reality star was then asked to provide an example of a time the series did not reflect the truth and offered up that the show said she was from Nazareth, Pennsylvania, which Lowry stated is “not accurate.”

Asked if producers ever “suggest courses of action or things to say to you,” Lowry replied: “Yes… Before every shoot we have essentially a schedule of what we are going to film. So if I am taking my kids to the dentist, they might ask me to discuss going to the dentist in the car on the way to the appointment.”

Later on in the deposition, however, the question of the show’s accuracy surfaced once again. Lowry was asked: “On a scale of zero percent to a hundred percent. What percent do you think you are portrayed accurately?” 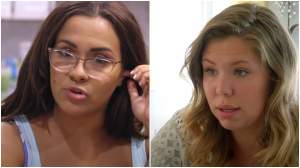 For months now, Lowry and her co-star, Briana DeJesus, have been embroiled in an ugly legal battle.

On July 9, 2022, People reported that Lowry filed a defamation lawsuit against DeJesus, who said in an interview that Lowry had punched her ex-boyfriend, Chris Lopez, and broke into his mother’s home.

Lowry and DeJesus have been feuding since 2017 when the latter first joined “Teen Mom.”

After the lawsuit was filed, a spokesperson for Lowry told People: “Kail is disheartened by the recent untrue statements made by her fellow castmate, Briana Dejesus, concerning Kail’s absence from a recent episode and involvement in crimes that she never committed. Kail takes these statements very seriously. ”

The statement continued, “After necessary self-reflection, Kail has decided to handle this situation with Ms. Dejesus by exercising her legal right to protect herself and her brand in Court. She is hopeful for a quick resolution of this matter so this feud can finally be put to rest.”

On March 30, 2022, The Sun reported that Lowry was “seen grinning from ear to ear” after leaving a court hearing the previous day. She subsequently told a reporter from The Sun: “I’m okay. I feel good.”

According to The Sun, Judge Egan has not yet ruled to dismiss the case. He will offer his ruling at a later date.

In March 2022, DeJesus’ lawyers filed a Motion for a Protective Order. Osceola County court records obtained by Heavy show that the motion would “prohibit… Lowry… from seeking discovery from Ms. Soto on the subject of her sexual relationship with a third party without any confidentiality protection.”

The papers continue: “The subject of the testimony is entirely irrelevant to the facts at issue in this case, and the line of questioning is solely aimed at prying into the salacious details of Ms. Soto’s private life for the benefit of embarrassing Ms. Soto.”

Loading more stories
wpDiscuz
0
0
Would love your thoughts, please comment.x
()
x
| Reply
In her deposition, Kailyn Lowry opened up about how 'Teen Mom' portrayed her and whether the show is scripted or not.