Fans are loving this TikTok from Kailyn Lowry.

Though the video was initially posted in February 2022, Lowry’s Reddit fans have repurposed it and posted it to the platform.

In the TikTok, Lowry started off by stating, “Ok, so I chopped all my hair off. I’m gonna go see if the boys notice.” She then visited each of her sons to ask them whether they noticed anything different about her.

The boys didn’t seem to pick up on it. That is until Lowry visits her eldest son, Isaac, and he simply said, “Your hair…?”

At the end of the video, Lowry told her boys, “I cut all my hair off,” at which point Lux adorably replied, “Whaaaaaat!?”

Reddit users were excited to get in on the fun, with one person commenting, “That is definitely a house full of men, they will NEVER notice your hair lol.” Another added, “When i got my second nose piercing, my husband and his two friends didn’t notice all day until i pointed it out.”

Lowry Weighed in on Her Relationship with Chris Lopez 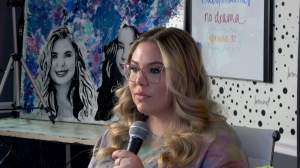 YouTubeKailyn Lowry reveals why she quit Teen Mom after 11 seasons

Lowry has four children: Creed Lopez, Isaac Rivera, Lux Lowry, and Lincoln Marroquin. And while fans can’t seem to get enough of her kids, it hasn’t been smooth sailing when it comes to Lowry’s baby daddies.

On the April 26, 2022, episode of “Teen Mom 2,” Lowry told producers that she felt as though she and her ex, Chris Lopez, struggle to communicate.

“I hope that when his new baby comes, he forgets about Lux and Creed and doesn’t want anything to do with them,” she told “Teen Mom 2” producers.

Asked if she hopes Lux and Creed will “bond” with Lopez’s newborn son, she said, “They’re an hour away from each other, which is very different than the situation of Lincoln and his brother and Isaac and his sister. He’s very minimally involved right now, so – either be all in, or be all out, and by all in, maybe you need to move closer with your girlfriend. Because you’re not going to spend time with them every other weekend and then them not see their other sibling. So, I think be closer so you can be involved, or don’t be involved at all.”

On Reddit, users expressed their frustration with Lowry’s “thoughtless” comments.

In a Reddit thread, one user wrote, “Help me here- does she think that all of her baby daddy’s should organize custody around each other for it to work for her??”

Another shared, “Yeah this is easily one of the worst things she’s said. She knows how she felt not having her father in her life why would she wish something like this on her children.”

And a third weighed in, writing, “Yeah I’m literally shocked she could say it on TV. I’m sure she says way worse sh** 24/7 to them about not standing their dad.”

Lowry’s followers weren’t the only ones who had something to say.

On an Instagram Story that was later obtained by a “Teen Mom” fan account, Lopez was asked to respond to the claims that Lowry “hopes you are out of your sons’ lives.”

According to The Sun, Lopez replied, “And watch you all somehow turn this on me. Somebody out there right now is defending them by blaming me for what they said.” He continued, “If you are going to comment on my life, at least know what you are talking about. Just because a narrative is being told doesn’t mean it’s the truth.”

Another fan asked how he felt being part of a new family when his other children “are not part of it.”

Lopez responded, “Bruh, this sounds like something the boys’ mom would say. When I get Lux and Creed they get to see their brother. My kids all get treated the same. Nothing changes. I just get more time with one than the other two.”