After clearing his Instagram of any content, Colton Underwood has returned to the social media platform. He stopped posting after ex-girlfriend Cassie Randolph filed a restraining order against the former Bachelor and he eventually removed all former posts.

While he has yet to add any new posts, he did share pictures of his Christmas on his Instagram Story on December 28. Across the photos, he wrote, “Hope everyone had a great holiday! Mine was spent with family. Missed y’all.” 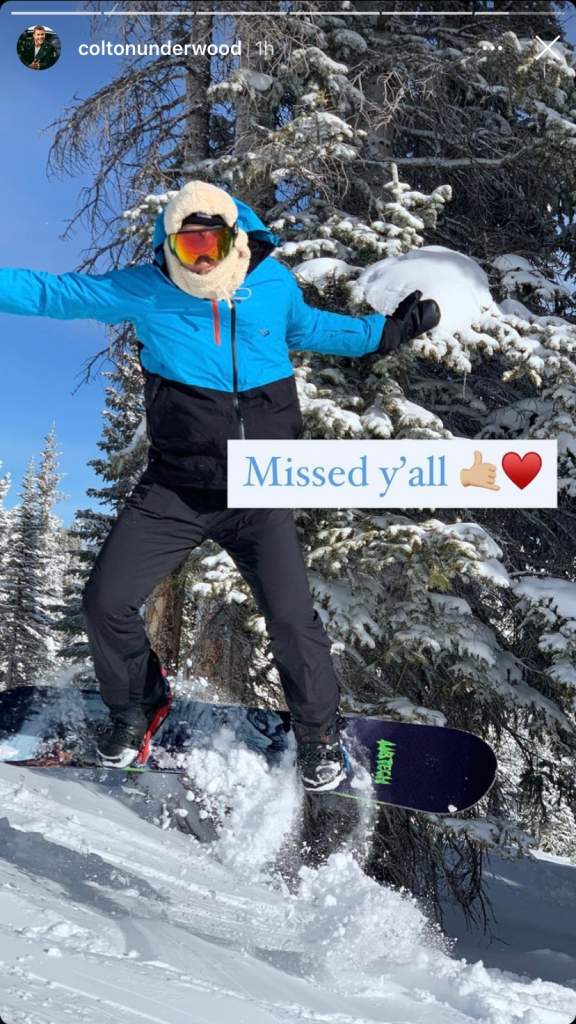 Underwood famously jumped a fence after Randolph broke up with him on The Bachelor, eventually chasing after her. Despite leaving the dating franchise together, the two announced their split in May. Bachelor Nation was shocked when Randolph filed a restraining order against the former football player for harassing messages, surprise appearances at her home and a tracking device he planted on her car.

When Randolph dropped the restraining order in November, Underwood finally broke his silence. He told TMZ, “Today Cassie asked the court to dismiss the temporary restraining order against me. The two of us were able to reach a private agreement to address any of Cassie’s concerns.”

He continued, “I do not believe Cassie did anything wrong in filing for the restraining orders and also believe she acted in good faith. I appreciate everyone’s respect for privacy regarding this matter.”

On December 29, Underwood posted in his Instagram story again with information on his Peloton profile.

Randolph Filed a Restraining Order Against Underwood in September

It was revealed in September that months after their split, Randolph had filed a restraining order against Underwood.

According to court documents obtained by TMZ, Randolph accused Underwood of stalking and harassing her. She claimed he was sending text messages accusing her of being with an ex and loitering outside her and her parents’ homes into the early hours of the morning.

She alleged he admitted to planting a tracking device on her car and sending anonymous texts to her and himself to seem as though they were victims of the same stalker.

She later extended the restraining order in October and filed a police report.

Her lawyer, Bryan Freedman, told TMZ, “It was her intention to first, try and work through this process privately in a manner that gives both her and Colton safety, security and respect. We are confident this is possible.”

In early November, Randolph submitted a “request for domestic violence restraining orders against [Underwood] shall forthwith be dismissed with prejudice,” according to court documents obtained by People. It continued, “the temporary restraining orders against [Underwood] shall forthwith terminate and cease to be of any force and/or effect.” Their hearing date of November 6 was canceled without plans to reschedule.

“I’ve reached out, just as far as support,” Harrison told the outlet. “I have not talked to them and I am very glad to see that they … [are] taking this off-line. They’re not settling this in the press, they’re hopefully taking care of themselves and each other and being smart about this.”

“I just wish them both well, I wish Colton and Cassie well,” he said. “It’s a very unfortunate situation for sure, and I think a surprising one. Honestly, it was a pretty shocking headline.”

It is unclear if he has been in contact with either since these statements were made.

READ NEXT: Bachelor in Paradise’s Carly Waddell Opens Up About Divorce