Bachelor in Paradise is officially returning to television! After production on the show was forced to take time off due to the coronavirus pandemic, they have found a way to safely move forward — and it’s officially happening!

Up until this point, there have been rumors that the show was going to start filming this summer, but the network hadn’t actually confirmed any details. On Wednesday, April 7, ABC made the official announcement by sharing a very simple post on Instagram.

The announcement was made by way of a video in which water washed up on sand to reveal that the show would be back on television beginning on Monday, August 16, 2021, at 8 p.m. Eastern.

The post was liked more than 27,000 times in the first two hours it was posted. Fans can’t seem to wait to tune in to watch some of their favorite singles get another shot to find love.

ABC also confirmed that the new season of The Bachelorette starring Katie Thurston will begin airing on June 7.

The ‘Bachelor in Paradise’ Cast Has Not Been Announced

The new cast of Bachelor in Paradise has not yet been announced. There have been several rumors circulating about who might be joining the show, but ABC hasn’t teased anyone outside of Dr. Joe Park (pictured above), who was on Tayshia Adams‘ season of The Bachelorette.

An insider previously told E! News that producers are “hoping to get Blake Horstmann, Tia Booth, and Becca Kufrin” to join the new season. Other rumored singles include former Bachelor Peter Weber, his ex-girlfriend Kelley Flanagan, and the most recent Bachelor star, Matt James. However, with reports that Matt is back with Rachael Kirkconnell, that last one seems highly unlikely.

As for who fans would love to see in Paradise, those names include Madison Prewett, Ivan Hall, Brendan Morais, Ben Smith, Abigail Heringer, Pieper James, Bri Springs, and Serena Pitt, to name a few. 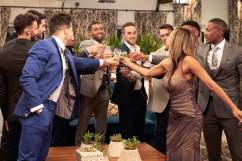 At the present time, it’s unclear who will host the new season of Bachelor in Paradise. Longtime host Chris Harrison has decided to take some time away from the franchise after he made some racially insensitive remarks during an interview with former Bachelorette star Rachel Lindsay.

Chris did not host the After the Final Rose special that aired following Matt James’ season of The Bachelor. He also will not be hosting Katie Thurston’s season of The Bachelorette, according to an announcement made by ABC. The network has not given any indication on whether or not Chris will be fired.

While some fans think that the network needs to have someone new as the host moving forward, the overwhelming majority of fans seem to want to see Chris back on set.

There have been some rumors about who might host the show if it isn’t Chris, including comedian Nikki Glaser, but nothing has been reported as “official” in any capacity. Additionally, Chris has not commented further on his role within the franchise.

Loading more stories
'Bachelor in Paradise' will return to television on August 16.