The Bachelorette is all about love, roses, and fashion. But fans have wanted to call the fashion police several times during Katie Thurston’s season of the ABC dating show.

With two female hosts also on board in the aftermath of Chris Harrison’s recent exit from the “Bachelor” franchise, there have been more opportunities than ever for fashion hits — and misses.

After preview photos for the season 17 finale were posted online, “Bachelorette” fans zeroed in on host Tayshia Adams’ surprising look as she posed next to co-host Kaitlyn Bristowe. While Bristowe wore a bright yellow slip dress for the final episode, Adams was dressed in a gray pantsuit with a black jacket over top.

This isn’t the first time Adams wore a pantsuit on Thurston’s season of “The Bachelorette.” For episode 5, she wore a $2,000 Stella McCartney pantsuit and blazer, per Shop Your TV.  While that was a fashion “hit,” her latest look didn’t receive rave reviews from fans.

In the comment section to an Instagram post that featured Adams and Bristowe’s finale looks, fans reacted to Adams’ unusual outfit. Some questioned why one host was dressed for summer and the other for winter. Others wanted to know if Adams was hosting a magic show instead of a dating show.

There was also an entire thread dedicated to the outfit on Reddit, where several viewers called out longtime “Bachelor” stylist Cary Fetman for the offense.

“What in color guard hell,“ one fan wrote on Reddit.

“’Greatest Showman’ vibes,”  another commenter added. “Why, though?! You have a beautiful green, fun mustard yellow…and then drab dark gray??? Such a disconnect!”

“She looks like she should be on ‘Star Trek’…why would they do this to her?!” another fan asked of Adams’ ensemble.

“She’s about to pull a rabbit out of a hat. Someone get her a hat,” another chimed in.

Others wondered if  Adams was hosting a circus-themed date for Thurston. And another fan suggested that the show’s stylist was trying to cover up Adams so she would “stand out less” on Thurston’s big proposal day. 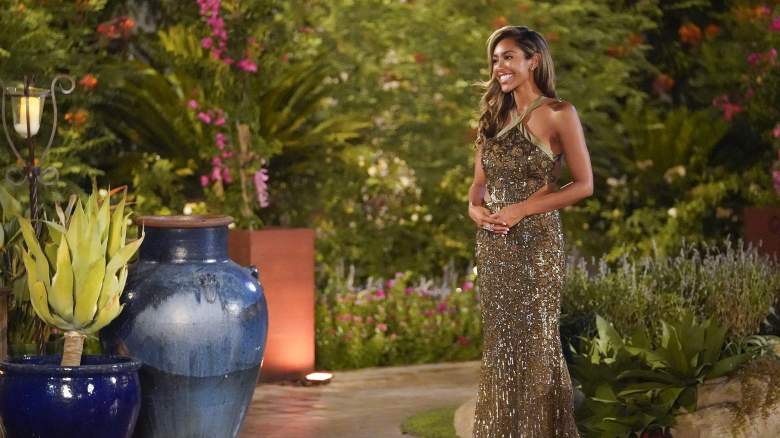 ABCTayshia Adams on an episode of The Bachelorette.

While he is getting some flack for Adams’ outfit, longtime Bachelor Nation stylist Cary Fetman has said the franchise star can pull off any look due to her skin tone and insane body.

“She can wear something that was camel that would blend into her skin or she could do a hot color — both would equally look great on her,” Fetman told Fashionista.”Things that normally I would stay away from, thinking this might wash somebody out… not with Tayshia. It was amazing how the neutrals were just as pretty as the brights.”

Fetman also elaborated to E! News as he reflected on Adams’ fashions during her past stints on the rose-filled reality franchise.

“Besides the fact that she has seven-foot legs that come up to my chin… Tayshia just has a style, she knows how to carry the clothes,” Fetman said. “Those legs! Boy, even when there was no slit, we certainly put one in to make sure those legs were out. Basically, it was like almost every outfit that didn’t have a slit, it somehow magically got a slit.”

“The truth really is Tayshia can take pretty much anything and know how to work it,” he continued.  “She knows how to wear clothes because she loves to wear clothes.”