ABC Michelle Young got engaged on the finale of 'The Bachelorette.'

Michelle Young’s “Bachelorette” winner has been revealed by Reality Steve.

Although Michelle’s season of the popular reality dating showing hasn’t officially started yet (it premieres on October 19, 2021), Reality Steve has already figured out who gets down on one knee on the show’s finale — and that’s Nayte Olukoya.

“We…know that Peter Izzo got a date right before rose ceremony #6, and then Nayte got the first date after rose ceremony #6 by pictures I posted. After that, nothing else really. Don’t know who made final four, or how hometowns worked and if they followed through with traveling to four guys’ hometowns,” Steve wrote in his October 5, 2021, blog post.

“The main thing you want to know is what happened at the end, right? Well, I got that for you. Had heard rumblings since the season ended but got the confirmation I needed the end of last week. Michelle is engaged to Nayte Olukoya,” Reality Steve added.

Nayte Made the Best First Impression on Michelle

Fans of “The Bachelorette” will officially meet Nayte when he steps out of the limo when the season premiere airs on October 19, 2021. Michelle easily fell for his charm, and it’s clear to see that the two have really great chemistry, as evidenced by the fact that she gives him her First Impression Rose. Fans will have to wait and see if Nayte is the guy to steal the first kiss, too.

“When you walk into a room, it’s hard not to notice Nayte. He has a smile that sparkles like the stars, he is always the life of the party,” Nayte’s ABC bio reads, in part.

The sales executive from Texas also commands a room thanks to his towering height. He stands proud at 6-feet, 8 inches tall; that’s nearly a full foot taller than his bride to be! 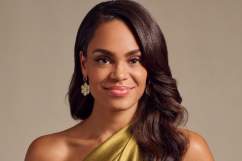 Michelle Young Age & Height: How Old & How Tall Is ‘The Bachelorette’?

Nayte Seems Smitten With Michelle, too

Nayte has been fairly active on social media since filming for “The Bachelorette” wrapped. However, he shared his very first post about Michelle on October 17, 2021.

“Well, I mean, just look at her,” he wrote, along with the heart-eyes emoji. While it’s not uncommon for contestants on the season to share photos from their time on the show, this caption seemed to give a little bit too much away, especially knowing that Nayte is the guy who ends up winning Michelle’s heart!

Fans took to the comments section of the post to share their excitement for Nayte and Michelle’s journey.

“Definitely watching this season!!! So excited for you,” added another.

“Ayyyy. Rooting for you,” a third person wrote.

“Beautiful I am rooting for you and Michelle can’t wait,” commented a fourth.

Of course, we have several weeks to watch Michelle and Nayte fall in love — and there will undoubtedly be several ups and downs that will play out before the finale airs. And then fans will get to see a proposal that is sure to be very special.