Blake Moynes opened up about his dating life.

Nearly four months after ending his engagement to “Bachelorette” star Katie Thurston, the Canadian wildlife manager is reassessing his life plan. The couple’s sudden split was capped off with the news that Thurston is dating John Hersey, one of Moynes’ rival suitors on the ABC reality show.

In November 2022, Moynes told the “Talking It Out With Bachelor Nation” podcast that he was “shocked” by Thurston’s new relationship so soon after their breakup. He also admitted that he was having trouble reconciling his former fiancee’s romantic relationship with the man who was supposedly just a friend.

“I still remember how happy I was in that moment [when I proposed],” Moynes said on the podcast. “But, like, this last little straw is very frustrating for me to want to keep holding on to being like, ‘No regrets, no regrets.’ And that’s what’s annoying… I just want it to go away.”

Blake Moynes Said He Will be Very ‘Picky’ Going Forward

In a February 2022 interview with Us Weekly, Moynes confirmed that he’s been on a “few” casual dates since splitting from Thurston, but that he’s “trickling” in the dating pool.

Moynes explained that his breakup with Thurston “hurt” him by making him realize that there are even more deal breakers on his list than he realized, making it even harder for him to find his soulmate.

“I’m finding the more that I fail, the more things that I find that I know I don’t want in a relationship,” he told the outlet. “I think I have more understanding of exactly what I want [and] I think [that] has made me more picky, but the right person will come along and I’ll know what it is because I’ve failed so many times now.”

He added that he has a “long list“ of traits he’s looking for in a future mate, but is in no rush for a serious romance at this point because he’s happier than ever on his own.

“It would take a lot for someone to come in and be able to raise that bar,” he explained. “I’m so happy where I am that I just feel, like, I don’t want somebody who could possibly take that down.”

Blake Moynes Struck Out Three Times on ‘The Bachelorette’ 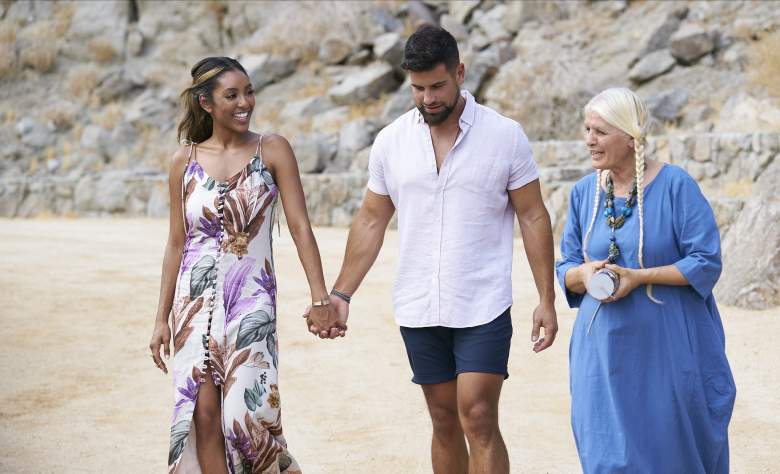 ABCTayshia Adams and Blake Moynes during a one-on-one date on The Bachelorette.

It’s no wonder Moynes is taking things slow. He has courted three different women on two seasons of “The Bachelorette” and is still single. His journey started on Clare Crawley’s season of “The Bachelorette” in 2020, but she cut her journey short after falling in love with Dale Moss within the first two weeks.

Moynes stayed around to date Crawley’s replacement, Tayshia Adams, but she eliminated him in Week 9. He made it all the way to the final rose on Thurston’s season in 2022, but three months after the show aired, they were done.

On the “Talking It Out With Bachelor Nation” podcast, Moynes admitted he felt “stupid and foolish” once he found out about Thurston’s relationship with Hersey, and he also wondered if he was partially to blame for her “emotional cheating.”

“I just have so many things I’m trying to figure out why it went wrong and why it transitioned so quickly into a new relationship,” he said.

Loading more stories
wpDiscuz
0
0
Would love your thoughts, please comment.x
()
x
| Reply
'The Bachelorette' alum reveals if he has been dating.