Chris Harrison is starting his new life – with a wife.

Shortly after scrubbing his Instagram account of all of his past photos, the former “Bachelor” host revealed that he is engaged to his longtime girlfriend, Lauren Zima.

In the first new post shared to his bare social media page on October 25, 2021, Harrison was pictured down on one knee as he proposed to the entertainment reporter while they were visiting the Brand Vineyard in Napa Valley, California. There were no roses in sight, but plenty of gorgeous views for the TV host’s proposal.

“I love you @laurenzima The next chapter starts now!” Harrison captioned the pic.

A second photo showed Zima looking at her ring, and a third pic showed the newly engaged couple toasting with glasses of champagne.

Harrison, 50, and Zima, 33, have been dating for three years, according to Us Weekly.

The Bride-to-Be Also Shared the Photos

Zima also shared the engagement photos on her Instagram page, and she tagged her ring from McClave Jewelers in Thousand Oaks, California.

“We tell each other this all the time, and we said it again in an unforgettably beautiful moment this weekend: I didn’t know love could be like this,” Zima wrote of Harrison. “You are the most incredible partner. Thank you for loving me, championing me and asking me to marry you. Here’s to the next amazing chapter, and all the rest.”

Both Harrison and Zima have been married before. “The Bachelor” host was married to his college sweetheart, Gwen, for 19 years and had two children with her, according to The Sun.

Zima and her first husband,  Charles McKeague, split in 2018, per Life & Style.

Friends From Bachelor Nation Reacted to the Couple’s Engagement 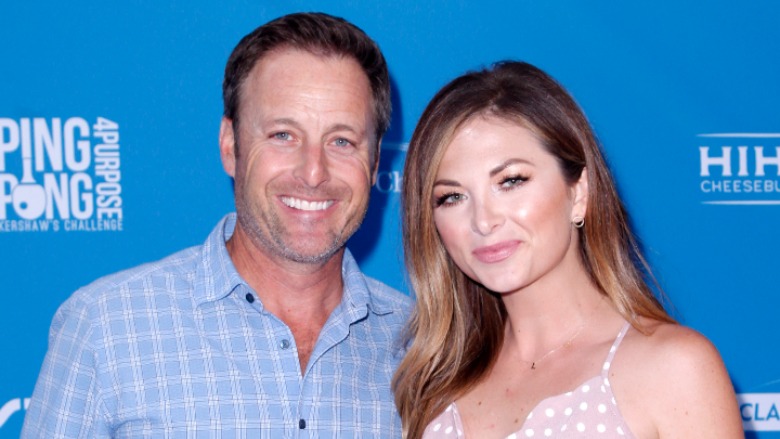 Harrison witnessed plenty of engagements during his nearly 20-year run as the resident rose master on “The Bachelor” franchise, so it’s no surprise that stars from the show – including two currently engaged former “Bachelorette” stars — reacted to Harrison’s own engagement news.

“Oh my goodnessssssssssss congratulations you two. This is perfect,” added Kaitlyn Bristowe.

In April 2021, Harrison and Zima sparked marriage rumors when they got dressed up in formal attire for a friend’s wedding and posted photos to social media that left some fans thinking they had gotten hitched on the sly. The two set the record straight on their relationship status, but Harrison told People that his romance with his girlfriend kept getting better.

“It’s been easy and I think that’s how it all starts,” he said. “We started dating and, like any relationship, she made me happy. She was kind, nice, we got along, she blended in great with my friends, and just all those steps in the relationship where you start checking those boxes off and it gets better and better and better.”