Chris Harrison is missing interacting with fans from “The Bachelor” franchise.

Nearly two months after he announced his exit from the ABC dating franchise amid controversy over comments he made about “Bachelor” contestant Rachael Kirkconnell’s past attendance at an Old South party, the longtime host responded to fans on social media after they said they miss seeing him on TV.

When one viewer wrote, “You think @chrisbharrison misses us as much as we miss him?” Harrison responded, “I truly do!”

Harrison also replied to a viewer from Canada who wrote, “I miss @chrisbharrison. The shows just aren’t the same.”

“Miss you all too,” Harrison wrote. “So many loyal fans up in Canada. Thank you!”

And when another fan expressed love for the former “Bachelor” franchise host, Harrison replied with, “Love all of you too. Always have, always will!!”

You can see Harrison’s tweets below:

I truly do! RT @taysmitty5: You think @chrisbharrison misses us as much as we miss him? #TheBachelorette

Miss you all too. So many loyal fans up in Canada. Thank you! RT @MichaelLipka: I miss @chrisbharrison. The shows just aren't the same. @ABCNetwork #thebachelorette

Love all of you too. Always have, always will! RT @hotpotato01: @chrisbharrison @MichaelLipka @ABCNetwork Love you Chris!!!! Miss you.

The tweets mark Harrison’s first Twitter activity since February 10, when he posted an apology to his Bachelor Nation “family” for his remarks during an Extra interview about Kirkconnell.

Harrison was supposed to be temporarily replaced by former “Bachelorette” stars Kaitlyn Bristwe and Tayshia Adams for the current season of “The Bachelorette” starring Katie Thurston as he took some time away following the Kirkconnell controversy, but in June he announced his official departure from the franchise he has hosted since 2002.

In a lengthy Instagram post, Harrison noted his “incredible run” as host of The Bachelor franchise and revealed he was “excited to start a new chapter.“

“It will never be the same. Truly the end of an era,” wrote Bachelor in Paradise alum Ashley Iaconetti. “Thank you for all the years of hard work and love you put into the show. … Can’t wait to see your next move. I love you.”

“You are truly irreplaceable as a host,” added Bristowe. “Thank you for all the years you put into this show and making it what it is. No one does it quite like Mr. Chris Harrison.

“It will never be the same,” wrote “Bachelor” star Sean Lowe. ‘”Love you buddy.”

“You are incredible Harrison,” she wrote. “What a loss for the show. Many people won’t be watching anymore. Myself included. One thing I know is that you will rise above all of this! Can’t wait to see what is next for you!”

There Have Been Rumors That Harrison Will Host a New Show 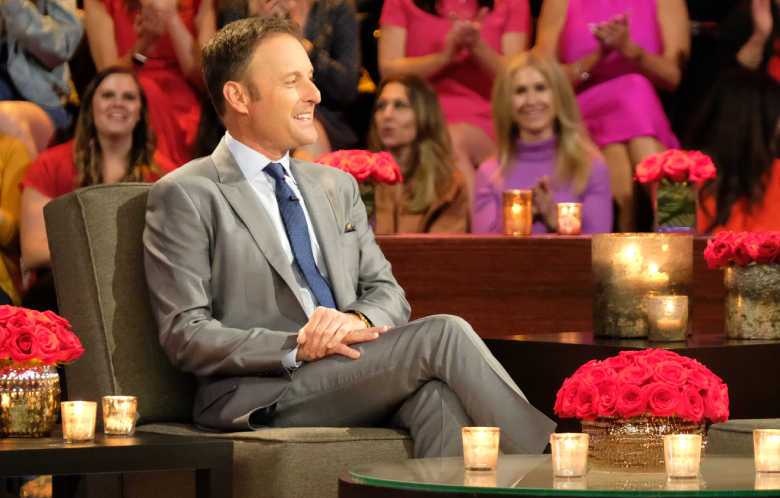 While Harrison has yet to confirm his next move, his recent social media activity could signal that he’s ready to make a comeback into the public eye. Over the past two months, many rumors have surfaced about Harrison’s future career.

An insider recently told OK magazine that the longtime TV host must wait out legal requirements following his departure deal with ABC, but that he plans to return to television full force, possibly as the host of a rival dating show.

“He’s taking a year off, but as soon as his non-compete expires, he’ll be back on another channel,” an insider told the outlet.