ABC Katie Thurston of The Bachelorette.

Katie Thurston made a stunning debut as “The Bachelorette” when she wore a gorgeous coral,  embellished Randi Rahm gown on her opening night, but has her style downhill ever since that glamorous show opener?

The 30-year-old bank marketing manager has actually been under fire by fans ever since she donned a Disney-style purple gown for the first promo for the new “Bachelorette” season, but she recently issued a response to her critics to let them know what matters most to her. 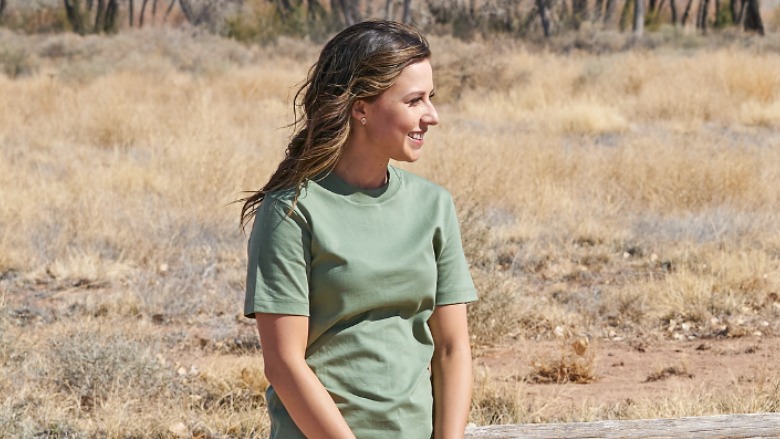 On the most recent episode of the ABC dating show, Thurston wore blue jeans and a plain green t-shirt for an especially casual date with frontrunner Greg Grippo. In the comments section to a photo from the date posted on the official “Bachelor Nation” Instagram page,  viewers slammed the look.

“This is the Bachelorette, I expect better styling c’mon now,” one viewer wrote.

“Someone get this girl a stylist,” another added.

“Fire Cary,” another wrote in reference to longtime Bachelor Nation stylist, Cary Fetman. “Put this girl in some better outfits.”

When one fan asked, “What is this outfit omg,” another replied. “Every single outfit of the whole season… who is styling this woman? Did the stylist quit bc Chris [Harrison] too?

Others noted that Thurston is “too pretty to just be wearing that,” with some adding that she looked like she was running errands or wearing a “‘Sears catalog outfit.”

Thurston Fired Back at Critics of Her Clothes

Thurston was well prepared for the unsolicited fashion advice. She proudly shared a photo of the look on her Twitter page with the caption, “Skinny jeans and side part. Come for me Gen Z. #TheBachelorette.”

“The Bachelorette” star also retweeted a post from the official Hanes Twitter page that said, “And with a plain t-shirt to top it off? Iconic.”

“Comfort is #1,” Thurston replied to the t-shirt company’s post.

And with a plain t-shirt to top it off? 👀 Iconic.🌹 #TheBachelorette https://t.co/1FQbBpoZfq

This isn’t the first time Thurston has fired back at fashion snobs.  She previously vowed to block anyone who messages her about how she parts her hair or what she wears on the show.

“I’m creating a new rule for myself,” Thurston wrote on Instagram Stories in June 2021, per Us Weekly. “Anyone who wants to message me about my part, or my fashion or lack thereof, I’m just gonna block you.

She added that she’s “just your basic f**king girl who somehow become a Bachelorette.”

“I’ve said it before, and I’m gonna say it again: It’s not about the wrapping paper, it’s the gift inside, Thurston added. “And that’s what I am — a f**king gift. So [my clothing] doesn’t matter.”

Many fans agree. While she did receive criticism for her dressed-down “Bachelorette” look, many viewers also defended the ABC reality star and praised her for being real.

“This is exactly why Katie is the best,” one viewer wrote. “When have you ever seen a Bachelorette dress like a normal girl and not always glammed up? She’s staying true to herself and she is beautiful. I’m here for it. “