More controversy surrounding a current Bachelor frontrunner has surfaced, and fans are saying that she’s “done” with the latest discovery.

On Friday, February 5, a Reddit user uploaded a couple of photos to the platform, alleging that Rachael Kirkconnell attended an “Old South” formal back in 2018. The event is described as an “antebellum plantation-themed ball.”

The formal was an event arranged by the fraternity Kappa Alpha. In October 2020, the New York Times published a feature about the fraternity, which has been called out as racist for years. Kappa Alpha is known to hold “Old South Week” each year. The tradition ends with the Old South Ball.

“The Old South Ball and/or Dixie Ball has evolved since 1920 as a traditional social function of the Active Chapters of the Order with the purpose to celebrate and to perpetuate the social attributes of courtesy, graciousness, and open hospitality, which are values of the Old South and were prominent in Virginia when (the) Order was founded in 1865,” according to Kappa Alpha Law R16-113, Section B, the Jackson Free Press reported in 2014.

Kirkconnell appears to have attended the ball in 2018, which would have been her senior year of college. A woman who looks nearly identical to Kirkconnell appears in two photos from the event: a selfie with two other friends, and a group photo in which the woman is seen in a pink hoop skirt dress. You can see the photos here.

After looking at the photos and reading up on the Kappa Alpha formal event, several social media users have said that they believe Kirkconnell is “done.” To some, that could mean that she’s going to lose popularity, become a victim of cancel culture, or even lose her boyfriend (spoiler: Matt James chooses her in the end).

“She’s gonna have to come out and address this sooner or later! She is DONE,” wrote one Reddit user.

“There is no coming back from this…SHE IS DONE,” added another.

“Damn I really loved their connection on this weeks episode and completely forgot how s***** she was,” a third person wrote.

The “Old South” controversy isn’t the first time that Kirkconnell has been accused of racist or insensitive behavior.

As previously reported by Heavy, a woman who claimed to be a classmate of Kirkconnell uploaded a video to TikTok and accused Kirkconnell of ridiculing her “for liking black guys” back when they were in high school. 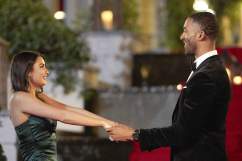 Rachael Kirkconnell of ‘The Bachelor’ Accused of Past Racist Behavior

Not long after, Reddit users were on the case. Screenshots posted by Reddit users appear to show that Kirkconnell previously liked controversial posts on social media. One of those posts showed two women posing in front of a Confederate flag. In another screenshot, a woman who looks like Kirkconnell was seen posing in a Native American-themed costume.

Rachael Kirkconnell Hasn’t Spoken Out, but Matt James Has

Rachael Kirkconnell has not spoken out about the accusations. She has yet to release a statement of any kind, which is something that fans of The Bachelor have been confused about.

There are some rumors that producers may be keeping her quiet, but social media users are getting impatient waiting for an explanation, apology or ownership.

Matt James, however, has been asked about the controversy surrounding Kirkconnell, whom Reality Steve confirms James is still dating — the two did not get engaged on the finale of the show. 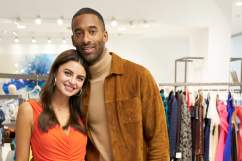 “You have to be very careful with what you’re doing on social media,” James said. “And I think that a lot of times, kind of what we dealt with last night, is you hear something on the internet and it’s fact. So I would just warn people to be careful about making accusations before someone’s had a chance to speak on it,” James told Entertainment Tonight.

“I would give people the benefit of the doubt and hopefully, she’ll have her time to speak on that,” he added. You can watch the full interview in the video above.

READ NEXT: Rachael Kirkconnell on ‘The Bachelor’: 5 Fast Facts You Need to Know

Loading more stories
wpDiscuz
0
0
Would love your thoughts, please comment.x
()
x
| Reply
This 'Bachelor' frontrunner is being accused of attending the "Old South" ball back in 2018.