Paparazzi recently captured “The Bachelor” villain Corinne Olympios and “Kardashians” veteran Scott Disick together after a late night out at a Miami restaurant. Speculation about a romance involving Scott and Corinne started immediately, and now a source has emerged trying to diffuse the dating rumors. Whether there is more to this, though, remains to be seen.

Corinne and Scott Were Both Hanging out With Friends

According to a source for Us Weekly, Scott was in Miami for the Grand Prix event during the weekend of May 7, and Corinne lives in Miami. Photographers spotted Scott and Corinne leaving Papi Steak at about 2 a.m., and the two got into the same car as one another. Corinne sat in the back, while Scott took the front passenger seat. The outlet’s source noted, “Papi Steak was open to the public and had special events this past weekend surrounding the Grand Prix.” Scott and Corinne were apparently just two of many celebrities who stopped by throughout the weekend. The outlet’s insider shared, “Nothing serious is going on between Corinne and Scott.”

Not only do Corinne and Scott hang out with some of the same people, but “he’s actually known her for quite a while,” a Hollywood Life insider explained. This source also dismissed the idea of a romance brewing between the two reality television stars. “There’s nothing going on between them.” Will these insider denials be enough to put a stop to the rumors and speculation? Even if Scott and Corinne aren’t dating, it seems some “Bachelor Nation” fans might root for it to happen, anyway. As one Reddit poster noted, “This would be the most funny chaotic couple ever.” 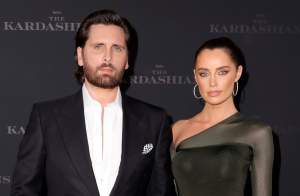 The insider for Hollywood Life also noted Scott is “still with Rebecca and very focused on impressing her.” Scott and model Rebecca Donaldson made their public debut as a couple in April when she joined him on the red carpet for the new Kardashian show on Hulu, detailed E! Online. Scott and Rebecca have been spotted in Miami together more recently, and it seems the romance between the reality television star and the model continues to build. “Scott seems to be really into Rebecca and everyone in the [Kardashian] family is hoping it will last,” the Hollywood Life source detailed.

The family is said to be eager to see Scott move on from his former relationship with Kourtney Kardashian, although the two continue to co-parent their three children together. “At this point everyone’s just really encouraging him to make this relationship work because Rebecca seems to be doing him a lot of good.” Did Scott’s late-night restaurant departure with Corinne cause any drama in his relationship with his model girlfriend? “The Bachelor” fans will keep an eye out for additional sightings of Scott and Corinne in the days ahead to see if anything more serious develops.

Loading more stories
wpDiscuz
0
0
Would love your thoughts, please comment.x
()
x
| Reply
Despite being spotted together in Miami, insiders say Scott Disick and Corinne Olympios are not dating.