There continues to be fallout among Bachelor Nation as Taylor Nolan issues her third statement, apologizing for her past social media activity.

Reddit users have unearthed old tweets and Facebook posts, from 2011 through 2014, that are being deemed racist, ableist, sexist, homophobic, fatphobic and antisemitic. These posts came as a shock to many since Nolan has long been on the forefront of racial issues in Bachelor Nation and vocal about her desire for host Chris Harrison to be permanently removed after “excusing historical racism.”

“Yesterday’s response was a reaction and not an apology,” she wrote in her latest statement on Instagram. “I’m sorry I didn’t take a second to come correct. I owe you all an apology.”

She has issued two previous statements, both blaming critics who opposed how vocal she is about politics and issues of race in Bachelor Nation for resurfacing them. Later acknowledging she had not seen the full breadth of the resurfaced posts, her initial statement was a since-deleted video addressing only communities of color. She explained how her own internalized racism from white supremacy caused her to perpetuate those views to create a “false sense of safety.”

Nolan referred to her tweets as, “harmful, wrong, triggering, and incredibly upsetting to the communities that I identify with and that I support.”

Bachelor Nation Stars Are Still Speaking out, Questioning the Sincerity of a Third Apology

I don’t get offended by much. Those tweets are hurtful to numerous groups of people. Including harmful, racist remarks I’ve heard my entire life. I’m sorry but there absolutely needs to be accountability taken here.

Still, for some, it seems the statements are too little, too late. Bekah Martinez has been among the people speaking out against not only the posts but Nolan’s reaction, admitting she feels “bamboozled.”

“Taylor, it’s hard to accept this apology after seeing what appeared to be your true feelings in your reaction yesterday,” she commented in part on Nolan’s latest post. “It’s really disappointing to see how your apology has missed the mark of so many of the standards you’ve held everyone else to. Even now, the emphasis on the number of years remains. I really hope you can take the time to unpack your reactions from yesterday because they really made me and other people feel like we can’t trust you.”

It seems to be a consensus among many alums, such as Ashley Spivey and Kaitlyn Bristowe, that it is shocking Nolan is at the center of this controversy.

“I’m not going to come on here and be like, ‘I’m going to do better.’ I’ve been doing better,” Nolan said in her initial video, which has since been deleted.

“I’m shocked that it’s Taylor Nolan because, you know, she talks about being an ally and how she’s done all this work,” said the former Bachelorette on her Instagram Story shortly after Nolan’s third apology. “Which I’m not discrediting that she’s done all the work, but to use that as an excuse by saying you’ve done the work that’s dismissing what you said. That’s dismissing those people you’ve offended.”

The former Bachelorette also addressed Nolan’s insistence she purposefully left these posts up, saying, “Please delete them. They’re still offensive even if it’s a part of your journey.”

The statements continue to come in of people condemning Nolan’s past tweets, including those from Bryan Abasolo, Olivia Caridi, Tammy Ly, Danielle Maltby, Vanessa Grimaldi, Onyeka Ehie and Jubilee Sharpe.

Chris Randone Addresses the Steps She Needs to Take 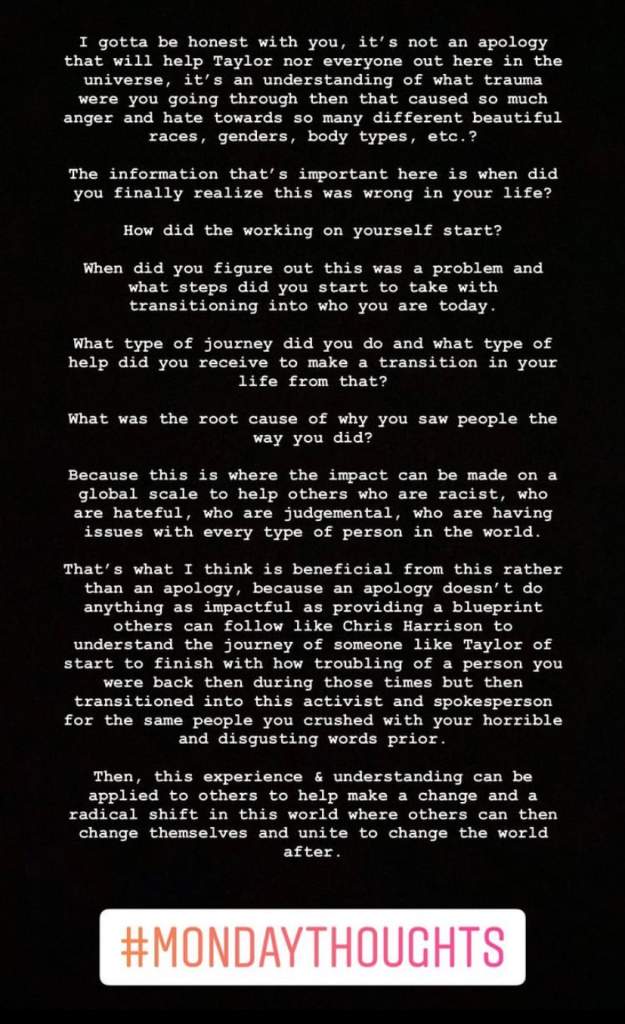 For Chris Randone, an apology is not the true fix. Rather, it is seeing her express how she has done the work she references.

“How did the working on yourself start?” he wrote in part on his Instagram Story. “When did you figure out this was a problem and what steps did you start to take with transitioning into who you are today.”

Nolan has promised in a video on her Instagram Story to address and unpack everything in more depth.

READ NEXT: Chris Harrison’s Replacement Announced for ‘Bachelor’ After the Final Rose Special

Loading more stories
wpDiscuz
0
0
Would love your thoughts, please comment.x
()
x
| Reply
Former ‘Bachelor’ contestant Taylor Nolan is addressing her past tweets for the third time as franchise stars are speaking out against the ‘harmful’ words.