Fans of “The Bachelorette” are questioning what Tayshia Adams and Kaitlyn Bristowe’s roles on the show really are — and if they are being paid fairly.

In September, Variety reported that former franchise lead Jesse Palmer will have a “host” title as he helms the upcoming 36th season of “The Bachelor” in place of departing host Chris Harrison.

But in a Reddit thread, eagle-eyed fans noticed that Kaitlyn and Tayshia are both listed as “special guest” in the ending credits to Michelle Young’s season of the ABC dating show.

“Chris Harrison got the ‘Hosted By’ credit during his time hosting (checked the first episode of Rachel’s season) but Tayshia Adams and Kaitlyn Bristowe are reduced down to ‘Special Guest’ as the hosts of Michelle’s season. Grrrrrrr,” the original commenter wrote.

Other fans were upset by the revelation.

“They had no problem making Jesse Palmer ‘host’ of bachelor right away… so it seems really unfair that they haven’t made Kaitlyn and Tayisha host,” one fan replied on Reddit. “The difference between CH and them hosting is really palpable in both seasons so far. The way they connect with the leads and the fun and empathy they bring to the show. CH could never. I haven’t missed him for one instant. It just feels super sexist honestly.”

“Now we know they aren’t being paid fairly,” another fan agreed.

Harrison was the lone host of the franchise for nearly 20 years. When Emmanuel Acho became the first fill-in emcee for the “After the Final Rose” special following Harrison’s leave from the franchise, he was given a “host” title, according to IMDb. 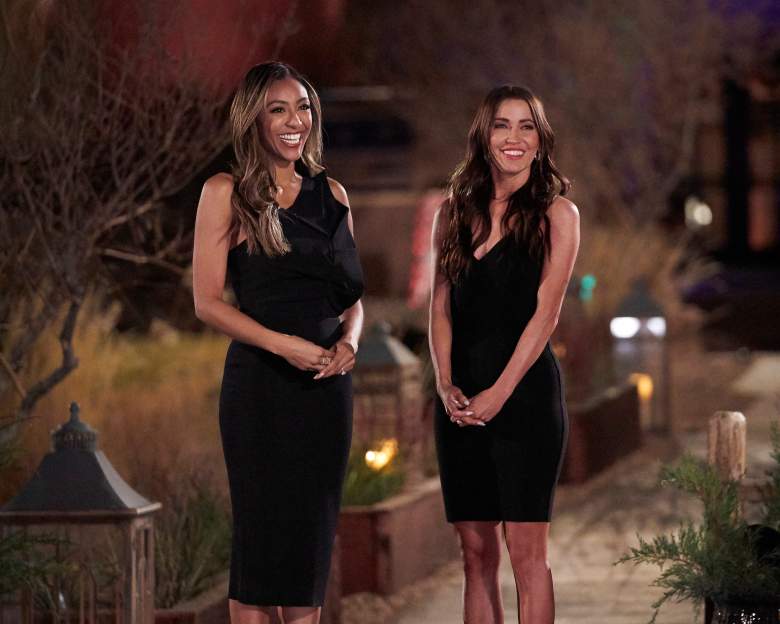 On the “Behind the Rose” podcast, franchise alum Blake Horstmann and his co-host Erik Bradley gave some insight into the title confusion. On the podcast, Blake noted that Kaitlyn and Tayshia regularly advise “The Bachelorette” and are in more of a mentoring role than the former host.

“I like that dynamic,” Blake said. “I know that Chris did that a little bit…but it seems like every episode they’re having [conversations with the Bachelorette].”

“Kaitlyn, and Tayshia too, they are great in this kind of mentor role they’ve kind of found themselves in,” he continued. “They do a great job and it’s helping the lead.”

“But they are not the hosts….” Erik clarified.

“Because then they would have to pay them the host salary,” Blake added. “So they are not hosts. They are mentors.”

According to Celebrity Net Worth, former Host Chris Harrison earned $8 million per year for his hosting duties on the ABC franchise. But Cosmopolitan pointed out that Harrison also hosted three shows per year: “The Bachelor,” “The Bachelorette,” and “Bachelor in Paradise,” making his average paycheck $2.6 million per season. The outlet noted that the OG rose master was also in the role since 2001, which means he negotiated his contract multiple times over the years.

When Kaitlyn and Tayshia were announced as the new duo for “The Bachelorette,” Variety did not reveal the “special guests’” salaries, but it was revealed that both of their contracts included “multi-year options.”

Kaitlyn & Tayshia have Described Themselves as Mentors on the Show 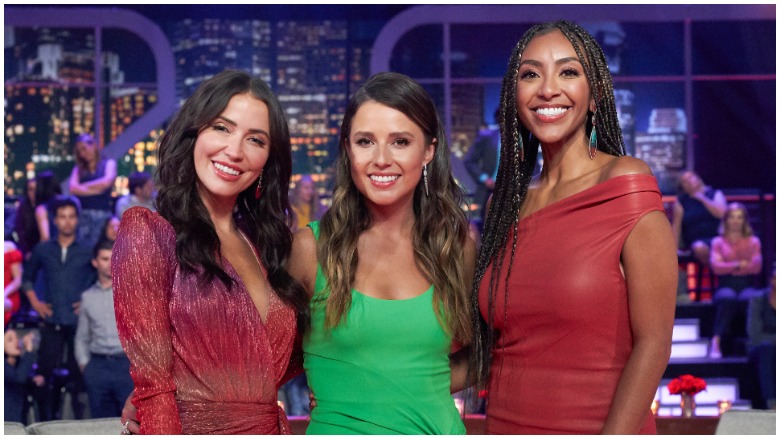 Kaitlyn and Tayshia have embraced their roles as mentors. In an interview with the Washington Post, Tayshia reflected on the duo’s first season alongside “Bachelorette” Katie Thurston.

“For Katie, we’re mentors,” she said. “We were just standing by her side and helping her navigate through these waters of being the Bachelorette, which are difficult waters to be in.”

“We were a shoulder to cry on, we were there to laugh,” Kaitlyn added. “We’re there to keep extra eyes on some of the guys. And it’s definitely different because we’ve been in this position before.”

During an appearance on the “Bachelor Happy Hour” podcast in June 2021, Kaitlyn said it “was really nice to be there as a mentor and support system” for Katie.