ABC Tino Franco's dad has been rooting for him.

On the Monday, August 22, 2022, episode of “The Bachelorette” Recchia and Gabby Windey started their Hometown Dates journey, heading out to meet the families of the guys they’re most into. While many of the dates went great, there were a couple that didn’t go so well. For starters, Recchia didn’t even make it to Tyler Norris’ house.

After spending a bit of time with Norris, Recchia realized that she just didn’t have those strong romantic feelings for him and she was worried that she wouldn’t get there with her other relationships so far advanced. She broke things off with Norris before even meeting his family because she knew it was the right thing to do.

After that, Recchia linked up with her frontrunner — and first impression rose recipient — Franco. Upon meeting his family — especially his dad, Joe Franco — however, Recchia was feeling far less warm and fuzzy.

While it didn’t seem like Joe understood the process of the show and couldn’t fathom how his son could possibly have strong enough feelings for a woman to the point that he was ready to propose after “five weeks,” his Facebook status updates paint a different picture.

In fact, before Hometowns, Joe was “#TeamTino” and seemed to be in complete support of his son going on the show, the premise of which he seemed to understand on some level.

“OK, it’s true. Our oldest son is on the Bachelorette, and got the ‘first impression rose’ whatever that is. Never have seen the show, but watched the premiere Monday. Sam Rubin of KTLA 5 ripped everyone on the show to shreds but he doesn’t know a thing about Tino… Not sure how we feel about the idea of finding your soul mate on TV and Sam’s right, it’s a bit cheesy, but nothing wrong with a little fun — It’s not 60 Minutes. Let’s hope Tino doesn’t bring shame on the name, and above all, he may not be welcomed back home if he cries on the show! But we love him anyway,” Joe wrote on Facebook on July 11, 2022.

“Bachelorette Update: Week 2 and our son Tino is still alive and received another. If you barely saw him on this week’s episode, it wasn’t because you nodded off. A friend shared this graphic: Looks like a piece of luggage received more screen time than Tino! (Zoom in — What nerd keeps these stats?) At least he didn’t do a handstand in his speedo,” he posted on July 20, 2022. He shared a visual from bachelordata’s Instagram that depicted the amount of time that Tino got on screen during that episode.

Joe hasn’t shared any “Bachelorette” updates publicly on Facebook since. However, he did write a comment to someone in which he said, “So true, fun to see how this plays out. Not sure there is a way out of this for Tino. Hope it is a cool adventure…” 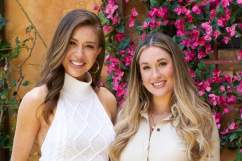 ‘Bachelorette’ Finale Spoilers Reveal Who Is Engaged & Who Isn’t

Shortly after the episode aired, “Bachelorette” fans took to social media in hopes of sending Recchia a warning: “Run, Rachel!”

Many viewers weren’t too fond of how Tino’s mom and dad were so skeptical of the whole process to the point that they came off mean. In fact, during the episode, Recchia stated more than once that she felt like Tino’s parents didn’t like her at all.

“Tino’s family sucked. His mom looked like she was coming off a huge bender. His dad had little man syndrome. The brother didn’t even speak. S***** personalities all around in that family,” one person commented on a Reddit thread about that particular Hometown Date.

“Imagine these people as your in laws. They would always be horrible to you about something…whether it’s choices with your kids, belongings whatever. They were both a bunch of smug aholes,” someone else wrote.

“I feel like at this point if the relationship fails, it’s absolutely this guy’s fault,” a third Redditor added.