ABC The logo for Dancing With the Stars

Audrina Patridge was one of the most promising contestants in the 11th season of Dancing With the Stars.

The Hills star was partnered with Tony Dovolani and seemed to be headed for the finals on the ABC celebrity ballroom show, but she was prematurely voted off in the sixth week of the competition.

Audrina went out on a high note, scoring an impressive 32 points for her final routine and landing at the top of the leaderboard for that week. Even the judges were confused as to why she was sent home because she had been a major contender for the mirrorball trophy.

“We were baffled Monday night after what the judges said,” Audrina told Good Morning America the day after her elimination. “I still don’t understand. I’m really sad to be off the show.”

But Audrina, Tony, and the judges weren’t the only people baffled by the turn of events. Following the live show, Audrina’s mom, Lynn, had some choice words about the ABC dance-off – and The Hills.

Audrina Patridge's Mom Delivers Inspired, Well-Lubricated Monologue at BesoA highly inebriated Mrs. Patridge dished out some frank verse last night in front of Beso and spilling the beans to some juicy deets on her daughter, Audrina: she's a Polish Catholic f*ckingfull-on Italian who's strong and going on through her next open door. She smashes Lauren Conrad's "fashion sh*t" and tells a passing stranger…2010-10-27T13:35:21Z

The night after the show, Audrina’s mom was caught by paparazzi outside of the Hollywood eatery, Beso, after drinking, and she used the opportunity to give unleash true feelings on her daughter’s DWTS elimination as well as her former co-stars on The Hills.

According to People, Lynn went on an obscenity-laced rant as paparazzi cameras rolled as she claimed that Audrina was going to “rise” past DWTS and The Hills.

“I’ve been a celebrity mom for eight years through this Hills” bull—,” she said, “but Audrina is going to the next level… She’s got it in her. …Last night, she f––g kicked a– . . . It’s all show business, baby, the show must go on.”

Lynn was also asked about the “Hills girls” Audrina co-starred with on the MTV reality show. She called them “Hills tramps” and called series star Lauren Conrad  a “b––.”

She also called LC’s clothing line “pissy a– little fashion s—t,”  according to Us Weekly. 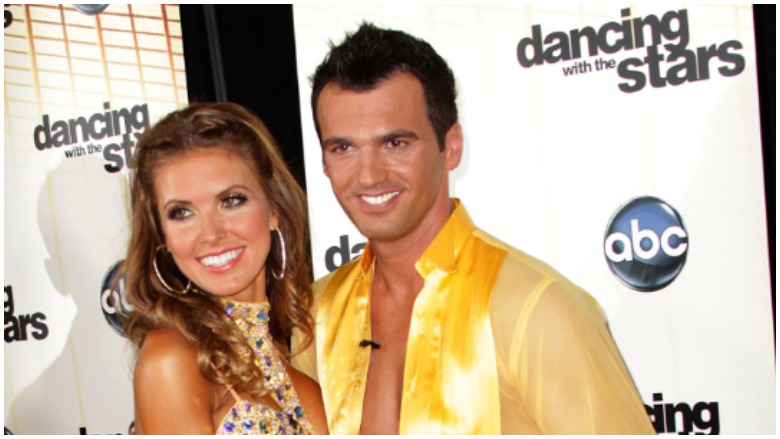 GettyAudrina Patridge (L) and Tony Dovolani attend the premiere of “Dancing With The Stars” at CBS Television City on September 20, 2010 in Los Angeles, California

After the video went viral, Audrina’s mom backtracked and offered an apology to the Dancing With the Stars team as well as her daughter’s former friend.

In a statement to Ok magazine, Lynn admitted she was simply emotional about the Dancing With the Stars elimination and spoke without thinking.

“I am sincerely sorry for the negative things I said in the heat of the moment,” she told the outlet. “As a mother, there is no pain in this world like seeing your children upset. I am so proud of my daughter and all she has accomplished on Dancing with the Stars. I was extremely emotional after her elimination — it just came as such a shock. I want to apologize for offending anyone.”

Audrina also addressed the incident on her self-titled reality show.

Not long after, Lauren was asked about Ayudrian’s mom’s comments about her, buts she chose to take the high road, according to Reality Tea.

“I really don’t have a comment on that right now, thanks,” she said

Audrina, who met Lauren in 2006 when she joined The Hills,  hasn’t been seen in public with her former roommate since the show’s wrap party in 2010.

Read More
Audrina Patridge, Celebrities, Dancing With The Stars, Lauren Conrad, Reality TV, The Hills, TV
'The Hills' star's mother lashed out when her daughter was sent home on 'Dancing with the Stars.'