Bravo/Getty Madison LeCroy in a screengrab; Pamela Anderson on the beach.

Madison LeCroy is turning up the heat with the  Jay Cutler drama.

After she exposed a lengthy text thread she claimed to have with the former Bears quarterback, the Southern Charm star posted several sassy Instagram posts while lounging on the beach.

“Unbothered,” she captioned a bikini pic.

“Blocking more than the sun,” she wrote below another swimsuit pose.

The posts came just as LeCroy leaked “receipts” of her relationship with Cutler months after his split from wife Kristin Cavallari.

“I came into this honestly with good intentions,” LeCroy wrote to the dad of three. “I want no part of being involved in a payback or drama. But you initiated and pursued. If you weren’t interested in something real you shouldn’t have [redacted] with me.”

Eagle-eyed followers believe the blocked out word was “slept.”

LeCroy Compared Herself to Pamela Anderson in a Shady Post

While LeCroy already showed off her texts as well as a photo she posed for with Cutler, she could be hinting that she has more to share.

Her most recent Instagram post featured her on the beach posing in a red bikini on an ATV.

“What Would Pamela Anderson Do?” she captioned the snap.

LeCroy’s thirsty post received a ton of comments as followers reacted to her red swimsuit and comparison to the Baywatch bombshell.

But others slammed the Southern Charm star. When asked what Pamela Anderson would do, one commenter wrote, “Probs not blast private texts.”

“Pam would’ve gone to Nashville. Not waited for Jay to come to her,” another wrote.

LeCroy responded, “I did go to Nashville.”

A third commenter chimed in: “She would release a ‘special’ tape of her and Cutler… too far?”

The former Baywatch star and her ex, Motley Crue drummer Tommy Lee, were famously involved in a sex tape scandal in 1995 after a video from their honeymoon was stolen from their home.

LeCroy has not implied that she has a tape of her alone time with Cutler. Her photo seems to be just a take on Anderson’s red Baywatch swimsuit.

Cutler Was Recently Spotted With a  Gorgeous Blonde in Miami 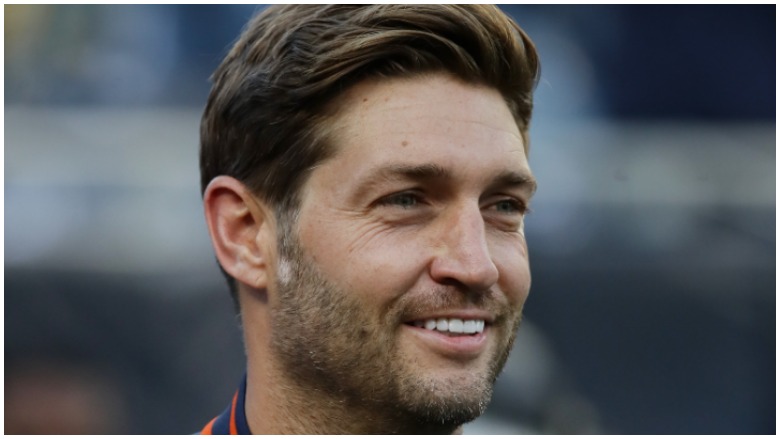 Days before the text drama played out, Cutler was photographed in Miami with a mystery blonde.

In photos posted by TMZ, the former NFL player was spotted talking to an unidentified blonde beauty while at the 1 Hotel in South Beach. The two were seen sitting poolside and chatting for several hours. A source told TMZ Cutler and his friends were hanging out at the rooftop pool before he went inside and returned with the pretty blonde and ordered drinks.

There was no “PDA,” TMZ reported, but the two seemed friendly and flirty, the source said. While TMZ reported that the woman “could be Madison LeCroy,” it does not look like her in the photos posted by the celebrity gossip outlet.

It’s unclear how much time LeCroy spent with Cutler if and when they were a thing. A source recently told People, “Jay reached out to Madison and they spent time together. She flew out to see him after filming the Southern Charm reunion last month.”

A separate insider told Us Weekly that the newly single stars had a “new, flirty thing going on” and were “having fun getting to know each other.”

But in LeCroy’s text purge, she captioned a photo of her and Cutler with, “Too bad it didn’t work out.”