Miley Cyrus started a “Free Britney” chant during her July 4 concert in Las Vegas, according to NME, and the crowd was right there to support Britney Spears’ pleas to remove her father from her conservatorship.

Spears has been under conservatorship since February 2008, according to Us Weekly. It wasn’t until last month that she — for the first time in her 13-year conservatorship — delivered a 24-minute testimony about the situation.

Since then, the #FreeBritney movement has gained even more momentum, with fans everywhere urging the court system to release Spears from her conservatorship and bring awareness to her legal position.

Cyrus Has Supported Spears for Years 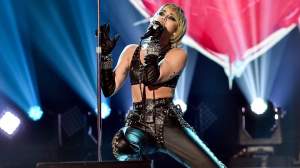 As pointed out by NME, Cyrus has been a vocal supporter of the #FreeBritney movement since 2019. She even expressed her love for Spears while performing at the Super Bowl alongside Joan Jett and Billy Idol earlier this year, NME reported.

What exactly does a conservatorship entail?

According to The New Yorker, a conservatorship is a “legal structure in which a person’s personal, economic, and legal decision-making power is ceded to others.”

BBC wrote, “[Spears’] has been in the hands of legal guardians in an arrangement known as a conservatorship since 2008 when she faced a public mental health crisis. The court-ordered agreement gave her father, Jamie Spears, control over her estate and other aspects of her life.”

The terms of Spears’ conservatorship were set to be discussed in court in late June.

Then, as pointed out by The New Yorker, on the day before the hearing, “Spears called 911 to report herself as a victim of conservatorship abuse.”

The outlet wrote, “Spears described how she had been isolated, medicated, financially exploited, and emotionally abused. She assigned harsh blame to the California legal system, which she said let it all happen. She added that she had tried to complain to the court before but had been ignored, which made her ‘feel like I was dead.’”

On June 30, a judge denied Spears’ plea to remove her father from his role as her sole conservator, according to Variety.

Other Celebs & the #FreeBritney Movement

A number of celebrities have vocalized support for Spears over the past few months.

In March, John Oliver stated on an episode of “Last Week Tonight With John Oliver,” seen above, “I cannot stress this enough: Leave Britney alone! Not only has she been through a lot, she’s a stone-cold legend. She’s the definitional diva of the 2000s. And I guarantee you, there is not a human being on Earth who doesn’t perk up when that violin hook from ‘Toxic’ comes on. … Put some motherf****** respect on her name.”

Will.i.am. has also stepped forward to discuss the subject.

Speaking to Metro on March 9, he shared, “The treatment of women goes way beyond the music industry. It’s society and the lack of true support and lifting up of the female. Britney has endured some pretty harsh treatment from her own, and she’s an amazing person, and her heart is pure… Everyone’s had some downfalls and some choices that they’ve made personally, but she’s awesome.”

Kim Kardashian also wrote on her Instagram story in March, per Us Weekly, writing, “So I finally watched the Britney Spears documentary this week and it made me feel a lot of empathy for her. No matter how public someone’s life may seem, no one deserves to be treated with such cruelty or judgment for entertainment.”

Discover more from Heavy on The Voice↓

Unlock the latest news, rumors and exclusives from The Voice — direct to your inbox. ↓