Getty Mike Myers (L) and Dana Carvey as Wayne and Garth from "Wayne's World" onstage during the 17th annual MTV Movie Awards held at the Gibson Amphitheater on June 1, 2008 in Universal City, California.

The stars of Wayne’s World reunited on the small screen for an “excellent” reason.

As Super Bowl LV featured a matchup between the Kansas City Chiefs, and the Tampa Bay Buccaneers, viewers who were more in tune with the commercials zeroed in on the reunion of Wayne’s World stars Mike Myers and Dana Carvey for an Uber Eats ad.

Here’s what you need to know about this “excellent” reunion:

In the ad, Myers and Carvey reprised their iconic 1990s roles as Wayne and Garth, respectively, as they sat in their familiar basement “studio” dressed in their bad grunge-era, headbanger wigs.

In the clip, seen above, the two stars poked fun at product-placement segment as they vowed that their fictional public-access-TV show would never stoop to such levels.

“As a local access show, we want everyone to support local restaurants,” Myers’ character said.

“But we’d never manipulate you the way all these other commercials do,” Carvey chimed in as an “EAT LOCAL” message flashed on the screen.

The duo then posed with baby versions of themselves and jumped on the TikTok trend as part of their gimmicky plug before breaking into the Wayne’s World theme song with Cardi B as an Uber Eats bag sat in the forefront.

The reunion of the famous characters was previously teased in a teaser for the Uber Eats spot as the two pals noted that 2020 was NOT a great year.

The two teased that they would see fans “soon” for “the big bowl,” which “for legal reasons cannot be named.”

The sneak peek ended with a doorbell ring and a shot of an Uber Eats delivery bag on the counter of the familiar hangout. 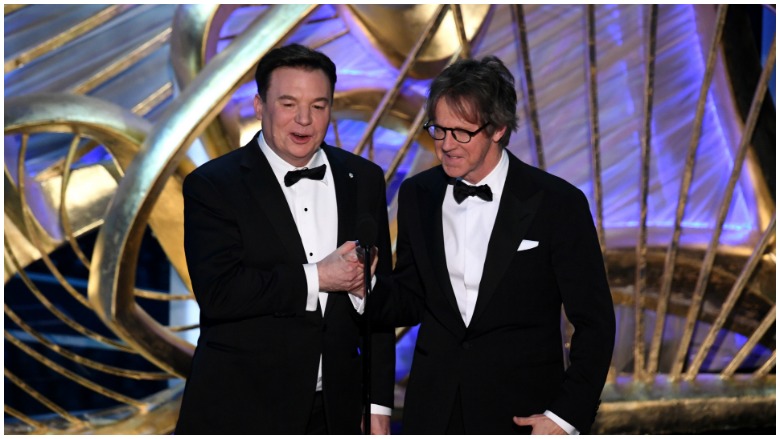 The Wayne’s World sketch was a recurring segment on Saturday Night Live starting in the late 1980s. The sketch centered on a public-access TV show in Aurora, Illinois hosted by diehard rock music fans Myers’ Wayne Campbell and Carvey’s Garth Algar.  The show, broadcast from Wayne’s parents’ basement was known for its “party time, excellent” theme song as Wayne played his guitar and Garth tapped drumsticks on his lap.

The first Wayne’s World was a massive hit. According to Rolling Stone, it is the only movie based on an SNL sketch to gross over $100,000,000 to date. Wayne’s World 2 earned an impressive $48 million.

Myers and Carvey have reprised their roles as Wayne and Garth a few times since their 1990s heyday as the characters. They appeared together on the 2008 MTV Video Music Awards as well as the Saturday Night Live 40th anniversary special in  2014. And last year, they reunited for a Zoom reunion hosted by Josh Gad and featuring other cast members and Aerosmith rockers Steven Tyler and Joe Perry, according to People.

As for the prospect of a Wayne’s World 3 ever hitting the big screen, Myers has not totally ruled it out.

In an interview with CTV News, Myers admitted that the concept of a third Wayne’s World movie would be “interesting.”

“It would be an interesting examination of Wayne at 50 I don’t know what it would look like, but the idea of it makes me laugh and Dana (Carvey) and I had a blast at the 40th anniversary, so I don’t know,” he said.