Drake Bell has changed his name to “Drake Campana” on his social media accounts, causing many to wonder why he changed his name. He also dropped new music where he sings fully in Spanish, adding to the confusion.

The former Nickelodeon actor has been singing music in Spanish since 2019. However, his name change has taken place more recently,

One fan provided a succinct explanation for why Bell’s social media accounts reflect such a shift from the comedian’s previous career: “Drake Bell trending because he changed his name to Drake Campana, moved to Mexico, and now only writes and sings Spanish songs because he’s apparently more popular there.” 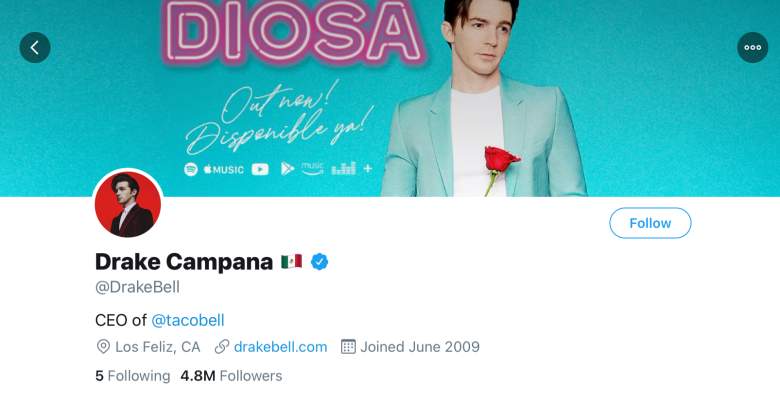 Though Bell has changed his social media accounts to “Drake Campana,” his last name is still visible in his profile, likely so he doesn’t have to create a new handle, thus requiring him to lose his existing following.

Bell has not given a public statement explaining the name change. He also hasn’t clarified if he made a legal name change as well, or if this is his new stage name.

Bell is not Mexican. He was born in Newport Beach, California, to parents Robin Dodson and Robert Bell. His last English language album was released in 2014, and received a poor reception. It sold 2,000 copies in the first week, according to Billboard 200.

The timeline for Bell’s shift to his new persona, “Drake Campana,” isn’t entirely clear. Bell’s social media reveals that he’s been singing and writing in Spanish publicly for over a year. However, he only started referencing himself as “Drake Campana” this November. His Instagram shows that he’s been referencing himself as Drake Bell as recently as a November 1 Instagram post.

Bell has indicated a general awareness of his shift in focus, though. In November 2019, Bell shared a viral meme, customized to his current situation. The meme seemed to indicate his own awareness of his shift from catering to American audiences, to catering to Mexican audiences. However, the meme did not have a caption, so he did not say this explicitly.

Bell Was Recently Accused of Abuse by His Ex-Girlfriend; He Has Denied the Claims She Made Against Him

In August, Bell’s ex-girlfriend Melissa Lingafelt went public with accusations that Bell was verbally and physically abuse during their relationship. The TikTok star, who goes by Jimi Ono, posted the accusations to her Instagram story.

Lingafelt and Bell dated from 2006-2009. In her TikTok video, she said in part, “I’d like to start out by saying, I don’t really care if anyone believes me, as this is my story and my life, and something that I went through. It wasn’t until recently that I actually realized that abuse isn’t something that all women have to go through.”

She continued, “I moved in with him, I was singing. It wasn’t until about a year when the verbal abuse started,” she said. “And when I say verbal abuse, imagine the worst type of verbal abuse you could ever imagine, and that was what I got. It then turned to physical — hitting, throwing, everything. At the pinnacle of it, he drug [sic] me down the stairs of our house on Los Feliz. My face hit every step on the way down. I have photos of this.”

In a statement to People Magazine, Bell said, “[I] never abused my ex-girlfriend or did so many of the other things Melissa falsely claimed on her TikTok video.”