A proper costume is a must for any college Halloween party, and you don’t always have to recycle the same old outfits you have over and over again.

Nobody expects you to have an unlimited budget for realistic suits, so you can get creative and combine more affordable elements of different costumes into something new and exciting.

Really, anything goes from longtime classics, to themes of debauchery or current affairs, to anything sexy. Check out some of our favorite college Halloween costumes below, and browse other Halloween ideas here. 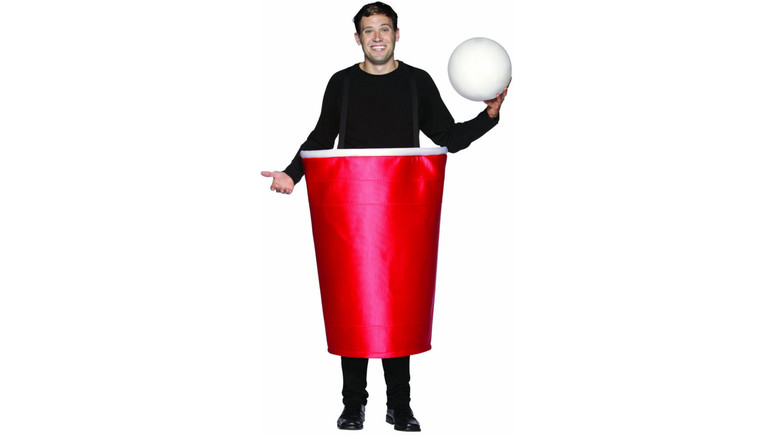 Those with partying on their mind will quickly liken to this costume, as it brings the fun vibes of a friendly drinking game even where none such games have sparked up yet. This costume comes with both the large wearable cup, and an inflatable ball to use with it. Wherever you choose to wear this, it will be sure to get the party started.

No matter which way you sway on the political spectrum, there’s no denying that billionaire President Donald Trump has become a staple college Halloween costume. If you are on a liberal campus, this costume might make for a cheap laugh, but then again, there is an equal chance that your school is also just trying to “Make America Great Again.”

Speaking of which, Trump’s classic head wear choice is a great addition to any Trump costume, even if you decide to go with a mask instead of a wig. This iconic hat allows for some fun and easy crossover costumes like Sexy Trump (pictured above), Sith Lord Trump, or whatever else you can dream up.

The One Night Stand is a puntastic classic that can be either made from a real nightstand, made with cardboard, or just bought as a premade costume.

The premade version includes a giant foam dresser and leopard print lamp shade hat, but this clever costume is all about the details though. Some versions include props like condoms or an alarm clock, but wearing just socks underneath is our favorite.

“Colt 45 and two Zig Zags, baby that’s all we need.” This classic Afroman tune is the perfect inspiration for a costume that can be as complicated as you want. You can go the easy route and buy the beer and papers at a gas station before you go out at night, or you can replace one or the other with a Colt 45 bottle costume, or a Zig Zag T-shirt.

You can even go all out and make it a group costume, decking out one Colt 45 and two Zig Zags each with matching afro wigs. But even if you go solo for this costume, know that when you sing the chorus, you’ll never have to do it alone.

Ah, the beer keg. A timeless icon of binge drinking, parties, and good ‘ol fashioned American excess. There a number of different iterations of this college Halloween costume, but no matter what, it’s always a crowd pleaser.

You have the option of a men’s or women’s design, or even a hat with beer goggles form. There are simply loads of ways to embody the graceful roundness of a beer keg. Just be wary of attempted keg stands. 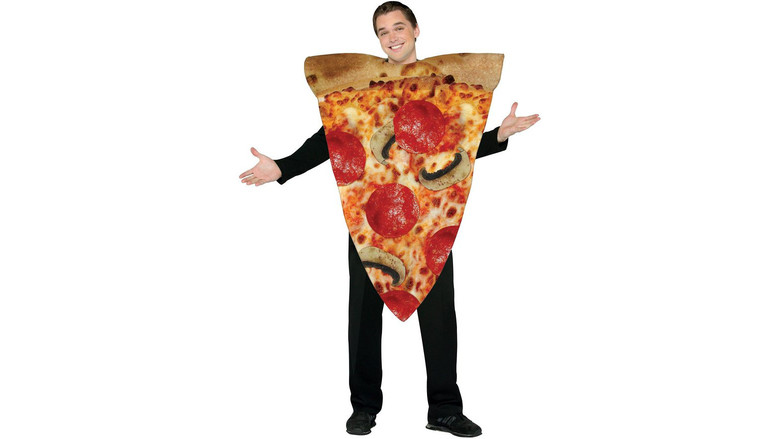 Everybody loves pizza, right? That’s exactly why this full-body Pizza costume is an instant win. Considering how few things out there are as universally loved as a cheesy slice of pizza, there is pretty much no reason to go with any other costume. Done and done. 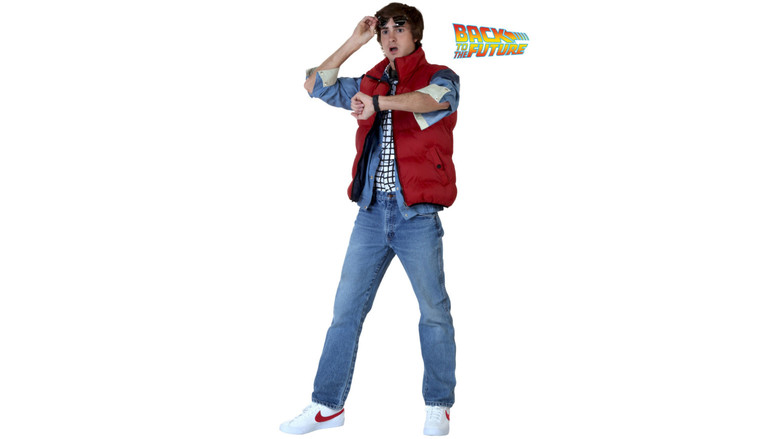 October 21st of 2017 marked a very special Back to the Future Day. As of that day, we are officially in the future according to this classic ’80s film.

The essential pieces for this outfit can easily be scrounged up at a thrift shop, or done in a no-hassle T-shirt costume if you are feeling uninspired to shop. Otherwise, all you need is a red vest, a white checkered shirt, a jeans jacket, and a red undershirt.

Jeans and sneakers easily fill out the costume. Optionally, you can add the crazy rainbow hat Marty wears in the Back to the Future II or a homemade hoverboard for extra futuristic pizzazz.

Buy the All Over Print Marty McFly Costume T-Shirt here. 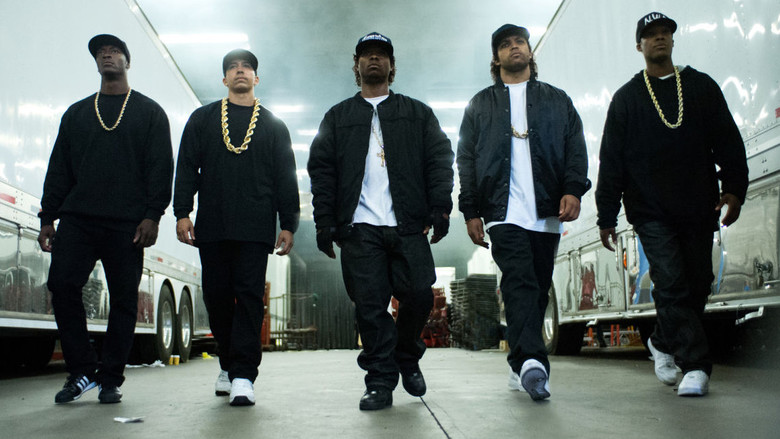 The legendary rap group N.W.A has seen a sudden resurgence in popularity thanks to this year’s thrilling biopic, Straight Outta Compton. Their signature look is fairly easy to reproduce, and you can maybe even recreate it out of your own wardrobe.

Necessities include a Compton snapback, a black crew neck or starter jacket, Dickies or jeans, and Nike Air Force 1s. A gold chain is a plus, as is any Raiders gear. And while I probably do not have to have to say so, it is important to note that using makeup to match complexions is not okay for Halloween costumes. so stick to matching the outfit. 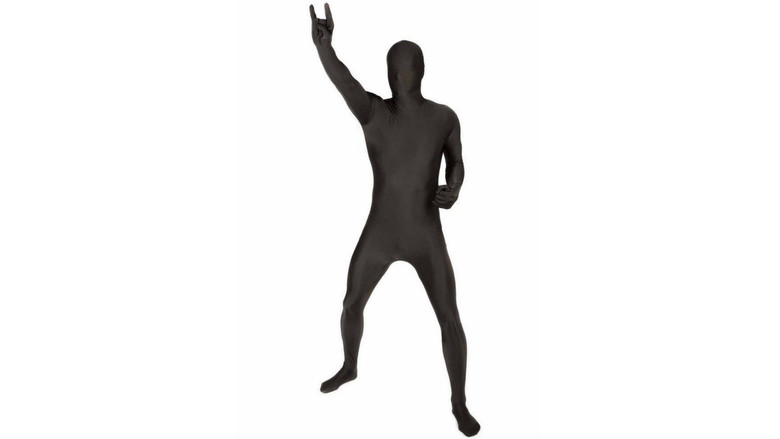 Another fun and easily accessible college Halloween costume is a classic solid-colored morphsuit, whose versatility lends well to last-minute creativity. For instance, a black morphsuit can you turn you into the night sky, a ninja, or somebody’s living shadow.

Another color can instead turn you into a cardboard box transformer, or a genie, or whatever else you want to become. There’s a good chance you already know someone with a morphsuit that could fit you, but even if you don’t this is a versatile clothing item that can be used for a great number of more complicated costumes. 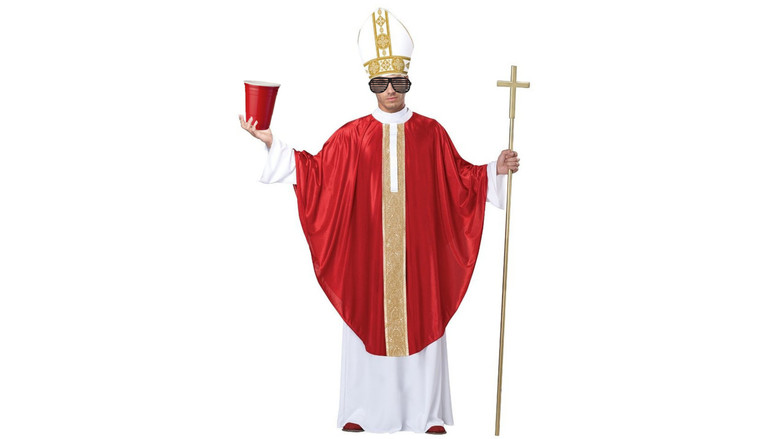 Following the recent Papal Visit to the United States, Americans have taken on a more accepting attitude towards the Catholic faith. However, these same people have most likely not met the religiously unaffiliated Party Pope.

If you were already thinking of going as the Holy Pope for Halloween, consider adding some extra flair with a hyperbolically easygoing personality fit only for a college partygoer. After all, our current Pope is awesome, but nobody’s saying you wouldn’t make a great Pope for a Day. Hence Party Pope. Give it a try.

Read More
College, Costumes, Halloween, Party, Shopping
wpDiscuz
0
0
Would love your thoughts, please comment.x
()
x
| Reply
A proper college Halloween costume is a must for any Halloween party, and we've rounded up some awesome options for a college budget.