We’re talking here about two big cultural touchstones in the U.S. — Halloween and the disco era. Halloween’s been around for several hundred years and has its roots in European pre-Christian traditions. In the U.S., people started dressing up for trick-or-treat somewhere in the mid-1900s. Disco, though, didn’t get up and boogie until the mid-1970s. The epicenter of the U.S. disco movement was a nightclub named Studio 54 located in midtown Manhattan but the disco inferno that was smoking hot all over the country was sparked by the movie Saturday Night Fever.

Although the disco era began around the same time, it was 1977, after the release of Saturday Night Fever, when disco really took off. To put it simply, the movie was about the emergence of the discotheque as the place to be, to be seen and to dance. The actor John Travolta played the movie’s lead role of Tony Manero and, even though Tony wore several different outfits when he was out (get it?), it was the character’s white leisure suit that became forever associated with the movie and the movement. 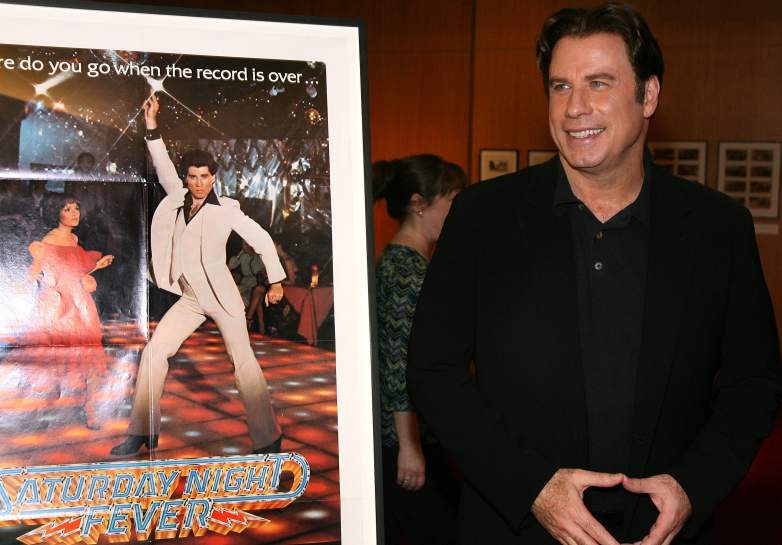 Take a look at this video, which shows highlight clips from the movie. It’s set to music by the Bee Gees, whose soundtrack for the film was another culturally important element of the disco scene.

As you can see, the ladies and gentlemen at the disco wore all sorts of different outfits, many of which can be (or, more to the point, could be) worn on an everyday basis. There were, and there continue to be, a variety of fashion accoutrement that helped define the disco look, for example platform shoes and gold chains. But, again, the entire movement weaved its way into the fabric of U.S. culture and, certainly, transcended the look established by the movie. Today, a great Halloween disco costume is, in many respects, a fashion look that was simply popular in the same general time frame. And it’s not limited to Travolta wannabes. There are great disco Halloween costumes for women, for men and for children. For crying out loud, you can even doll up your pooch in a Halloween disco costume for dogs. Whatever costume you choose from the list, you’re gonna look great. Just make sure you brush up on the moves before you hit the dance floor.

A terrific multi-patterned short dress that is long on style. This very cute little number is by California Costumes and it’s 100% imported polyester. It’s got a great overall look but probably it’s the sleeves — big “bell” sleeves — that make the biggest impact. This terrific Halloween costume for women comes with a head tie, which you could easily use as a scarf instead. As you can see from the picture, it looks great with go go boots, but be aware that the boots are not included. So take a look here because these boots come in all sorts of different colors, they’re very affordable, and they’ll work long after Halloween. If you’re interested in adding some fun detail, check out the leather bracelet here or these great agate bracelets. Also, some reviewers point out that the skirt is short, so something like these undershorts might be great for your ensemble (especially if you’re going to be busting some major moves on the dance floor). Whatever you do with this Halloween costume for women, you will very likely steal the spotlight at every party you hit. 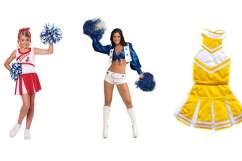 This three piece includes the top with the big flared bell sleeves, the pants with a split flare and a neck scarf. It’s all sequined 100% polyester from California Costumes. This would be a great Halloween costume to pair with some platform pump sandals or these peep-toe sandals. And for those of you who want the big dangly earrings, check these Humble Chic fringe tassel monsters out. As for the costume, some of the reviewers mention that you’ll lose some sequins (the piece is completely covered in sequins, so it won’t be noticed), but since it’s just for Halloween, consider it a magical dust that will cast a discolicious spell on anyone in your vicinity. 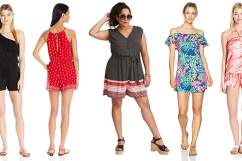 For the woman who prefers to rock a jumpsuit, we present this Disco Doll Costume from Dreamgirl. It’s a 100% polyester, black stretch knit fabric with a metallic holographic disco dot print. This Halloween costume for women does include the pink sequin belt. There are dozens of positive reviews about this costume, including a lot of purchasers who included photos of themselves wearing the outfit. Some of them point out that it might be a bit revealing, depending on the ratio of your fashion-to-modesty taste, so we’re suggesting you might consider something like a scarf shawl or a camisole. And don’t forget the platform shoes we mention in our second entry on the list because they would work perfectly here.

We realize that this entry on the list may go against the Halloween disco costume grain, but there’s a good reason we’re including it. This 100% poly dress is the same model worn by one of the actors in the movie Saturday Night Fever. In fact, when you look at the video we included in the introduction, you’ll see that disco wear was comprised of dresses, long sleeve shirts and slacks. This dress, from Rubie’s Costume Company (they say they’re the world’s largest costume designer and manufacturer), is officially licensed in a partnership between Rubie’s and Paramount Studios. We do want to point out that some of the reviewers say the fabric is not shiny, so if you want to add some appropriate bling, check out these fun disco ball earrings.

Whereas the previous entry in the list leans more legit, this gets back to over-the-top Halloween disco costume fun. For one thing, the bell bottoms are massive. It’s a silver and black model, but when you look at it you can see the colorful iridescence that this Halloween number emits. You could pair this with these platform shoes, although those big bell bottoms on this disco costume might steal the limelight. This costume is from Forum Novelties, which has been making Halloween costumes for more than 30 years. 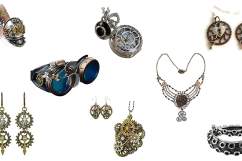 Of course we’re including this piece. Not only is the Saturday Night Fever white disco suit that John Travolta (as Tony Manero) wore one of the most iconic outfits in movie history, it’s also an emblem of an era. This great Halloween costume for men is pure imported polyester and it includes the jacket, the pants and a vest with an attached collar (there isn’t an attached shirt — it’s just the collar that makes it look like there’s a shirt underneath). Another option in this famous look is the very similar version offered by Rubie’s, which has a licensing agreement with Paramount. Note the subtle differences — the Rubie’s has attached cuffs coming out of the jacket and no buttons on the vest. To complete the ensemble, we’re suggesting a great, masculine gold or silver necklace and some rock solid platform shoes. For the larger Tonys among us, here’s a plus-sized version that works great. If the Tony Manero suit isn’t your gig, check out the rest of our list because in the words of Tony himself, “There’s this shirt I gotta buy. A beautiful shirt.”

This is when we endeavor to keep it real on the list and hew a lot closer to the way it really was in the first days of disco. As you could see in the introduction video about Saturday Night Live, the dudes on the dance floor wore poly pants and slick shirts — sometimes no jacket. Here, we’re recommending this great looking men’s sequin shirt from Underwraps. You will be a human disco ball in this thing. For a couple other great shirt options, here’s a metallic shiny tangerine piece or this one, also from Underwraps. We do want to point out that some of the reviewers mention that it’s see through, so you might want to wear a t-shirt underneath, like this silver muscle shirt or this silver V-neck. As for the bottom half of the ensemble, let’s talk pants first. Check out these silver pants, these white joints here or these here, and, finally, these great black numbers. And, now to the shoes, these models (platforms, natch) come in many different colors and patterns. We’ll be the first to say it: you look gooood.

Let’s face it, guys: part of the fun of Halloween is seeing just who it is at the party (or the office) who looks the funniest. You may sweep the awards with Smiffy’s Groovy Boogie Jumpsuit. This jumpsuit is, by definition, a one piece. The shirt is attached, so you will be snug as a little Halloween bug in this thing. While we’re talking jumpsuits, check out this blue “Groovy Dancer” joint. Whichever model you go with, you may want to up your head game with a cool (we use the word “cool” with a wink here) wig. Maybe the afro (in brown or black) is your style. Or this “Disco Dude Black Wig.” You wear this, and you will be as trick as they come. And if you want to include a big gold medallion, this should do the trick. For other great necklace options, take a look at this list of the Top 10 Best Gold Chains for Men. As for the Smiffy Groovy Boogie Jumpsuit, one last detail to point out: the zippered front means doing your biological business in the little disco dancer’s room will be a breeze (whew!).

The name says it right because this Halloween disco costume is gonna be darling on the girl who wears it. This disco costume for girls comes with two pieces: the dress and the scarf (both made from the same material and design). The sleeves flare very wide (and stylishly!) and would look great with some bracelets like these. The boots aren’t included, so take a look at these Secret Wishes white go go boots from Rubie’s. We do want to point out that some of the reviews talk about the skirt’s short length, so you may want to consider getting some athletic shorts or something similar.

This is a two piece costume for the lil’ Travolta in the family. The shirt, collared with an open V-neck, is gold sequin and the black pants are big bell bottoms. Both shirt and pants are polyester. Some of the reviewers point to out that the shirt is see through and some say it might be itchy for the wearer, so if you’re interested, take a look at this yellow V-neck for boys. Of course, the young dude sporting this ensemble may be showcasing such amazing moves on the dance floor, he won’t need the t-shirt for warmth. Lastly, let us perform due diligence and apprise you of the fact that Travolta’s white suit from Saturday Night Fever is available in sizes for boys. 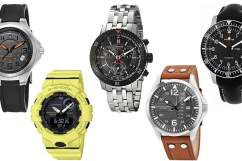