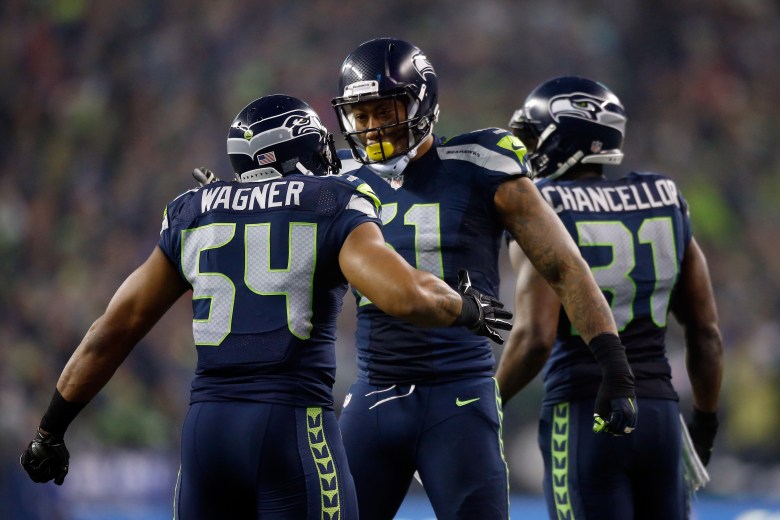 Seahawks defenders celebrate a touchdown in their win over the Panthers. (Getty)

The Seattle Seahawks defeated the Carolina Panthers 31-17, and will host the NFC Championship Game next week.

Seattle QB Russell Wilson had a phenomenal game, carrying the offense by throwing 268 yards and three touchdowns without a turnover. The vaunted Seattle defense took care of everything else, forcing three turnovers and sacking Cam Newton twice. They also got two interceptions, one returned for a touchdown. Carolina ran for 132 yards, but ultimately they were contained by the Seahawks, who are red hot and have now won seven straight games.

Read on for a recap of game highlights.

Richard Sherman is one of the best cornerbacks in the playoffs, and he proved it again here, picking off a deep pass attempt by Cam Newton.

Seattle Forced a Fumble and Recovered, Their Second Turnover of the First Quarter

You don’t get to be that good a defense without being extremely aggressive. A phenomenal play from Michael Bennett forced a fumble from Panthers RB Jonathan Stewart, and the Seahawks recovered easily.

The Seahawks took advantage of that turnover very quickly, as Russell Wilson alley-ooped a pass that Doug Baldwin caught easily for a 16 yard touchdown reception, the first score of the game.

Cam Newton capped off an eight minute drive with a seven yard pass to Kelvin Benjamin in the 2nd quarter, tying the game. Cam was 3-4 for 31 yards on the drive, and ran for 9 yards while he was at it.

Russell Wilson and Jermaine Kearse Combined For a Long Touchdown

Now that was some teamwork right there. Russell Wilson threw an absolute beauty of a pass right to Jermaine Kearse, and Kearse just kept on running until he hit the end zone. All in all it was a 63 yard touchdown pass that gave the Seahawks a 14-7 lead.

A Panthers Field Goal Ended the First Half 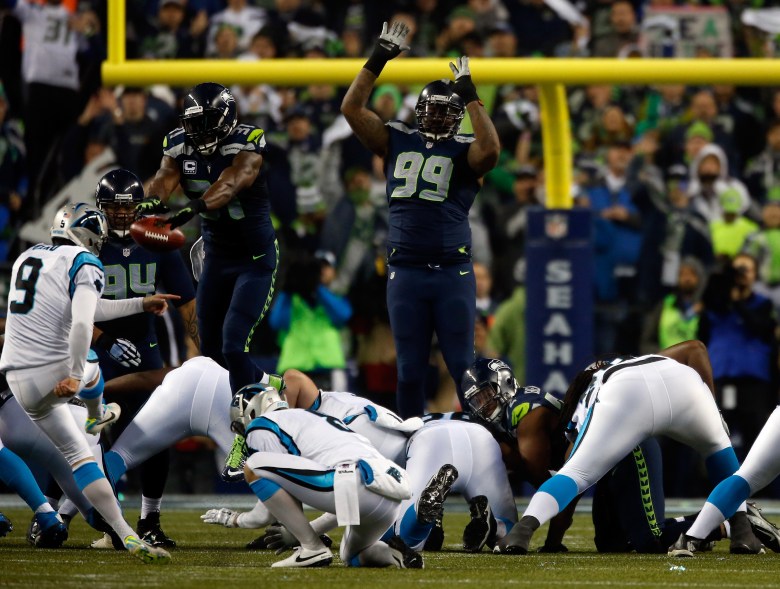 Well, technically two or three field goals did. The first field goal was negated by a false start. The second field goal attempt missed, but the Seahawks’ Kam Chancellor then got a penalty for running into the kicker. Finally on the third try, Graham Gano made a 35 yard field goal and the first half ended.

The Seahawks Got a Field Goal to Start the Fourth Quarter

The third quarter went completely scoreless after it ended with a big Panthers sack on Russell Wilson that stopped a six and a half minute drive. But on the first play of the fourth quarter, Seattle kicker Steven Hauschka kicked a 37 yard field goal to up the Seahawks lead to seven.

Literally while the FOX announcers were praising Russell Wilson for his third down throws, he threw to Luke Willson on 3rd and 10 an the result was a 25 yard touchdown. The touchdown made it a two possession game, and with the Seahawks defense playing the way it is that could very well put the game out of reach for Carolina.

Cam and the Panthers had a nice drive going in the hopes of a rally, but hopes were quickly dashed as Kam Chancellor picked it off and took it 89 yards for a touchdown, all but assuring Seattle of a win.

Benjamin Scored His Second Touchdown of the Game 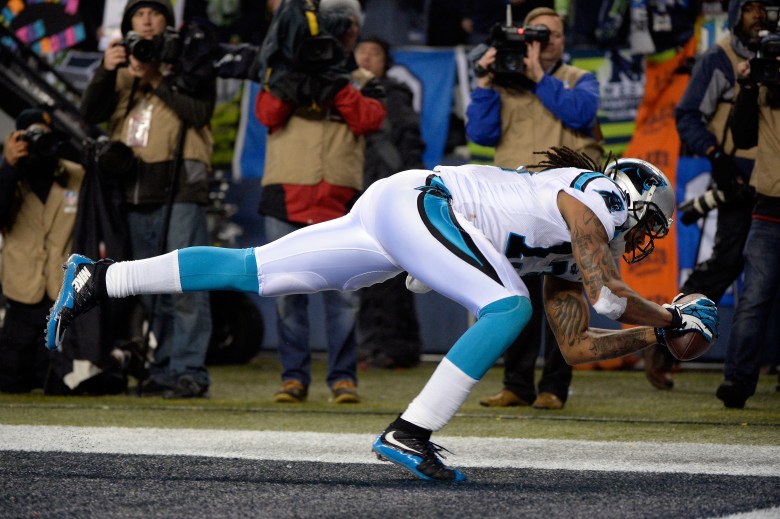 Despite the deficit, the Panthers kept trying to rally late in the game. With three minutes left, Newton hit Kelvin Benjamin for a 15 yard touchdown, his second of the game. But the Panthers offense never took the field again, and the Seahawks finished the game off handily.

Remember when Carolina was 3-8-1 and it was a joke that they somehow still alive? Now the Panthers are one of the hottest teams in football, and they travel to Seattle to take on the reigning Super Bowl champion Seahawks, the only team who might be on a hotter streak.

The Panthers (8-8-1) has won their last five games thanks to big production from the running game, and a marked improvement from the defense. The Seahawks once again had the number one defense in the NFL, only giving up an astonishing 185.6 passing yards per game. They’ve won six in a row, ending strong to capture the number one seed for the second straight year.

History suggests that we’ll see a close game tonight, if not a particularly offense-heavy game. In Week 8 of this season, the Seahawks narrowly defeated the Panthers 13-9, while last season they defeated Carolina 12-7. Don’t let the double digit odds fool you, this has the makings of an intense, close game to the very end. 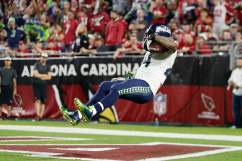 How to Watch Panthers vs. Seahawks Live Stream Online